[send private message]
This page has been accessed 581 times.

Its county seat is Jefferson. Marion County is in East Texas [2]

200 BCE The farming Caddoan Mississippian Indian culture in the area. .[2]
1541 Hernando de Soto expedition resulted in violent encounters. .[2]
1700s The Caddo had no immunity to the European epidemics of the Spanish and French missionaries such as smallpox, measles malaria and influenza epidemics. Many died, and the remainder moved to reservations. .[2]

1800s Shawnee, Delaware, and Kickapoo in the area.[2]
1840's - Monterey, Texas is located on Monterey Lake, about 18 miles NE of Jefferson on the Louisiana state line. This is in NE Marion county and was known as part of the {{red|Neutral Ground}}, was a haven for fugitives during this time. [3]

1870 Jefferson became the port to take commercial goods to and transport them out of the county. Marion County did not give up its commercial position of frontier Texas for 30 years, until the railway links bypassed its wharves mid 1870s. Deep South settlers contributed to 90% of residents from the Deep South such as Tennessee, Arkansas, Missouri, with their slave-based economy of plantations. [4]
1860 Texas legislature formed Marion County from Cass County in 1860 and named it in honor of Revolutionary War Swamp Fox Francis Marion. Many of its settlers had come from the lower southern states, bringing their slaves and the plantation method of farming cotton.[2]
1861- The county voted unanimously for secession from the Union. This county benefitted financially from Confederate government contracts.[2]

1860 total slave population of Marion County was 51%. The number of slaveholders were (213), but they dominated 60% of the county wealth and politics. [4]
1862-65 Marion County thrived throughout the Civil War. It obtained Confederate government. [4] contracts that contributed to its growing economy. It received commission to manufacture cannonballs and rifles for the Confederate States Ordinance Dept. (The Kelly Iron Works)
1862-65 J.B. Dunn's meat packing firm was authorized to supply tinned beef for the Confederate commissary. [4]
1865 -Defeat of Confederacy resulted in federal occupation- a violent period in its history. [4]
Feb.1869 - The "Mittie Stephens, steamboat, caught fire from a torch basket. A spark ignited a haystack olin the steamboat. People died from the fire or from getting caught in the paddlewheel when jumping overboard.. Sixty-one people died [2]
Oct 4, 1869 -George Washington Smith, a delegate to Constitutional Convention, was murdered by vigilantes while in jail. Union troops commanded by Gen. George Buell occupied Jefferson for the protection of the African Americans. [2]

1870 census ranked Jefferson second in commerce and industry among all Texas cities. New modern novelties such as gas lighting, artificial ice, modern refrigeration, soda water were used by all. [4]
1872-Cotton exports from Jefferson's wharves increased to 76,238 bales. Material wealth and commercial optimism plummeted during the mid-1870s. [4]
1878- The monopoly of Jefferson of trade of the 20 N Texas eastern counties by the construction of 2 east-west rail routes during the 1870s, linking the Grand Prairie farmlands directly with E markets. At this point, the flight of capital and skilled labor from Marion County began in earnest. [4]
1880- County lost 138 businesses, and resembled the other rural counties around it. [4]
1882- an election of Democrat dominated commissioners' court. Despite violence and intimidation aimed at the black majority throughout the remainder of the nineteenth century, African Americans. [4]
1898- Disfranchise of African American voters when the White Primary went into effect.[2] [4]
1900 businesses were 26%. Farms grew rapidly Large plantations were broken up, abandoned, or sold, or turned over to share croppers.Crops, Cotton, corn were leading,some livestock, cattle, swine. [4]
'1914 Marion Co. brick courthouse was built. Outside the building the Dick Taylor Camp of Confederate veterans erected a monument to honor the county’s dead in the American Civil War.[2]

1933-1937 Civilian Conservation Corps made improvements to the park. Its Army barracks and mess hall were converted to log cabins and a recreation hall. [2]
1945 row-crop agriculture was negligible; it produced no cotton and little truck-farm produce for the marketplace. [4]

1970 - Marion county had a rise of tourism, stimulated by the reconstructed and renovated Jefferson Historic Riverfront District and the recreation opportunities offered by Caddo Lake State Park and Lake o' the Pines. [4]

The Red River with its natural log-jams and snags resulted in the Red River Raft. This formed bayous and navigable lakes along the river valley. [4]

Marion County, Texas has had 2-3 courthouses.

It took 6 years ro raise the money, and complete the building the first courthouse was completed in 1874 near a plantation away from the downtown section of Jefferson. Designed by architect Thomas Hinkle, it was a rectangular, two-story, brick, Greek Revival style building with a gabled roof, full entablature and a front façade containing a portico with four massive, unfluted Doric columns and a pediment that had a diamond shaped window. The front had three bays and the side had nine bays of windows. Defective lumber in the building’s roof caused a leak over the judge’s bench and when the contractors refused to fix it, the county refused to pay them for their work.!! The county abandoned this building in 1876. It was later used as a school for African American children until it burned in 1937

2nd Courthouse, 1912-1913 The current brick courthouse was designed by architect Elmer George Withers in a Classical Revival style with receding porticoes on the front and rear sides and two, 2-story unfluted Doric columns framing the entrances. The building has a raised basement, an entablature and cornice surrounding the roof, balustrades over the front and rear entrances and a hipped roof covered with red tile. The courthouse is a virtual twin to the courthouse Withers designed for Roberts County.

POLITICS
After the Civil War, Republicans were in county political offices through the 1870s. The restoration of white conservative rule, commonly called "redemption," occurred 1882 with the election of a Democrat-dominated commissioners' court. Even with violence and intimidation toward the African Americans throughout the remainder of the nineteenth century, the people continued to deliver Marion County's majority for the Republican presidential ticket until the white primary effectively disfranchised them in 1898. From this point on, county voters returned a majority for Democratic presidential candidates in every election through 1996 except in 1956 when Republican Dwight Eisenhower carried the area, and 1984, when Ronald Reagan did. Republican George W. Bush carried the county with comfortable majorities in 2000 and 2004.[6] 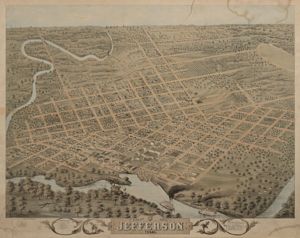 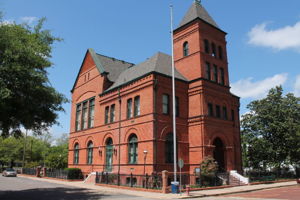 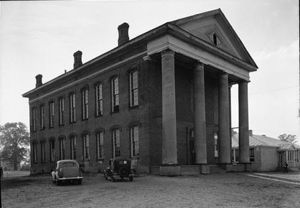 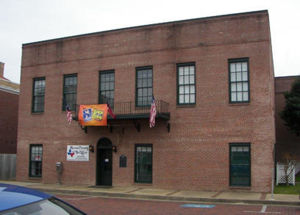