[send private message]
This page has been accessed 665 times.

1670 James Lederer, an English explorer discovered the Catawba Indians living in the Mecklenburg area. [1]
1700's Reports of migration to Mecklenburg area mostly from the North, traveling on the "Trading Path" ( an old Indian Trail), and from the South along the rivers from Charleston. The immigrants were predominately Scots-Irish and were not threatened by the Catawba Indians. [2]
1740 Pennsylvania, Maryland, and Delaware citizens migrated to Mecklenburg as explorers and traders. Here they found Catawba Indian villages in the area, who were peaceful people. They did not threaten the early settlers. [3]

1750's and 60's Churches and settlements and churches were formed by early families such as Alexander, Polk, Latta, Selwyn, Davidson, Harris, Graham, and Torance. Early churches were Sugaw Creek, Hopewell, Rocky River, Steele Creek, and Providence.[2]
Dec. 11, 1762-63 The North Carolina General Assembly formed Mecklenburg County after a petition had been sent to the legislators, effective Feb., 1763. The settlers picked the name of Mecklenburg as the wife of King George III, Queen Charlotte was from Mecklenburg-Strelitz, a German province. The county was formed from Anson county. Charlotte, North Carolina is the largest City in North Carolina.[3] [1][2][4]

Originally this county was very large as it contained these counties as well as the upper part of South Carolina in the first original county. [3][5]

1768 Old Tryon County was a former county which was located in the state of North Carolina. It was formed in 1768 from the part of Mecklenburg County west of the Catawba River, although the legislative act that created it did not become effective until April 10, 1769. This was due to inaccurate and delayed surveying.}} Tryon County encompassed a large area of northwestern South Carolina.}} It was named for William Tryon, governor of the North Carolina Colony (1765 to 1771).

Mid 1770's Citizens did not agree with British Crown policies. Mecklenburg citizens along with other citizens were resentful of the English. Leaders from each militia district gathered May 20, 1775 to figure out what action to take. [3]

See this for a history on the individuals who signed the MECK DEC [7]The history of Mecklenburg County from 1740 to 1900 by Alexander, J. B. (John Brevard).

Lists of Soldiers of served in the Revolutionary War

The Third Regiment was authorized Jan 16, 1776, by North Carolina Legislature, April 15, 1776 and organized with 8 companies. After Valley Forge Battle, the regiment had lost many, needing more enlistments. The 3rd was removed from the middle Department to the Southern Dept. After another recruitment, Nov 5, 1779, the regiment moved to Santee, South Carolina to protect Charlestown. Following the Fall of Charlestown, the 3rd surrendered (162 men). As more recruitments were found, they were sent with no uniforms or arms to South Carolina to help support Gen. Nathaniel Green. . They became a single unit, and in 1883 were sent to James Island until the war ended.[8]Third Regiment, Carolina

Mecklenburg citizens gladly accepted the “Hornet’s Nest” tag and the city’s official seal later portrayed it. On May 20, 1775, the “Mecklenburg Declaration of Independence” and it officially severed the area’s ties with Britain. Even though the North Carolina flag proclaims the May 20th date as the state’s institution, historians continue to debate the veracity of the Mecklenburg Declaration/“Meck Dec”).[1]

1799 A boy named Conrad Reed of Mecklenburg found a large shiny stone in a creek. His family used the stone as a doorpost. By 1803 the family learned this 17 pound rock was G O L D The Gold Rush began in Charlotte and Mecklenburg. By 1830 Miners and merchants were all over the area and settled there. Mecklenburg County became the gold Capital of the United States. A branch of the US Mint was later established in Charlotte. It is only fitting that Charlotte is the home of the largest assets bank of the USA. [1][3] [2][3]

"The Charlotte-Mecklenburg Story", presented by the Charlotte & Mecklenburg County Public Library. However the data is not shared online. One must visit the Library to see this. [2]

1810 The first brick courthouse was built for Mecklenburg.[3]
Early 1810-1850's Antebellum days were prosperous beginning with the gold, and the success of cotton plantations. [3]

1837 The U.S. Mint opened the first branch in Charlotte, NC. During the Civil War, the mint ceased operation. The building was used for other federal organizations until 1930. Then the mint was moved from Trade Street to Randolph Road and reopened as the Mint Museum of Art.[3]

1864 The Mint building which the Naval ordinance used during the Civil War for manufacturing weapons and ammunition was destroyed by fire in 1864.[3]
1865 During the Category:United States Civil War North Carolina records from the State Department of the Confederacy as well as the Great Seal were stored in the two story Mecklenburg County Courthouse. This year the last meeting of the Confederacy Cabinet occurred in Charlotte. [3]
1865-1872 Union troops invaded Charlotte during the and did not leave there until 1872. During the Category:North Carolina, United States Civil War, inCategory:Mecklenburg County, North Carolina the regiment which opposed the Union invasion was Category: 1st Regiment, North Carolina Artillery, United States Civil War[3] Charlotte, NC (2017 population 859,035)
Some history is available on the "Official" sites of each of the six towns of Mecklenburg. The links to the available sites are listed below:

1868-1870's Reconstruction - The Gold mines re-opened on a limited basis. The county did not compete as a cotton producer, but instead became the processing center. It opened (17) cotton mills. Charlotte was the important transportation and distribution center due to the railways and roads. [3]

1880 A private hospital opened in Charlotte. The public health service began forming in 1890. Soon the public library was opened. Graded public schools opened in Charlotte. Newspapers began reporting as well as telephones and electricity were installed. The towns of Cornelius, Davidson, Huntersville, Matthews, and Pineville were also established during this period.[3]

Late 1880-1890's Charlotte continued its growth and expansion. Industry and distribution were its economic factors. Textile plants, corporations began such as Charlotte Chemical Laboratories, the Lance Corporation, the Allison-Erwin Company with its influence on Charlotte's pre-bank economy.[1]

1897 Elizabeth College opened as a college for women to broaden their intellectual opportunities.
1900 Population in Mecklenburg County was 55,268.[3]
1917-18 World War I, population and growth here increased. An Army Training camp, Camp Greene was opened west of Charlotte. US Army recruits came from all over the USA to the Army training camp. Many of these men returned here to live after the war.The Charlotte economy decreased during this time.[3] [1]

1930 Population had doubled to approximately 110 625. The Depression ushered in economic hardships.[3]
1940 County Population was 127,971. Morris Field developed for World War II and was built around Charlotte, NC's airport. Charlotte Memorial Hospital, a general hospital opened.
1946 University of North Carolina at Charlotte was begun along with the City and County school systems consolidated in 1959.[3]
1960 Mecklenburg County had a one-quarter of a million (272,111) living here. More Education opportunities began.[3]

1971 A vote was taken to consolidate the governments of the City of Charlotte, and Mecklenburg County. The voters defeated the proposal 2-1 in 1971. City-County cooperation is being done for water, sewer, tax collecting have merged. This urbanization of the county is still growing.[3]

It is considered Charlotte, North Carolina is second to New York City as a leading financial banking capital in the USA.. [1]
Many historical, cultural, academic and entertainment centers are fin Charlotte-Mecklenburg County. Noted historical centers are: Charlotte Museum of History, the Latta Plantation, and the Hezekiah Alexander House. [1]

Four Academic centers or universities - The University of North Carolina at Charlotte, Queens University, Johnson C. Smith University, and Davidson College
Cultural attractions are: Charlotte Symphony Orchestra, the Mint Museum of Art, Opera Carolina, and the Charlotte Repertory Theater.
Athletic /Sports franchises are the Charlotte Bobcats (NBA) and the Carolina Panthers (NFL), are in the Charlotte downtown area
NASCAR’s Lowe’s Motor Speedway is located within the district as well.[1]

1700's-2000's Mecklenburg County was and is a image of diversity of citizens; beginning with the Catawba Indians to the Germanic, Scotch, Irish, English, Latin, African American, Middle Eastern, Balkan, Hispanic, and Asian immigrants and American.

2000's Mecklenburg County has progressed in the new millennium, with continued growth and prosperity. Development is continuing and carefully monitored to enhance the area rather than detracting from the area.Growth, however, is not taking place haphazardly. The city is the center of a (6- county) Statistical area known as (MSA). This contains over 1.4 million people. Union, Cabarrus, Anson Counties of North Carolina are part of this as well York County, South Carolina. [3]

Today MECK DEC and the Hornet's Nest is celebrated here. Mecklenburg citizens gladly accepted the “Hornet’s Nest” tag and the city’s official seal later portrayed it. Even though the North Carolina flag proclaims the May 20th date as the state’s institution to celebrate the MECK DEC and historians debate the veracity of the Mecklenburg Declaration .[1][3]

A vote was taken to consolidate the governments of the City of Charlotte, NC, and Mecklenburg County. The voters defeated the proposal 2-1 in 1971. City-County cooperation is being done for water, sewer, tax collecting have merged. This urbanization of the county is still growing.[3]

Location - Mecklenburg County may be found in the south central part of North Carolina.

Schools
The Charlotte-Mecklenburg Schools (CMS) serves the entire county; however, the State of North Carolina also has approved a number of charter schools in Mecklenburg County (independently operated schools financed with tax dollars).

of history near the Rocky River along the county line.

Quest of Cemeteries of the Enslaved In Mecklenburg County, North Carolina.- Genealogical Svcs, documenting and preserving slave cemeteries in the area. 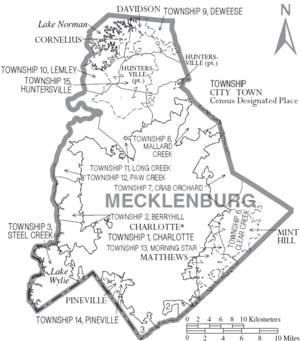 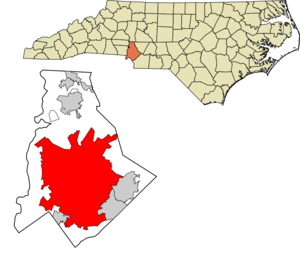 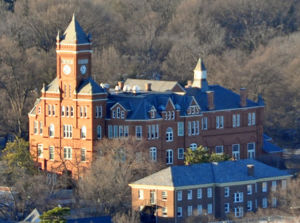 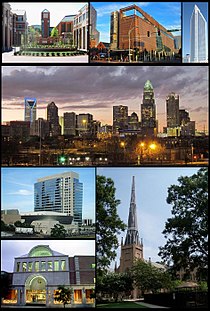