[send private message]
This page has been accessed 24 times.

The prison's history was one of overcrowding, lack of fund and out of date facilities. There was one period under the leadership of Warden Frank Conley from 1890-1921 where he had inmates working to construct prison buildings. He also had them assisting the state and community with building, logging and ranching.

After 1921, there was 40 years of poor managing, financial restraints and building degeneration. In 1959, a riot ensued where inmates held the prison until the Montana National Guard stormed the prison. While the riot raised awareness about the issues in the prison, most people were unaware of how bad it really was.

THE WARDEN'S OFFICE The Warden's office was located across from the prison for security purposes. The Deputy Warden ran the daily operations of the prison.

WARDEN FRANK CONLEY Warden Conley served as warden from 1890-1921. During these years, he made the prison a working prison with convicts being put to work on various projects. The convicts helped build many buildings on the grounds as well as the prison walls. In 1919, a friend of his donated money for the special building, a first of its kind in any prison...a prison theatre. They had concerts, prizefights, plays and movies. Conley used it as a way to discipline. Unruly inmates were forbidden access.

THE 1959 RIOT • On April 16,1959, Jerry Myles and Lee Smart led twelve inmates in a riot which left Deputy Warden Ted Rothe dead. • They took eighteen prison employees and five stool pigeon inmates as hostages, soaked rags with flammable liquid and threatened to burn them alive. • After thirty-six hours of mounting tension, Warden Floyd Powell implemented a daring rescue attempt. The National Guard fired a bazooka at the tower where the ringleaders were headquartered. Meanwhile, a team of men burst through the door in the west wall, crossed the yard, and entered the Cell House, freeing the hostages. • Myles and Smart were found dead of an apparent murder-suicide at the top floor of the tower. • Although the riot focused attention on the overcrowded conditions, it was twenty years before the last prisoners were moved to the new prison (from genealogicaltrails.com)

Jerry Myles had been in and out of reform schools and prison from the age of 16. He was described as unstable and psychopathic with an extremely high intelligence. Lee Smart was in prison for beating a traveling salesman to death. He was 17 when he entered prison and was sentence to 30 years.

INTERESTING CONVICTS Cell #1 was occupied by convicted murderer, Paul "Turkey Pete"Eitner, who was serving a life sentence. He became a model prisoner. Because of his excellent behavior, he was put in charge of the turkey flock at the prison. He began to lose touch with reality, selling the entire flock of turkeys to a gentleman who stopped to admire the birds at 25 cents a bird. At 89 years old, he passed away after 49 years of incarceration. His funeral was the only funeral held at the prison. Cell #1 was retired upon his death.

HAUNTING There have been many stories of paranormal experiences within the prison. They started about a year after the prison was closed. Many paranormal investigations have been conducted and in every investigation, unexplained experiences took place. While you can take self-guided tours of the prison today, you can also take "Ghost Tours" starting at 9:30 in the evening until 2:00 in the morning, that is, if you dare! 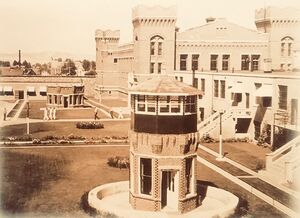 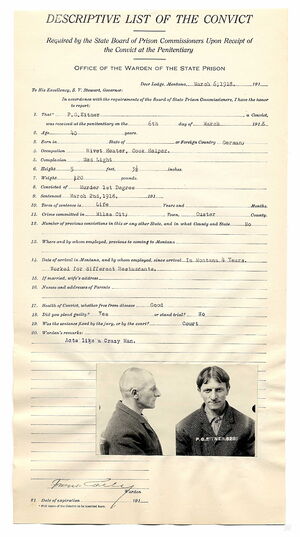