[send private message]
Last profile change on 13 Nov 2022
02:54: Susan (Ward) Merk replied to a comment on the page for Nash Name Study [Thank Susan for this]
This page has been accessed 1,269 times.

Please contact the Study's Coordinator, Susan Merk. If you have any questions, just ask. Thanks!

To add this category to a profile, you can add [[Category:Nash_Name_Study]] above the BIOGRAPHY line.

To add a sticker to a profile, add the following after the BIOGRAPHY line: {{One Name Study|name=Nash}}.

You can add the text above for people whose married name is Nash also.

This is a One Name Study to collect together in one place everything about the surname NASH and the variants of that name. There are other variants beyond the two listed. Others such as Nashche, Nasse, and possibly more ancient variants like Ate Nasse, Atten Asche, etc. The hope is that other researchers like you will join our study to help make it a valuable reference point for people studying lines that cross or intersect.

The English surname Nash is of a local origin, meaning that it is a name derived from the place where a man once lived or where he once held land. The source of the name can be traced to the Old English word "aesc" and the name itself is an abbreviated form of "atten ash", that is, "at the ash tree". Thus, the original bearer of the name lived at, or near, the ash tree which distinguished him from others who may have had a similar first name.

The name is recorded in English documents as early as 1221. In that year a Richard del Eshe is listed in the Assize Rolls for Worcestershire. In 1296 Ralph de Asche is registered in the Subsidy Rolls for Sussex along with Alice aten Eysse and John ater Aysse. In 1890, Henry Guppy published "Homes of Family Names" which identified that the name "Nash" was most numerous in the English counties of Hertfordshire, Buckinghamshire and Surrey.

The family, like it's name, is of Saxon origins. They were living in England before the Norman Conquest in 1066. In earlier times, the surname of Nash was found living in the counties of Oxford, Worcester, London, Suffolk and Lancaster. They were also located in Ulster, Ireland and Wales at the end of the sixteenth century.

Motto: In Utroque Fidelis (Faithful in Either Case)

Notable bearers of the name

Thomas Nash (1567-1601) English Poet, Dramatist and Pamphleteer. Born in Lowestoft and settled in London 1588. Later works include the satirical Pierce Pennilesse 1592, religious Christes Teares over Jerusalem 1593 and the comedy Summer's Last Will and Testament 1592.

Richard "Beau" Nash (1674 -1762) British Aristocrat. From 1705 he was the master of ceremonies at Bath and made it the most fashionable watering-place in England, introducing a more polished code of manners into general use.

Paul Nash (1889 -1946) British Artist. Born in London. Became famous for his paintings of World War I, such as The Menin Road, in which he created strange patterns out of the scorched landscape of the Western Front. In World War II he was appointed official war artist to the Air Ministry. His two most celebrated works are Totes Meer / Dead Sea and The Battle of Britain.

Rob Nash is a member of this study. 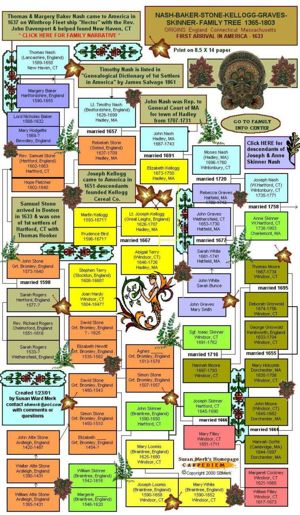 Leave a message for others who see this profile.
There are no comments yet.
Login to post a comment.
Scott Nash
I would love to join the Nash project and contribute and learn more about my own ancestry. Strange fact, I have the same or very similar code reading and mathematics skill as Noble Peace Prize winning mathematician John Forbes Nash. As well as the actor Russell Crowe who played the part of John in the move A Beautiful Mind being born on the same day and month as myself the 7th of April. Coincidence? I think not. Inherited DNA? Possibly.
posted May 17, 2021 by Scott Nash

Rob Nash
I would love to join the project - James Nash came west for the Gold Rush and died in Calif in 1851. His son Judge Richard "Uncle Dick" Nash was in the Newspapers quite often in the Star City and Reno areas. He was associated (not the judge) to the only 2 hangings in Reno, 1 ordered, 1 - 601.

I am totally interested in obtaining family information prior to James Nash (1797-1851) and helping however I can to others.