Origin as a symbol of Scotland

According to a legend, an invading Norse army was attempting to sneak up at night upon a Scottish army's encampment. During this operation one barefoot Norseman had the misfortune to step upon a thistle, causing him to cry out in pain, thus alerting Scots to the presence of the Norse invaders. Some sources suggest the specific occasion was the Battle of Largs, which marked the beginning of the departure of King Haakon IV (Haakon the Elder) of Norway who, having control of the Northern Isles and Hebrides, had harried the coast of the Kingdom of Scotland for some years.

When most people look at the Scottish emblem, it is not uncommon for them to wonder how such an insignificant plant made it to national emblem status. The thistle is also not the most attractive plant in Scotland, but what it is, is tough and extremely prickly. And just to add to confusion, exactly how the thistle came to be the national emblem, standing proudly next to the Scottish motto: “Nemo me impune lacessit”, meaning “No-one harms me without punishment”, depends on who you talk to.

Unfortunately, they did not know that the fields were home to thistles and when the Vikings stepped on the thistles the tough spikes of the thistles bore deep into their feet, causing the men to cry out in pain and agony. Of course these cries awoke the sleeping Scottish, who were able to fight off the advancing Vikings without much of a battle. Being saved from the Vikings by the thistles is definitely a good enough reason to make it a national emblem. In addition, it also bares characteristics to the Scottish such as their toughness and not being able to uproot them from their land without a fight.

The other version of this story is said to have happened in the 11th century and this time it was the Danes that tried to attack a Scottish castle. The Danes tried to approach the castle as quietly as possible and therefore they had removed their shoes. What looked like a moat surrounding the castle was very deceiving under the blanket of night. When the attacking soldiers jumped into the moat to swim across to the castle they were horribly surprised to realize that the moat was filled with thistles instead of water. Jumping barefooted into a lake of thistles led to the Danes retreating in pain.

The Order of The Thistle 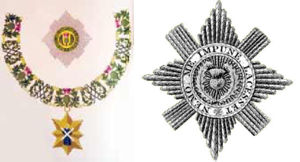 Another version of this legend attributes the legendary King Achius with the appropriation of the thistle. This King is said to have founded the Order of the Thistle in the ninth century, limiting the number of Knights to 13, including himself. Unfortunately, this story is yet to be proved, but there definitely is an Order of the Knights of the Thistle which commenced – or was refounded – by James VII in 1687. The Order has had a chequered history but today is firmly anchored in St Giles Cathedral, Edinburgh.

The Knights have the motto ‘Nemo me impune lacessit’, which translates as ‘No one assails me with impunity’, but is more commonly read as ‘Wha daur meddle wi’ me’. This motto is also used by Scotland as a nation and, thinking of the spiny prickles of the thistle, could hardly be bettered.

There is evidence showing that the Scottish Thistle was a recognizable symbol of Scotland as early as the 15th century.

It appears on silver coins that were issued in 1470 during the reign of King James III (1466 - 1488), and early in the 16th century it became an integral part of Scotlands' Coat of Arms.

Scottish Thistle - About the Plant

The Scottish Thistle, also known as the 'Cotton Thistle' and whose Latin Name is Onopordum Acanthium, is what's known as a 'biennial' plant, meaning that it takes two years to complete its' life cycle.

The 'basic' growth of leaves, roots and stems takes happens during the first year, the plant flowers during the second year, and then dies. Luckily these type of plants reseed easily and new plants will spring up around the original every year.

In fact, anyone who's actually encountered the Thistle will tell you that it 'grows like a weed', and that's the truth!

During its second year, this Thistle can grow up to eight feet in height, and over four feet in width. And when you remember that, in spite of the soft downy flowers, the bulk of this plant is covered in extremely sharp thorns, you can imagine just how impressive (and dangerous) it can be.

If you've ever stepped on a Thistle, you'll have some sympathy for the poor Vikings in the legend above.

The Thistle also has a very stubborn and invasive root system, and removing the plant from a piece of ground is not an easy task. If you miss just a little piece of the root, you'll find the Thistles come back in force the following year.

These physical attributes - the delicately beautiful flower heads, the viciously sharp thorns, it's stubborn and tenacious grip on the land, and its defiant ability to flourish in spite of efforts to remove it - I think that they make this plant the perfect Scottish Emblem

They're qualities that are very similar to those of Scottish people the world over, and they embody the overwhelming strength and spirit of the country itself

This is an "orphaned" profile — there's no Profile Manager to watch over it. Please adopt this profile.