[send private message]
Last profile change on 30 Jan 2023
14:02: Jillaine Smith edited the Text on Native Americans. [Thank Jillaine for this]
This page has been accessed 10,750 times.

Grandfather Great Spirit Fill us with the Light Give us the strength to understand And the eyes to see. Teach us to walk the soft earth as relatives to all that live.

The first peoples of the America's lived, hunted and cared for the lands in the America's for tens of thousands of years prior to European plantations. With these Plantations, Native Peoples were transplanted, moved or killed in order for the new arrivals to create nations. The treaties these nations signed with the native peoples fell aside and the european plantations expanded. Expansion across the continents created pockets of habitation and marginalized the once prosperous Native, indígenas, Aborigen, Amerindian, Guianas, Aboriginal, First Nations, Inuit, Métis, and Alaskan Natives.

In the US, colonization and western expansion created conflict between the Native Peoples and settlers.

As colonization began along the coasts of the US Native populations plummeted. The Colonists brought with them diseases that these populations had no resistance to. The tribal members who were not killed off were assimilated by other tribal communities.

At the end of the Civil War and the completion of Transcontinental Railroad,there were a number of Indian Wars. Over time, the United States forced a series of treaties and land cessions by the tribes and established reservations for them in many western states. In 1924, American Indians who were not already U.S. citizens were granted citizenship by Congress.

American Indian is of the soil, whether it be the region of forests, plains, pueblos, or mesas. He fits into the landscape, for the hand that fashioned the continent also fashioned the man for his surroundings. He once grew as naturally as the wild sunflowers, he belongs just as the buffalo belonged..
Standing Bear, Oglala Sioux
When you were born, you cried and the world rejoiced. Live your life so that when you die, the world cries and you rejoice.
White Elk 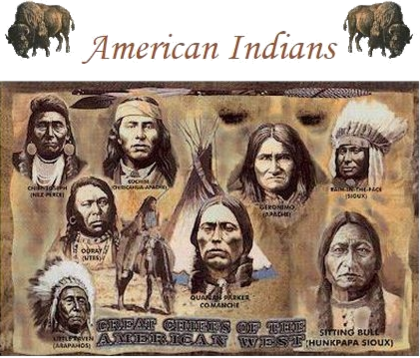 The Trail of Tears

The Trail of Tears was the forced relocation of American Indian tribes from southeastern parts of the United States following the Indian Removal Act of 1830. Including Cherokee, Muscogee, Seminole, Chickasaw, and Choctaw nations, among others,they were moved from their homelands to the Indian Territory west of the Mississippi River. More information about Trail of Tears.

Native Americans and the Buffalo

Beginning in 1878 the goal was to assimilate Indian people into the general population of the United States. By placing the Indian children in first day schools and boarding schools it was thought this would be accomplished. Federal policy sanctioned the removal of children from their families and placed in government run boarding schools. It was thought they would become Americanized while being kept away from their traditional families. Source: Access Genealogy 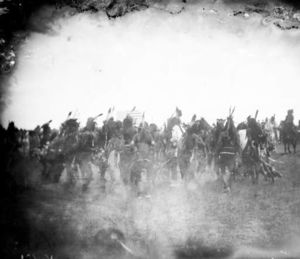 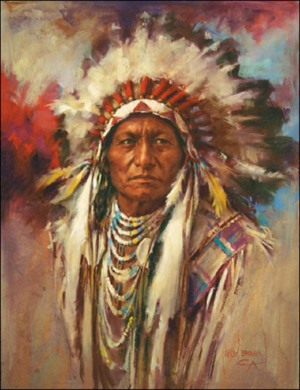 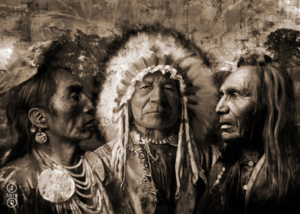 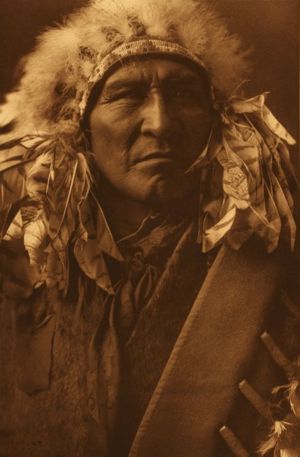 Kathie (Parks) Forbes
The profiles list is odd to say the least, and includes at least one mythical person (Mourning Dove). There is no way a single page can cover Native American History, it seems like the project page should be enough.
posted Dec 04, 2019 by Kathie (Parks) Forbes

Jillaine Smith
And Trail of Tears has its own page: http://www.wikitree.com/Space:Trail_of_Tears; should we move what's on this page to that one and link to it from here?
posted Dec 04, 2019 by Jillaine Smith

Jillaine Smith
Paula, too bad those decisions weren't documented anywhere so subsequent project leadership had something to follow or at least understand. The problem with both Moytoy and Doublehead is that the bulk of those "lines" is fictional. We've spent most of the last two years cleaning up those fictional profiles.
posted Jun 26, 2019 by Jillaine Smith

Paula J
We adopted the Tribe as last name when we noticed the duplicates that were made because of the policy at the time to name all indigenous peoples with last name Unknown. This was shortly after we put the project up. It started as a subproject to Westward Ho! named American Indians which only covered the western tribes. We got a lot of request for inclusion of Northeastern tribes. We consulted a Cherokee Nation member who strongly suggested we change the name so we did and made the sub a full project that covered all Native Americans. At that time we adopted Tribe as LNAB.

Later through member discussion, there were two famous lines they agreed should be given the last name they were popularly known by due to the continuation of multiple duplicates for these profiles. These were Moytoy and Doublehead. That part was changed after the project changed hands. It was a good idea and there were other famous lines that could have benefited from this idea due to the huge size of the Cherokee tribe and a few Plains Indian Tribes. Now, with the significant improvements with the matching system when adding a profile, that naming convention addition may no longer be needed. However, the name Moytoy is of great historical significance.

Jillaine Smith
We now have a project page for Reliable NA Sources; I'm going to move the Sources section out of this page and onto that one.
posted Dec 17, 2018 by Jillaine Smith
[Living Rankin]
I am interested in this project because many of my Creek ancestors were forced to march in the Trail of Tears.
posted Dec 07, 2018 by [Living Rankin]
Roberta (Nelson) Farley
Think it's important not to forget the Iroquois Nation tribes who left New York in the 1700's The Onieda Tribe( one of the seven nations) settled in Wisconsin and Minnesota .My maternal grandfather was about 50% Native American.
posted Jul 10, 2018 by Roberta (Nelson) Farley

Naming Guidelines should be included on the NA Project Page.