[send private message]
This page has been accessed 340 times.

Any records with ties to this location are welcome to tag Category: <Not yet determined>

This profile is part of the Neuenheim Heidelberg One Place Study.

There are two purposes behind the Neuenheim, Heidelberg One Place Study.

First, provide resources so that readers can gain an appreciation of the culture, history, and geography of Neuenheim.

Second, provide resources for those who are interested in conducting genealogical research on the inhabitants of this place.

Neuenheim is a district of the city of Heidelberg. Please see Image 1 for all the districts.

The district extends opposite Bergheim and the old town on the northern bank of the Neckar. The Heiligenberg with the Philosopher's Path is located in the east of the district on the border to Ziegelhausen . In the north Handschuhsheim joins. From Wieblingen in the west Neuenheim is separated by the Neckar.

Green Space: The ambitious character of Neuenheim as a residential area is underlined not least by its striking green spaces. Apart from the park-like green areas of the Neuenheimer Feld, the unique south slope of the Heiligenberg with the Philosopher's Path and the extensive Neckar foreland tower out.

Founded in 1386, Ruperto Carola is the oldest university in Germany and one of the most research-intensive in Europe. Count Palatine and Elector Ruprecht I opened the University of Heidelberg, with papal approval, in 1386 in his residence city. The founding rector was the Dutchman Marsilius von Inghen. https://www.uni-heidelberg.de/

Traces of settlement date back to the prehistoric period. From Roman times, fortifications and settlements of pottery industry can be archaeologically detected. Merovingian burial finds prove the settlement of the place in post-Roman times. From the Franconian epoch, a small industrial settlement can be found here. Similar findings have been discovered in Bergheim, which is the neighborhood directly south of Neuenheim and across the Neckar river. The rich clay deposits in Ziegelhausen, which at that time belonged to Neuenheim, as well as the favorable location on the main road to Frankfurt brought prosperity to the settlement.

The first documentary mention of Neuenheim can be found in 765 in the Lorsch Codex in connection with a grape donation. The connection of the archdiocese of Mainz or Worms counting village with the Palatinate Heidelberg is not without tension. During the time of Pfalzgraf Ruprecht I (1353-1390), Heidelberg must include Neuenheim in their court. In 1439, Neuenheim was recorded in the tax list of Heidelberg. In 1465, Neuenheim is even considered part of Heidelberg. The municipal law of 1831 finally brings independence.

Neuenheim was almost completely destroyed by the Thirty Years War (1618 to 1648). Therefore, its late medieval and early modern buildings are few. One of those is the late Gothic tower of the old St. John's Church. Old village structures, such as irregular lanes and single-storey gabled houses, can only be found around the market square.

Its present "urban" appearance takes place in the sign of Gründerzeit city expansion. This is initiated by the construction of the second Neckar bridge, the Friedrichsbrücke (now Theodor-Heuss-Brücke) in 1877. The extremely fast urbanization of Neuenheim largely destroys the simple original building and social structure of the former peasant, winegrower and fishing village.

Since the middle of the 19th century, scattered mansions of wealthy Heidelberger change the architecture on the edge of the village. They arise on the northern banks of the Neckar opposite the old town and on the west slope of the Heiligenberg. The upswing that continued in the 20th century allows the former farming village to expand west, north and east. New residential areas with a high number of listed buildings are being built.

The university also begins to expand to Neuenheim: in 1912 with the Physical Institute on Philosophenweg and in 1915 with the Botanical Garden in Neuenheimer Feld. The construction of the Ernst Walz Bridge in 1928 sets the course for the consistent implementation of the university extension, which transforms the western Neuenheim, previously dominated by fields and gardens, into a center of science. Since the 1950s, Neuenheimer Feld has been home to scientific institutes and research institutes of world renown, including the German Cancer Research Center (DKFZ). Even today, the development is not yet completed: This is shown by the buildings of the head clinic and the technology park built in the 1980s.

Here is a list of online resources to check if you have ancestors from Neuenheim:

In trying to determine the proper category on WikiTree, this is what I have learned.

In English (not the right language to use, just an aid):

According to http://gov.genealogy.net/search/name, the proper German language would be:

The proposal for category would be: Neuenheim_Heidelberg , which would nest under the current category: Heidelberg, Baden-Württemberg

Please comment or leave a message if you have thoughts! 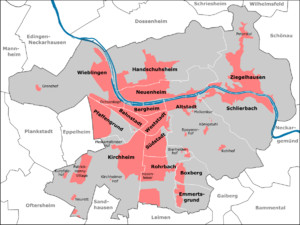