New Jersey in The Great War

[send private message]
This page has been accessed 342 times.

New Jersey in The Great War

Jan. 31, 1917 Germany, in its final effort to win the war against the Allied Powers, announced publicly it was resuming unrestricted warfare. (the U-boats). United States broke off diplomatic relations with Germany. However soon a German U-boat sank the American liner," Housatonic". A British steamer was able to rescue the 25 Americans on board!

This led states on the coast of the United States to start worrying a U boat might attack their ships or even fishing boats. Shortly 4 more Merchant marine vessels were sunk.

Feb. 24, 1917, the release of a disturbing the “Zimmermann Note,” a coded telegram from German Foreign Secretary Arthur Zimmermann to Count Johann von Bernstorff, German ambassador to Mexico. This was deciphered which stated Mexico should be requested to enter the war as one of Germany's allies. In return, Germany planned to return Mexico's lost territories of Texas, New Mexico, Arizona to Mexico. When this was published, America was ready for war against Germany.

The first commander of the camp was Major General Chase W. Kennedy, who formed the 78th U.S. Infantry Division and initiated troop training. The 78th was organized on 27 Aug 1917 and the first elements departed for France in May 1918. The 78th distinguished itself in combat in France suffering 7,245 casualties. The 78th returned to the U.S. on 6 Jun 1919 and was demobilized.

At the end of the war Camp Dix became a demobilization center and later a training camp for the National Guard, Reserve and active army personnel. The camp was placed in caretaker status from 1926 to 1933. Between 1933 and 1939 it was a processing and replacement center for the Civilian Conservation Corps (CCC).

Infantry Divisions were too large to move intact on single ships so it could take a division a month or two to reassemble on the European side. The typical U.S. infantry division contained about 1,000 officers and 27,000 enlisted men. The largest available troop ship, the Leviathan, could deliver 12,000 men a month. Troops were sent directly to France or via England. Some 2,084,000 U.S. troops reached France and 1,390,000 saw active service on the front lines.

When the armistice took effect on 11 Nov 1918 many of the embarkation camps became disembarkation camps. The returning National Army and the National Guard troops were, for the most part, sent back to one of the training camps for demobilization. The process of returning the troops home from overseas took place at even a faster pace than sending them over. Most troops were returned to the states and demobilized by mid 1919. The training camps and the embarkment camps closed as they completed the the demobilizing process for their returning division(s).

Many of the training camps had established large hospital complexes to treat wounded returning soldiers and these remained open even after the camps had closed. The realization that many of the wounded would require lifetime care gave rise to the Veterans Administration (VA) hospital system.

At the end of the war Camp Merritt became a disembarkment center, reversing the embarkation process until it was abandoned in 1920.

In 1924 a monument to the 563 personnel who died at Camp Merritt during the 1918 influenza epidemic was placed at the former center of the Camp.

Soldiers being mustered out at Camp Dix. New Jersey 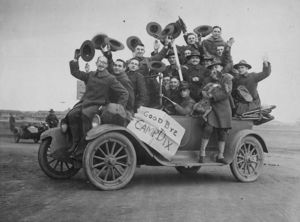 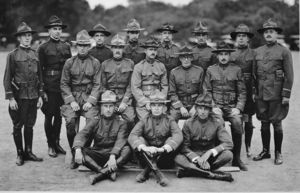 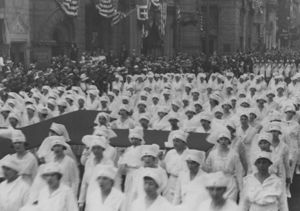 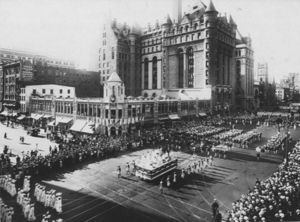