[send private message]
This page has been accessed 1,869 times.

Part of the New Zealand Project

The goal of this project is to identify and commemorate those who signed the 1893 Women's Suffrage Petition in New Zealand.

There is a searchable database of the signatories of the largest of the 13 petitions presented to the New Zealand Parliament on 28 July 1893. That petition contains the names and addresses of about 24,000 women aged 21 years or older, out of the 25,520 who signed it.

Once you have found a name in the database, click the 'more' link to the right of the name. This takes you through to a separate page for each woman; the profiles marked in bold have additional biographical details about her. Don't forget to cite your sources when adding the sticker: there is a pre-written source citation at the bottom of each individual's page.

The other twelve smaller petitions containing more than 6000 names do not appear to have survived, except for the names of the women who presented those petitions to Parliament.

UPDATE: The signatories to the 1892 petition are now accessible online and the sticker may also be used to commemorate those who signed that petition.

This template is for profiles of those who signed the New Zealand 1893 Women's Suffrage Petition.

This displays the following:

The Women's Suffrage petition is on display at the He Tohu exhibition in Wellington, New Zealand.

History and significance of the petition

Like most Western democracies in the 19th century, the right to vote in New Zealand was initially restricted to men who met certain property or other financial tests. The franchise for Parliamentary elections expanded to allow all Māori men to vote from 1867, and all men from 1879. Women who owned property in their own right could vote in local elections from 1873.

The campaign for women's suffrage in New Zealand began in the 1870s, but from the late 1870s to the early 1890s, several attempts to change the law to allow women to vote in Parliamentary elections were unsuccessful - sometimes losing by as little as one vote.

A branch of the Woman’s Christian Temperance Union was formed in New Zealand in 1885, and proved to be strongly influential in campaigning for women's suffrage, under the leadership of Kate Sheppard. There was a strong connection between temperance movements and women's suffrage campaigns, as it was expected that women would vote for candidates in favour of tighter controls on alcohol.

Women's suffrage campaigners organised a series of petitions to Parliament - the 1891 petition gathered over 9,000 signatures, and the 1892 petition contained almost 20,000 signatures. The third and last petition, of 31,872 signatures, was the largest petition presented to the New Zealand government up to that time.

It was dramatically presented to Parliament on 28 July 1893, and when Parliament debated a change to the legislation to allow women aged 21 or over to vote in August, the legislation was passed by a narrow margin. The Electoral Act became law on 19 September 1893, and despite the tight timeframes to enrol to vote, nearly 70% of eligible women voted in the general election held on 28 November 1893.

Further information about the New Zealand women's suffrage movement, the petition and the women who signed it: 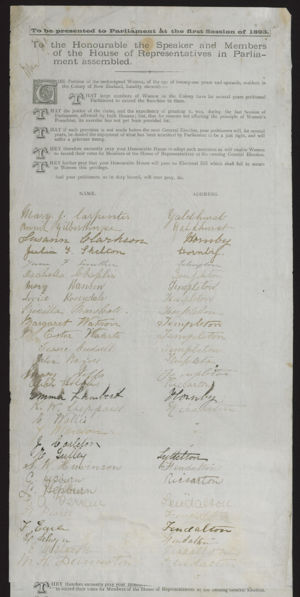 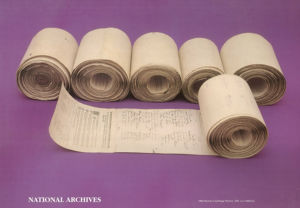 Jackie Stoddard
my 2nd great-grandmother was an Adams by birth , married Rowlandson

she was a Signer / Suffragette