[send private message]
This page has been accessed 1,316 times.

The Nisbet Name Study project serves as a collaborative platform to collect information on the Nisbet name. The hope is that other researchers like you will join the study to help make it a valuable reference point for other genealogists who are researching or have an interest in the Nisbet name.

As a One Name Study, this project is not limited to persons who are related biologically. Individual team studies can be used to branch out the research into specific methods and areas of interest, such as geographically (England Nisbets), by time period (18th Century Nisbets), or by topic (NisbetDNA, Nisbet Occupations, Nisbet Statistics). These studies may also include a number of family branches which have no immediate link with each other. Some researchers may even be motivated to go beyond the profile identification and research stage to compile fully sourced, single-family histories of some of the families they discover through this name study project.

To join the Nisbet Name Study, first start out by browsing our current teams to see if there is a specific study ongoing that fits your interests. If so, feel free to add your name to the Membership list below, post an introduction comment on the specific team page, and then dive right in!

If a team does not yet exist for your particular area of interest, please contact the Name Study Coordinator: Jean Skar for assistance.

ORIGIN Supposedly from the Northern Middle English "nese", nose plus either the Old English pre 7th Century word "bita" meaning mouthful, or piece of ground, or "byht", a bend (in a river). The place names could therefore mean either a piece of raised land shaped like a nose, or a bend in a river shaped like a nose. Interesting Nes and Bit in Norwegian would have a very similar meaning

The families of Swinton, Gordon, Ridpath and Dunse, derive their names from baronies contiguous to that of Nisbet ; and all five families bear the same arms, viz. three boars' heads, erased, but each of a different colour ; the arms of Nisbet being argent, three boars' heads erased, sable ; of Swinton, sable and argent, with a chevron or ; of Gordon, azure and or ; of Ridpath, argent and gules, with a chevron engrailed, also gules ; and Dunse, sable and or, with a chevron or.
The case seems to have had some analogy with that of the Teutonic tribes, who adopted some animal as their ensign, much in the same way as the Indians of North America did their " totem ", such animals, when coats of arms came into use, were displayed on their bearings.
The White Boar was the personal device or badge of the English King Richard III of England (1452—1485, reigned from 1483), and is an early instance of the use of boars in heraldry.
That the boar should have been so employed is not surprising. The bravest and strongest wild animal which inhabited the woods of the North is frequently mentioned in Anglo-Saxon literature, and its image was the frequent ornament of the helmet of the Northern warrior.
According to Norse Mythology, the god Freyr possessed a great boar Gullibursti (Golden Bristles) on which he rode. His sister Freyja had a similar boar Hildisvíni (Battle Swine).
Swintons claim--The Swintons are an ancient family who are reported  to have been given the name Swinton for their achievement in clearing the area of wild boar. The creature is prominently portrayed in the coat of arms with the motto j' espere - je pense.
Cockburns claim---In King Malcolm's days the denizens of this district slew many wild boars, for the forests swarmed with them; and being the favourite objects of the chase, the boar's head was assumed as their device of arms by the Gordons, the Swintons, and the families of Nisbet, Redpath, and Duns, &c., who took name from their respective territories, which lay contiguous in the shire of Berwick, "and carried three boars heads of different tinctures, by which it seems that the tradition is probable that they were ^mfd originally of one stock or gens, and afterwards An explanation for the use of Boars on the arms of Nisbet and others from this area.

The forests swarmed with wild boars, and being the favourite objects of the chase, the boar's head was assumed as their device of arms

Space:Publications_Nisbet_name_study Many have some incorrect conclusions printed within, accurate in parts and fatally wrong in other parts. Therefore, please use them merely as a hand-drawn road map and not as a 'bible'. Nisbet of Hardhill is very prone to errors.

Known lines with errors in publications 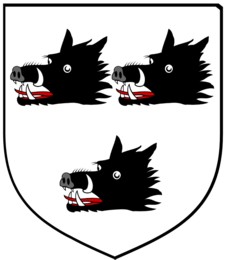