[send private message]
This page has been accessed 52 times.

Following information was copied from the duplicate profiles for the same person prior to merge & major edit. ~ 8 August 2020, Noland-165

by Sara Bodine (all baptized at Raritan, New Jersey):[20]

by Margaret Mollenauer (all born in Somerset County, New Jersey with the surname as Van Meter)[24]

'John VanMeter, Indian trader from New York', is said to have visited the valley of South Branch Potomac River (Wappatomaca) on an expedition with a Delaware war party sometime between 1725 and 1739. He was so impressed with the valley above 'the Trough' that he advised his sons to take up land there. This John VanMeter is usually identified as Joost Jansen VanMeteren, who as a boy kidnapped for 3 months by Minnisinks was so attracted to their lifestyle that he spent most of the rest of his life with them. His sons Isaac and Jacob settled in the South Branch Potomac valley. But consider that Joost Jansen was most likely aged only 3 (though possibly older) when kidnapped, and was last recorded at the christening of his first grandchild 30 Oct 1706, aged about 48 (or a little older) at Raritan [now Somerville], Somerset County, New Jersey. Curiously, no record of his death exists, but if he was still alive long after this, he would have been aged 65 (or more) when he participated in the war party. Perhaps a better candidate for 'John VanMeter, Indian trader from New York', is Joost's son John VanMeter, who would have been aged about 42 (or older) when participating in the war party. Though not father, but eldest brother, of the South Branch Potomac valley settlers Isaac and Jacob, he was considerably older than his younger brothers, and would have been a surrogate father to them if Joost had died in the early 1700s. Both John and his father, Joost, could have been described as 'from New York', though both would have been from New Jersey at the time of the war party. John was born in New York and lived there until he was aged about 20. Joost was born in Gelderland, but lived in New York from age 2½ (or more) to age 38 (or more).

VanMeter, Benjamin Franklin, Genealogies and Sketches of Some Old Families Who Have Taken Prominent Part in the Development of Virginia and Kentucky Especially, and Later of Many Other States of this Union J. P. Morton, Louisville, Ky., 1901. (Page: 149-156, Van Meters, as given by Mrs. Anna Louise Thompson, of Clinton, Iowa")[25][13]

John (or Jan Joosten) Van Meter was popularly known as "The Indian Trader."[26]

1730 - "Several years prior to the settlement of any portion of the Virginia Shenandoah Valley by the white man, a 'Dutchman' from New York, by the name of John VANMETER, accompanied a war party of the Delaware Indians on one of their excursions southward against their inveterate enemies the Catawbas. Near or upon the present site of Franklin, the county seat of Pendleton Co., West Virginia, a fierce battle was fought, in which the Delawares were worsted and driven back. VANMETER took part in the battle and escaped afterward with the defeated braves; and although he was on the losing side in this venture, he at once set about, with true German instinct, to turn his ill-starred trip to good account. He had seen the fertile bottom lands, all unoccupied, along the Shenandoah and the South Branch of the Potomac; he made application to Governor GOOCH for a grant of land, and obtained 40,000 acres in the lower part of the Valley. It was VANMETER's grant that Joist HITE purchased in 1732, when he and his party settled on the Opequon River."

Berkeley County (Virginia until 1863) was created in February 1772 from the northern third of Frederick County, Virginia. At the time of the county's formation, it also consisted of the areas that make up the present-day Jefferson and Morgan counties. Winchester is in Frederick County (Winchester is independent of the county but is the county seat). Opequon is shown in the following map of modern-day Frederick County; Opequon is also a magisterial district of Berkeley County ("Adam Stephen/Opequon").[27] See the 1770 and 1772 maps at Virginia Formation Maps to see Frederick county before and after Berkeley county's formation. 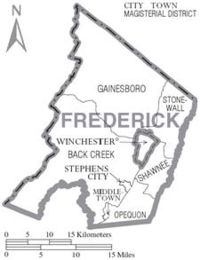 A charter for the town of Winchester, secured by James Wood and Lord Fairfax in February 1752, described the "parcel of land, at the courthouse in Frederick county" that "James Wood, gentleman, did survey and lay out..., in twenty-six lots of half an acre each, with streets for a town, by the name of Winchester..." (Winchester, Virginia and Its Beginnings, 1743-1814, by Katherine Glass Greene, p 33).

John Van Meter had land along the Opequon, as described in Greene's book: "One [record by James Wood, surveyor for Orange county], dated December 24, 1735, reads:

Surveyed for John VanMetre 50 acres of land in Orange county lying on the north side of Opequon Creek and opposite to another tract of land formerly surveyed for the said John VanMetre, it being within the limits of 100,000 acres granted by order of Council to Alexander Ross and others."

In 1743, Frederick County was formed from Orange County.[28]

"Opequon Creek is a 64.4-mile-long tributary stream of the Potomac River. It flows into the Potomac northeast of Martinsburg in Berkeley County, West Virginia, and its source lies northwest of the community of Opequon at the foot of Great North Mountain in Frederick County, Virginia. The Opequon forms part of the boundary between Frederick and Clarke counties in Virginia and also partially forms the boundary between Berkeley and Jefferson counties in West Virginia's Eastern Panhandle." (from Wikipedia article, accessed August 3, 2014)

see also: Berkeley County, Wikipedia article (accessed August 3, 2014). "The next known explorer to traverse the county [after John Lederer in 1670] was John Van Meter (1683–1745) in the 1730s. He came across the Potomac River, at what is now known as Shepherdstown, then he made his way to the South Branch Potomac River."

The family settled in the Shenandoah Valley of Virginia where Jan became a wealthy land owner and horse breeder. "Kegley's Virginia Frontier in describing the earliest history of Virginia, says: 'The Van Meters cross the Powtomack (Potomac River). John and Isaac Van Meter were traders who knew the country about the Potomac and the Shenandoah as early as 1728. After 1721 Isaac lived in New Jersey, but John had moved westward toward the southwest part of Maryland.[20] Around 1725, John was living in Monocacy valley, Prince George's County, Maryland.[29]

Jost Hite with Robert McKay began acquiring land in the Shenandoah Valley in 1731. They with one hundred families were desirous of seating (settling) themselves on the back of the Great Mountains on land lying between the land of John Van Meter, Jacob Stover, John Fishback and others. ... Hite acquired the Van Meter grants in 1734 and patents began to issue to his settlers, one thousand acres to each family ... joining the land of 'Jost Heyd' and others.[20]

"Mrs. Sims' article (material provided by Mrs. Ruth Bruner Sims of Frankfort, Kentucky) says John Van Meter and his brother Isaac, were granted 110,000 acres of land in the Shenandoah Valley by the Royal Governor, William Gooch, which they later sold to their cousin, Jost Hite, after selecting choice sites for themselves, while it was still a wilderness."[20]

Will of "John Van Metre in Frederick County in the Colony of Virginia" written August 13, 1745

His will includes details on bequests of his extensive land holdings. It also mentions a riding horse and two breeding mares.

Because of confusion in the use of patronyms and about the identity of the "Indian Trader, John Van Meter from New York" (who is this John (Van Meter-2), aka Jan Joosten), his name is sometimes give as Jan Jansen or other variations:

1794 Virginia Court Reports
From District Court of Winshester. Pendleton v Vandevier
JOHN VANMETER, Will 13 August 1745, died prior to September 1745.
Issue, two children: Abraham Vanmeter, who has issue; Madgalena born 1744, married and has issue a daughter, Prudence, born 1744, died 1769, and a son who died in infancy.
Jacobus Vandevier had son James Vandevier. Their connection with Vanmeter is not shown.
Virginia Wills
.........