The following timeline has been created in the hope of clarifying Weston ownership and descent of Old Wilsley, but any events connected with the property should be added to it.

1594: Thomas Lawes left Wilsley in Cranbrook to his daughter Katherine and her husband clothier William Sheafe.[1]

9 Nov 1669: It is presumed that John Weston purchased Old Wilsley from Edmund's son Harman Sheafe[1] about the time of his marriage to Elizabeth Hovenden.[3]

Late 1600s: According to Christopher Hussey, Wilsley was originally a 15th-century hall house, owned by a succession of Cranbrook clothiers between the late 1400s and the late 1600s. The house consists of two parallel timber framed ranges, separated by a small inner court. The division of the hall and the insertion of the chimneys is thought to have taken place in about 1530, with the oriel window and the panelling of the main rooms added about 1600. In the late 1600s, John Weston, the last of the Cranbrook clothiers to live at Wilsley, added the casement windows in the gable wings and remodelled the ground and first floors of the north wing. A series of delightful painted panels in the former chapel, now known as the Painted Room, dates from this period.[4]

After 1721: The George Inn had belonged to "Thomas Tipping, whose Widow Mary disposed of it to John Weston of Wilsley, one of the last of the clothiers in the town."[6]

9 Sep 1754: Captain John Weston left Old Wilsley to his widow Elizabeth during her lifetime and thereafter to his son Lieut. John Weston and his heirs.[8]

23 Jun 1765: Lieut. John Weston made provision for his father's youngest children, Elizabeth, Jane, George and William, all born after the date of their father's will, by leaving them the Cranbrook property, including Old Wilsley in his own will.[8]

1786: On the death of Elizabeth Weston, widow of Captain John Weston, Old Wilsley passed to their younger children including William Weston.[10]

1798: At Upper Wilsley, which is a small hamlet almost adjoining to the north-east end of the town, is a seat, for several generations inhabited by the Westons, several of whom lie buried in Cranbrooke church yard, though some of their inscriptions are obliterated through length of time. They bore for their arms, Three lions heads, erased and crowned. John Weston, clotheir, resided here, and died possessed of it in 1694. John Weston, gent. his grandson, died possessed of it a few years ago, whose widow, is become entitled to the possession of it, for her life, and now resides in it.[11]

9 Mar 1838: On the death of William Weston, a life interest in Old Wilsley passed to his wife Louisa Beale.[15]

17 Jan 1856: On the death of Louisa Weston Old Wilsley passed to her husband's four sons and their male heirs thereafter.[15][16]

1863: The house was let to the Cranbrook Colony artist George Bernard O'Neill, who featured the house in many of his works. The hall, with its distinctive panelling and bay window, for example, is the setting of "The Squire's Party".[1]

1871: Old Wilsley was purchased by retired Col. Boyd Alexander and in 1906 his son Herbert exhibited a painting of the house entitle 'My home'. The house remained in the family until 2006.[1] 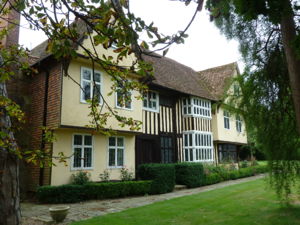 The Painted Room at Old Wilsley 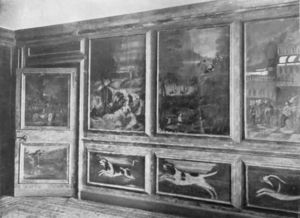 'My Home' by Herbert Alexander, ARWS 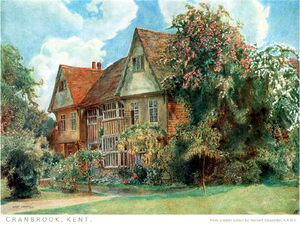