12,000-15,000 years ago Clovis points and spearheads have been found to provide evidence that the area was occupied 12,000–15,000 years ago. [2] Native Americans in the area were Atakapa Indians (the "man eaters"); early inhabitants left shell remains of houses and burial mounds. Theirs was a hunter-gatherer and fishing culture.[2]
1519 Alonso Álvarez de Pineda, under the Spanish flag, mapped the coastline, and named the Sabine River (San Francisco de Sabenas) after the cypress trees he found. [2]
1713 Louis Juchereau de St. Denis founded the French colony, Natchitoches (east of the Sabine River in La Louisiane). Missions were established by the Spanish. [2]
1718 French traders had crossed the Sabine and were freely operating. [2]
1763 France ceded La Louisiane to Spain at the Treaty of Paris. [2]
1803 Napoleon reacquired Louisiana Territory in 1800, and promptly resold it to the US, leaving the western border of the US not clearly fixed at the mouth of the Sabine River. [2]
1806-1821 - General H Herrera (representing Spain) and General James Wilkinson got together and formed the Neutral Ground agreement. Thus the area located between Sabine River and Arroyo Hondo would be free of troops of either Texas colony or the United States to the East. Without government, this land was occupied by misfits of all types. Spanish occupation ended in 1821 after the Mexico won its independence. Following this the Republic of Mexico governed Texas colonies.[3]
1821 Mexico wanted colonists, and offered land grants. Settlement began.
1826 Joseph Vehlein obtained colonization rights for territory between the 29th and 33 parallels. [2]
1834- 35 Rights were transferred to the Galveston Bay and Texas Land Company. [2]
1837 U.S. mapped Sabine Lake and Sabine River, to remove snags and debris along Sabine Lake and the Sabine River in 1837. The first steamboat to navigate the Sabine River, the Velocipede, arrived shortly thereafter. Early settlers to the area included many Americans from bordering states. [2]
1850 Census shows settlers arrived in Jefferson and Orange from Louisiana, Mississippi, Tennessee, and South Carolina.[2]
1852 Orange County was formed 1852 from portions of Jefferson County. It was named after the common citrus fruit grown by the early settlers of this county near the mouth of the Sabine River. Due to periodic frosts in Orange County, it is no longer the home of orange trees and citrus orchards. The citrus agriculture has been moved farther south in search of milder winters, and away from the periodic frosts. The trees moved to the Rio Grande Valley.[4]
1858 There was confusion between county seat of Madison with Madisonville, so the county seat's name was changed to Orange and the town was incorporated.[2]
Slavery - Slavery movement
1861 20,000 bales of cotton were shipped from this growing port city. In 1857 the population was 1,277, including 282 slaves and 26 freed blacks. True to its predominantly southern majority, Orange County voters supported the Democratic Party in the elections just prior to the Civil War.[2]
1862- 65 Civil War - Orange mustered several military units during Civil War such as the Orange Greys and the Orange Light Guard. A nearby naval encounter in 1863, the Battle of Sabine Pass, successfully halted the Union army's advance into Texas. Orange survived the war intact but was decimated only five months after the armistice, when a major hurricane hit the town on '
Sept 13, 1865. A major hurricane hit the area and destroyed Orange.[2]
1870 county population in 1870 dropped to 1,255. [2]
1876 Texas & New Orleans Railroad, which had arrived in Orange in 1861 and closed during the war, began operating again. [2]
1876 Henry Jacob Lutcher and G. Bedell Moore (of PA) opened saw mill and lumber plant. [2]
1880 County population grew to 2,938 as jobs became available in lumber, building construction, and ship building. [2]
1881 C. P. Huntington brought the Southern Pacific Railroad to Orange, a direct route from San Francisco to Orange to New Orleans. Orange became a major rail and port center. [2] The Opelousas or Old Spanish Trail crossed the Sabine only 10 miles N of Orange, TX. Cattle drives frequently ended at the Orange terminals. Manufacturing became a major contributor to the local economy as establishments increased from eight. [2]
1887 census showed Baptist, Episcopal, Methodist, Presbyterian and Catholic religions were all represented.[4]
1890 27 companies in Orange in 1890. [4]
1901 Orange Rice Mill was formed. [4]
1904 The Yell Mill (Equitable Bag), only mill in the world that used yellow pine shavings as a raw product. That year county population was 5,905.[4]
1916 Lutcher-Moore Lumber Company donated land to city of Orange to enable its port expansion. Both public and private wharf space was improved and expanded. The Sabine-Neches Waterway was dredged through Sabine Lake past Sabine Pass to the Gulf of Mexico, and the Port of Orange attained deep water operations and invited the further expansion of oil operations and chemical industries.[2]
1920 32 manufacturers processed and refined oil in the county $17,154,779[2]The number of employees at local plants increased during this period from 894 in 1900 to 4,130.
1922 Oscar Chesson Well began a new oil economy.[4]
1929-1930's Great Depression was a difficult period for Orange County. The population remained relatively stable but industrial establishments declined to 25 by 1930 and employed only 938 workers. [4]
1940 16 manufacturers and 527 employees. World War II defense needs led Orange County to a recovery: Shipbuilding.[4]
World War II, Orange County was the home of a large amount of shipbuilding for the navies of the United States and allied countries. The major shipbuilder, the Consolidated Steel Corporation, was located in the town of Orange, and among the warships that it built were the USS Aulick (DD-569) (1942), the first warship built there, the USS Pope (DE-134) (1943), and the USS Carpenter (DD-825) (1945–46), the last warship built there. During the war, the Consolidate Steel Corporation employed as many as 20,000 people at its shipyard in Orange, Texas.[4]

Orange County has had four courthouses:[5]

The area's plentiful supply of lumber encouraged the growth of early industries involved with ship building, paper manufacture, and wooden products. More recently, oil and gas production and refining have become the major source of economic growth and development. Salt domes, sand, and gravel are other natural resources of economic importance to the region.[6] Economic activities in Orange County are the petroleum refining industry, paper milling, rice farming, and shrimping.[4]

Orange County was formerly a center for the building of warships, and there is still a large U.S. Navy ghost fleet (reserve fleet) in Jefferson County - from which currently, many old warships are being cleaned of water pollution sources and then scrapped for their metals. Thus, there is still employment for residents of Orange County in shipbreaking.[4]

Orange County voters supported the Democratic party in the elections just prior to the Civil War. Unlike many of its neighbors in Texas and Louisiana, Orange County remained a bastion of Democratic strength throughout its history. Presidential returns from 1968 to 1992 indicated a strong Democratic plurality, with only the 1972 Nixon anomaly.[7]

The county is served by 5 school districts: 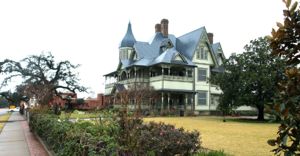 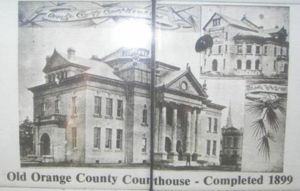 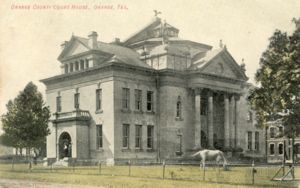 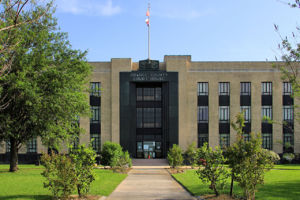 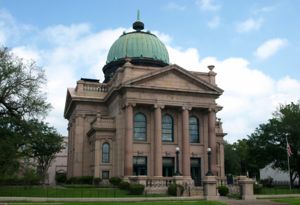