[send private message]
This page has been accessed 875 times.

The project called "I2a Y-Haplogroup", to which you belong, has over 2600 members. It is focused on haplogroups, or ancient ancestry going back thousands of years. The project covers the entire I-P37 haplogroup, but you belong to a branch called I-L161, and more specifically a branch we call "Isles-A". The Isles-A group is the same as the Y12072+ group and includes all the subgroups of I-Y12072.

The entire I-L161 group is nicknamed "Isles" because it is more common in Great Britain and Ireland than in continental Europe. But it is rare even in Britain and Ireland, less than 1% of men there belong to I-L161. A now-defunct DNA testing company gave the I-L161 group the nickname "The Deerhunters" which is supposed to mean that your paternal ancestors were already in Western Europe/Britain and Ireland well over 6,000 years ago, leading a hunter-gatherer life, before the arrival of new technologies, agriculture, new languages.

Timothy's DYS481=23 is unique among I-P37 Driscolls tested. There is one Driscoll DYS481=22, the remaining are DYS481=24 and DYS481=25. This is a marker with a high-medium mutation rate; at present, there is no reason to place particular importance on it. So far, there are no other STR mutations that would suggest a division between Timothy and other I-P37 Driscolls.

Timothy's STR matches in the project appear remote - not within a reasonably close genealogical timeframe. Out of five matches at 111 markers - the nearest one by Genetic Distance 102/111 - three matches are confirmed A14359, one is known to be closely related to a confirmed A14359. That leaves only one match who has not done sufficient deep SNP testing to know his terminal SNP.

Your Big Y found approximately 5 harmless mutations in your Y chromosome that weren't found in any other Big Y testers (these mutations are also called SNPs (aka unnamed variants/novel variants). Therefore we know that you don't have a recent common ancestor with any of the other Driscoll men who have tested Big Y (The Big Y test covers approx 75% of the mappable regions of the Y chromosome, the maximum that FTDNA presently tests). Approximately 8 of your Driscoll relatives, and approximately 4 additional men of other names who likely have a Driscoll paternal ancestor have also completed Big Y. They also had some private novel variants, and some of them share additional variants. Thanks to all of this, we can start to separate the O'Driscoll family into different branches, and calculate when the most recent common ancestor of each branch lived.

There are also some people who haven't tested Big Y, but who have A13665+ A13664+ A13904- A14359- results from individual SNP testing (or equivalent results). It's possible that if these families did Big Y we would learn that they are closer relatives to you. The families probably have a Driscoll paternal ancestor several generations ago.

The average age of Irish surnames is about 1000 years, and similar to the date of the traditional founder Eidersceoil supposedly born about 910 CE, but the age of the A13665 subclade may be more since two previous testers are A13664-, so possibly a group of already related men took up the same surname. Others may just have made a different choice. However, over a thousand years is plenty of time for non-patrilineal events (i.e., events which cause a break in the link between an hereditary surname and the Y-chromosome resulting in a son using a different surname from that of his biological father) of many kinds, either into or out of the surname, perhaps both in one line. For example, there are some Driscolls in A11115 who are related only pre A13665 so probably acquired the name secondhand.

I/Sheila have requested Tim's BAM file from FTDNA. They are backlogged and this might take months. After I receive the BAM file, the next step step is to get the results validated at YFull.com. YFull analysis also sorts out the good SNPs from the dodgy ones and may find some more. For example if Tim is positive for A13664, he should be positive for Y31631, but FTDNA hasn’t detected this. Tim's kit will appear anonymously on the YFull tree under I-A13664*. See here: YFull Tree for Tim O'Driscoll. 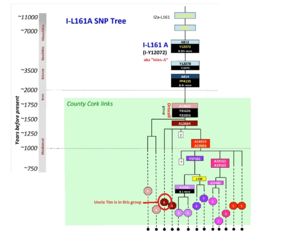