[send private message]
This page has been accessed 672 times.

John and Pat are McCarthys… and McCarthys of R-L21 Group B3b (Munster branch).

John and Pat are ZS4606+, which puts them with only about 30% of McCarthys who are paternal descendants of the eponymous Cárthach (d. 1045) (i.e., about 70% of those with the surname McCarthy do NOT descend from Cárthach).

Supposition based on phylogeny: "A great-grandson of Cárthach named Donal Mór na-Curra MAC CÁRTHAIGH (d. 1205) had two sons"... ZS4598 and A5813. Pat’s results and John’s results are ZS4598+, and John’s separate SNP test result is A5813- (the two “sons” are mutually exclusive, so this negative result supports the two positives).

Our current R-L21 Group B tree identifies several lines for which SNP ZS4598 is positive but ZZ50 is negative. On the basis of the above, these are seen as likely representing the progeny of sons of Donal Gott other than Donal Maol, and / or of brothers of Donal Maol, not all of whom may appear in historical records. If the relatively rare 15 to 14 mutation at DYS 485 truly occurred just the once, as conjectured in the current tree, this branch could well be that of Clann Tadhg Ilen (aka Tadhg Dall) since this line was reported as having a numerous posterity.

Therefore, our paternal line are (2nd or more likely 3rd) 'cousins' of MacCarthy Reagh, branching off the stem a few generations before the first MacCarthy Reagh. We share Donal Gott MacCarthy as a paternal ancestor. The present best guess is that we descend from Tadhg Dall (blind Timothy) aka Tadhg Ilen, suggesting the homeland in the 14th century was around Skibbereen (see Figure 2 excerpt attached Image #2).

Pat’s results show he is ZZ50- (here a negative result is as important as a positive one).

Two other testers (one being George McCarthy) are close matches to Pat with two shared STR mutations (in the past 800 years or so, that is). These are the very rare 16 to 17 at DYF 395Sa1b *plus* a quite rare 15 to 14 at DYS 485. Thus, we can assume that we share ancestry up to approx the 14th century. Our branches are now adjacent in the tree (see image #1) awaiting a possible amalgamation into a single branch in the future!

NOTE: In view of the number of STR mutations that we do NOT share, our shared ancestry will not be as recent as paper records can trace. However, despite the constant upheavals in County Cork over the centuries, it is claimed that some families farmed the same patch for many centuries.

Pat's Big-Y results show five SNPs not seen in any other kit on the Group B / Z16526 tree:

The CDYa/b are the fastest mutating of all 111 STR sites on the y-chromosome, i.e changes are seen more often here than anywhere else (but still only about once in 30 generations on average).

DYS 712 comes next in frequency of occurrence of changes.

John and Patrick McCarthy also participated in the extension of STR testing from 111 to 125 markers with the new markers offered by YSeq:

Per Nigel McCarthy: Please realise we are at an early stage with use of this data, but, with nearly all the data from the first clutch of orders now in, I have indicated in the attached file (see Image 2: "Y111 to Y125 markers results") what looks likely to be the scoring for your common ancestor, Dónal Mór na Curra Mac Cárthaigh, died ca. 1206. (See Fig. 2 and / or the R-L21 Group B tree on our Wordpress website.). My only real doubt is whether DYS 518 might not be 42 instead of 41.

Results: John and Patrick McCarthy are, for now, the sole ZZ50- (i.e. ZZ50 negative) representatives in Group B3 (Donal Gott Mac Cárthaigh's progeny). The 17 at DYS 614 is clearly a mutation from 18 in the past 700 years or so, so adds to the SNPs and other STR mutations we have already identified as pertinent to this period for the subgroup in which John appears to belong. The 43 at DYS 518 looks like a mutation from 41 (or maybe 42), and may also be relevant. It cannot be considered as a match with kit 338137 as they are on different branches of the tree, as determined irrefutably by SNP testing. (It should also be noted that the scoring of this locus DYS 518 is not simple, as it summates various components).

Seven other McCarthys on our Group B / Z16526 tree have a clear (100%) T (= no mutation) reading, with plenty of reads in the test. Patrick and George's two kits show a mix of Cs and Ts being read at this location according to the .vcf file. Patrick's BAM file (the computerised interpretation of Patricks's test) indicates 67 C and 271 T reads. So here we would say that, despite the reservations, there is a "phylogenetic consistency" in bracketing the two kits. If it is a shared y-chromosome SNP, it will have occurred six or seven centuries ago: we know this from Patrick's, John's and George's Y-DNA111 tests. If it were this old and occurring on another chromosome, it would be most unlikely to be identified in autosomal testing. However the sequence around this position is similar to that found on several other chromosomes, so the computer may be misaligning it, i.e the "C" reads may really be of a mutation the samples both have on another chromosome. If it is George and Patrick, rather than George and Sheila, who are showing up as autosomal matches, it may be we are actually seeing something at one of these other chromosomes which corresponds to the autosomal match, and not something at / around y chromosome position 13511245 at all.

SNPs, when identification is clear-cut, are irrefutable and invaluable; but identifying them is not always an exact science.

I have also checked position 2888691 in Patrick's BAM file and there is no mutation there, so that is not a match with George.

Florence (as a peculiar anglicisation of Finghín - pronounced Fin(y)een), is a very common name among McCarthys. No less peculiar is Cormac being anglicised as Charles. Eugene comes from Eoghan so at least there is some spelling similarity even if pronunciation became more akin to the variants Owen or Eoin. All the ancient annals and histories claim that the MacCarthys were, by the 12th century, the principal family descending from the Eóghanachta, named for Eoghan Mór (Eoghan the great). But if so they would be in McCarthy R-L21 Group A. We have shown that this is not valid. The annals and histories are validated back to Ceallachán of Cashel (d. 954), but at sometime earlier than this, this paternal lineage did NOT come from the line claimed in the histories. 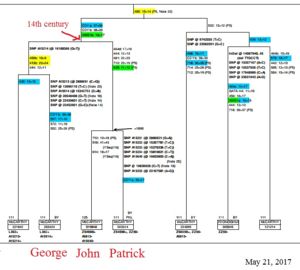