[send private message]
This page has been accessed 56 times.

The Papakura-Karaka war memorial was unveiled by Governor-General Viscount Jellicoe on 5 June 1921. The memorial was located on a triangular plot of land on the Great South Road at the southern end of the town that had formerly been occupied by the Town Board offices. The memorial column, made of Oamaru stone, had 33 names inscribed and was surmounted by a carving of a soldier in full battledress. A carved figure of a crouched lion was added at the base of the column on 8 July 1921.

The memorial is considered, because of the soldier and the lion, to be quite unusual, and the Papakura Cenotaph is regarded as one of the country's "notable" war memorials.

The carver of the soldier was T S McFarland, who is believed to have lived locally, but not much is known about him apart from his work being under the direction of William Henry Feldon, who carved the lion. Feldon's work is well known, with him coming to New Zealand in 1910, serving in the war, and designing the war memorials in Bombay, Pokeno and Rotorua.

Feldon was called upon to work on the memorial in 1932 when the local community became concerned about degeneration.

After the Second World War the memorial site was redeveloped, with notable Auckland architect Lewis Walker commissioned to complete, and a Second World War roll of honour was unveiled on Anzac Day 1955. Changes made included the incorporation of additional memorial tablets, concrete walls and a major development of the garden.

In 1993 a plaque was added to commemorate service in Korea, Malaya, Borneo and Vietnam.

The face of the monument base has the following inscription: "This monument was erected as a thankoffering to Almighty God for peace and victory and in memory of the men of this district who fell in the Great War 1914-1919. 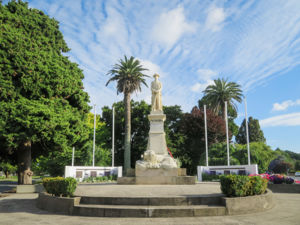 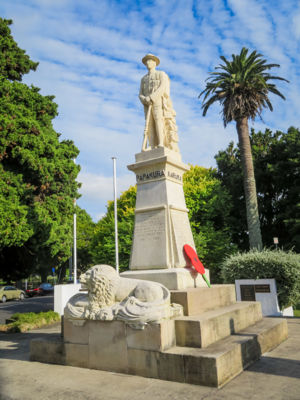 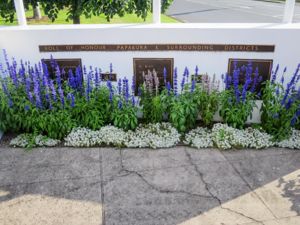