[send private message]
This page has been accessed 724 times.

Patmer Manor also Patmore Hall is recorded in the Domesday Book.
It was held by the Bishop of London and in the time of Henry III (1207-1272) was held by Sir John Baard.
It then passed eventually to John Harlestone who married Catherine the daughter and heir of Thomas Barley of Albury Hall.
John Harlestone had a daughter Anne, the rightful heir.
Thomas Scroggs, became the new lord of the Manor when he married Anne Harlestone.
Francis Scroggs (d1585) the son of Thomas married Jane Newport. This was in the reign of Queen Mary. (1553-1558)
John Scroggs (d c1593) was their son who married Mary Burton daughter of Edmund Burton of Derby.
Edward Scroggs was John’s son(d1622) who married Penelope daughter of John Smith of Bardfield in Essex [Note that the record is misleading, suggesting that Penelope was married to his son, John. The will of Edward makes the relationship clear. See below.
John Scroggs (d1692), Edwards son married Elizabeth daughter and Coheir of Thomas Bancroft of London. They had Margaret (Married Nicholas Cuntliffe) before Elizabeth died he then married Elizabeth one of The daughters of Sir William Litton of Knebworth place
From the second marriage came John, Rowland, Elizabeth, Judith and Jane John was Lord at the time the referenced book was published in 1700[1]

The Last Will and Testament of some of its inhabitants [2]
Francis Scroggs (d1585)
Francis Scrooges of Patmar hall in the parish of Aldebury, Herts, gentleman, 3 June 1585, proved 4 November 1585. To my wife Dionise (certain grain &c) and my whole team of horses being in number five, mostly in the keeping of John Anthony my servant and esteemed at the value of sixteen pounds (and other property). To my son Henry one hundred pounds, to my son Thomas twenty pounds, to my son William forty pounds, all within two years next after my desease. To my son Francis one hundred pounds, to be paid him at his full age of two and twenty years. To my daughter Susan twenty pounds within one quarter of a year next after my decease. To my daughters Grace and Lettece Scrogges one hundred pounds apiece at one and twenty or days of marriage. I give to my son John Scrogges all that my manor called Patmar hall and all my other lands &c to hold for three years after my decease upon condition that he shall stand bound unto Thomas Meade of Bardene, Essex, yeoman, and unto William Deane my son in law in the sum of five hundred pounds to pay the legacies I have given to his brothers and sisters, and then he shall hold the manor and lands absolutely and without condition. Provision made if he refuses &c. Henry the second son, Thomas the third son, then William, then Francis the fifth son, then the daughters, Alice, Elizabeth, Susan, Jane, Grace and Lettece. To my sister Katherine Surrye forty shillings and to Raff Surrye her son four pounds. Dionise my wife shall have her abode and dwelling in the three chambers next the kitchen in the said manor house, that is to say, over the larder there. Certain tenements &c. at Watton at Stone, Great Munden and Little Munden made over to the use of said wife, she to release to my son John all her right of dower in my manor, &c. Son John to be executor.

Sir Thomas Stanley
[Note may not have lived in Patmer Manor but had close relatives there]
Sir Thomas Stanley, knight, 26 February 1605, proved 13 May 1607. To be buried in the parish church of Albury, near my pew door, in the county of Hertford. The poor of that parish. I do give and bequeath all my lands in Sussex or elsewhere, as also my house without Temple Bar near London, to my brother Richard Stanley and his heirs forever, paying out of the said lands and house to my wife one hundred marks yearly during her life. To Dyonis Simms, my wife's kinswoman, foiity pounds, within forty days after her marriage. To my wife's son Edward Scroogs, a black cloak and one to his uncle Henry Scroogs. To my cousin Joane, wife of Richard Scarlett of London, a gown of cloth. To my cousin Jone Gambell of London a gown of cloth. My servants. Six poor men that shall carry me to the church. My wife Mary to be full executrix. One little table of "currall" that standeth at Lee House in Sussex, which is my wife's mother's, Mistress Burton, my will and mind is that the same table shall be delivered to her again. To my cousin Edward Stanley in the Co. of Cumberland a gray gelding called Roger.

Edward Scroggs (d1622)
Edward Scrogges of Aldbury, Herts., Esq. 2 April 1622, proved 9 October 1622. My body to be buried amongst my ancestors in Aldbury church. I do will and appoint that my loving wife Penelope (if it please God of his goodness and mercy to restore her to her health and perfect senses again and that she shall and do live and continue unmarried in my house called Patmer Hall, of perfect sense and understanding fit and able to govern, maintain and bring up my children in learning and virtue) for and towards the maintenance and the bringing up of my said children shall have the use and occupation of all my movable goods &c. within my house of Patmer Hall and so much of my lands, tenements and rents (except Patmer Hall woods and Shaw woods) as are now in my hands and possession by lease or otherwise till John Scrogges, mine eldest son, shall accomplish his full age of one and twenty years or be married. My two younger sons Edward and Francis Scrogges. To my daughters Penelope Scrogges, Smythie Scrogges, Emlyn Scrogges, Susan Scrogges and Ann Scrogges two hundred pounds apiece. Reference to jointures settled on mother, Dame Mary Stanley, and wife Penelope Scrogges. Provisions for descent of property. The residue to John Smythe Esq. my flither in law and my loving mother his wife, Dame Mary Stanley, whom I do make, ordain and constitute my executors &c.

Ann Scroggs (1618-1641 Anne Scroggs of Earles Colne, Essex, maiden, 28 August 1641, proved 18 September 1641. I the daughter of Edward Scroggs late of Aldbury, Herts., Esq. To my brother John Scroggs Esq. fifty pounds, he to pay unto my brother William Harlakenden, executor, my whole portion of six hundred pounds, together with all the interest thereof due unto me upon accompt to the day of my death. My sister Goad's legacy shall be paid by my executor and my brother Pxlward's legacy likewise, viz', one hundred pounds to my sister Goad and to my brother Edward Scroggs lilty pounds. Small bequests to Sister Scroggs, to nieces Margaret Scroggs and Susanna Goade, to Christopher Purple my nephew and Mary Purple my niece and old Mr. Purple their grandfather and to his wife, to Richard Harlakenden of Colne Prior Esq. and his wife, and to Jane Clench and to my aunt Hawkesbee, widow, and her daughter Ludgater. And to my cousin Sara Simmes (who is now in New England) five pounds. To Mr. Daniel Rogers of Wethersfield five pounds. To Mr. Till, preacher of the Word, twenty shillings and to my brother Sutton twenty shillings. To Mr. Josselin minister of Earles Colne forty shillings and to my cousin Dracott five pounds. Jacob Garret of Colne Wake, Avery Saunders of Earles Colne and John Viall of Wethersfield. To Samuel Burton my godson forty shillings and to Mrs. Cosen of Earles Colne twenty shillings. To my sister Smith the wife of William Harlakenden the full sum of three hundred pounds and all such money and other goods as are now in her custody and keeping. And if any of those parties to whom any legacies are formerly given do depart this life before they be due and payable then the said legacies shall remain and be due to my sister Smith Harlakenden ; and I make and ordain Mr. Stephen Marshall, preacher of God's word at Finchingfield, and my brother in law Mr. William Harlakenden of Earles Colne, gentleman, executois &c. 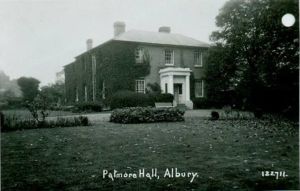