[send private message]
This page has been accessed 14,723 times.

This Name is also registered with the Guild of One Name Studies.

As a One Name Study, this project is not limited to persons who are related biologically. Individual team studies can be used to branch out the research into specific methods and areas of interest, such as geographically (England Pepperrell's), by time period (18th Century Pepperrell's), or by topic (Pepperrell DNA, Pepperrell Occupations, Pepperrell Statistics). These studies may also include a number of family branches which have no immediate link with each other. Some researchers may even be motivated to go beyond the profile identification and research stage to compile fully sourced, single-family histories of some of the families they discover through this name study project.

William Peverel was a natural son of William the Conqueror, who entered England at the Conquest. 'In Domesday it is continually spelt Piperellus. Mr. Planche: (Journal of Arch. Assoc. viii. 196) conjectures that it had a personal signification, and that 'it is a corruption of Puerulus, which is almost identical with Peuerellus, as we find it written in the Anglo-Norman Pipe and Plea Rolls' (v. Lower's Patr. Brit). This would make the meaning to be Littleboy. It does not seem satisfactory. In any case Pepperall, Pepperell, and Pepperill are variants of Peverall. - A Dictionary of English and Welsh Surnames, written: 1872-1896 by Charles Wareing Endell Bardsley.

Distribution of the name

The Pepperrell surname, including the possible variants found by the British 19th Century Surname Atlas (version 1.20 © Archer Software, 2003-2015), appears to be spread throughout England, predominately in Devon, Somerset, Wiltshire, Surrey and Middlesex, with the odd outposts in Wales, Jersey and Guernsey (see 1881 Distribution by County image on this page).

Note: Not currently one of the surname tags for this project but included here for completeness:

Notable occurrences of the name

Sir William Pepperrell, 1st Baronet (27 June 1696 – 6 July 1759) was an American merchant and soldier in Colonial Massachusetts. He is widely remembered for organizing, financing, and leading the 1745 expedition that captured the French garrison at Fortress Louisbourg during King George's War. During his day Pepperrell was called "the hero of Louisburg". He is the great-great-great grandfather of actor Robert Hardy. Wikipedia

To join the Pepperrell Name Study, first start out by browsing our current teams and research pages to see if there is a specific study ongoing that fits your interests. If so, feel free to add your name to the Membership list below, post an introduction comment on the specific team/research page, and then dive right in!

If a team or research page does not yet exist for your particular area of interest, please contact the Name Study Coordinator: Phillip Pepperrell for assistance.

We are braver and wiser because they existed,
those strong women and strong men.
We are who we are because they were who they were.
It’s wise to know where you come from, who called your name.
Maya Angelou

In all of us there is a hunger, marrow deep, to know our heritage - to know who we are and where we came from. Without this enriching knowledge, there is a hollow yearning. No matter what our attainments in life, there is still a vacuum, an emptiness, and the most disquieting loneliness.
Alex Haley, Roots

Why They Came To London

I recently received the last copy of the book Why They Came To London by Michael Barefoot from his son. The book is A study of five selected ancestors who came to London early in the 19th Century; eventually to be related, or their descendants to be related, by marriage. They had the surnames of BAREFOOT, MOSS, JAMES, McINTOSH & PEPPERELL.

In Chapter 7 - A Tale of Many Parishes the story is told of the Pepperells of Slapton and Stokenham, detailing the direct line to the author, and their migration from rural Devon to London. The chapter contains a rhyme about the spelling of the Pepperrell surname. I am not sure where it originated or who the original author was; Michael Barefoot refers to it as "an ancient little ditty!" but does not mention it's origins. Seems like the ancient scribes and clerics had the same problem spelling the Pepperrell surname as people do today.

THE PEPPERRELLS
Would writers learn to rightly spell
The Ancient name of Pepperrell
Then please these easy lines recite
And one will surely have it right
Of letters four make ten from these
of p's and r's and l's and e's
Begin with p and e and then
Use all the letters that you can
That is to say in Pepperrell
Use doubles p and r and l.
Unknown


Images: 2
Why They Came To London 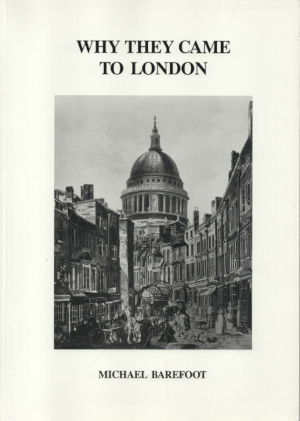 1881 Surname Distribution by County for Pepperrell and variants. 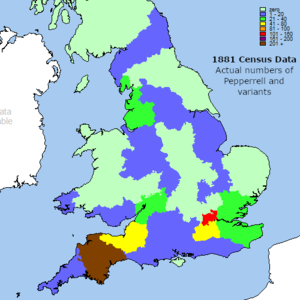