[send private message]
This page has been accessed 1,254 times.

It isn't definite how Pleasantville was named, but tradition holds that the first pioneers who came to the area referred to it in their letters back home as a pleasant place, a beautiful prairie with small groves throughout. That explains the township of Pleasant Grove, and we assume in the planning of the incorporated town of Pleasantville, the township name was influential.[1] The area the actual town of Pleasantville was settled and now stands was once part of a disputed claim between William S. Glenn and a Mr. Gillman and sons.[1] A law suit ensued, the Gillmans hiring Matthew Spurlock of Wapello County to represent them. Part of Spurlock's compensation was to be some of the Gillman claim.[1] The Gillmans won the case, but refused to give Spurlock what he thought he deserved for his services.[1] The Gillmans realized it wouldn't end well trying to fight him, so they met with him in Wapello County and sold him the entire claim, plus a horse, for $30.[1] But, as fate would have it, since the Gillmans had abandoned the claim by legal standards, the Glenns jumped it. He secured a title and kept possession of the piece until it was sold to William F. Jordan, whose sons Miles and Wesley decided to build a town there.[1] The land was surveyed August 1, 1849 by Stanford Doud, the Marion County land surveryor.[1]

Wesley Jordan's house was the first erected in town. It was later owned by L. McClellan.[2] The Jordans opened the first trading post in town, as well as the first post office. Prior to that, pioneers received their mail from Red Rock and Pinchy (Parin City Landing).[1] The mail came by boat up the Des Moines River.[1] Merchandise sold by the Jordans, and later by the Spaltis, came by river, as well.[1] It was then hauled by to Pleasantville by a wagon and team.[1] The last time this happened was in 1865 when Congress deemed the river non-navigable.[1]

In 1847, the first elections in the township were held on the claim of William Glenn.[1] The votes were counted by grease lamp, which was accidentally knocked over by one of the clerks, which ruined the paper containing the outcome of the election.[1] No notes exist that explain what the group did following the accident to remedy not knowing who had won.[1]

Miles Jordan taught the winter term of school in town in the first winter, 1847/8 with 25 students, and was paid $2 per student for his services.[1] The first schoolhouse was a log building, with puncheon floors and seats, as well as windows covered with greased paper to let in light.[1] Miles also served as the justice of the peace, performing the first marriage ceremony in town. He also represented Marion County in the General Assembly of the State Legislature.[1]

The first church in the town was built in 1852 by the Congregationalists.[1] The first service held there had 12 people in attendance.[1] The building was later taken over by the Methodists.[1]

The first Marion County Fairgrounds was in the northern part of Pleasantville, on the ground later called the Phillips Addition.[1]

Images and history relating to the town of Pleasantville, Iowa in Marion County. Most of this information and the images are courtesy of the research of Abby Glann for the Webb Shadle Memorial Archives. 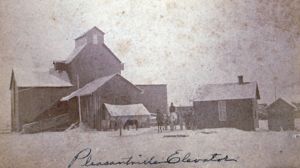 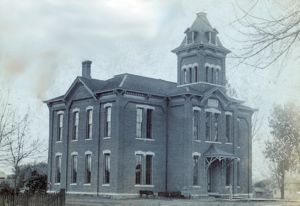 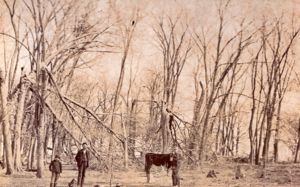 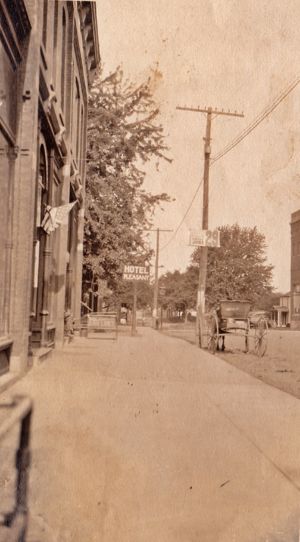 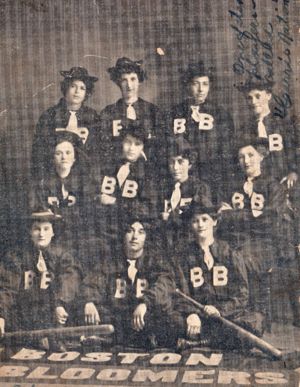