Myths and Misunderstandings of the Quackenbush Family

[send private message]
This page has been accessed 4,562 times.

The discovery of the alias Bont 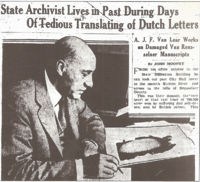 The name Quackenbosch first appeared in New Netherlands in 1657, three years after Pieter first appears in the records of Albany. In every record prior to that, Pieter only used the last name of Bont. Arnold John Ferdinand (A.J.F.) Van Laer (1869-1955) was a translator of the documents of Beverwijck (Albany), among other things.

Arnold Johan Ferdinand Van Laer (most often cited as "A. J. F. Van Laer") was one of the great antiquarian contributors to the early history of Albany. Primarily a translator and editor of Dutch-language documents from New Netherland and seventeenth century Albany, this librarian and archivist also produced a number of valuable historical narratives.

Van Laer is said to have been born in Utrecht in 1869. Trained as an engineer and as an archivist, he graduated from the University of Delft, He settled in Albany in 1897 and lived there until his death. He graduated from the New York State Library School with a degree in library science. [1]

While working with these historical documents, A.J.F. started to suspect that Pieter Quackenbosch and Pieter Bont, both brickmakers in Beverwijck (Albany), were the same person. He finally found proof of this in a document relating to the transfer of property, dated Jan 1687.

Van Laer seems to not have made the connection yet in 1920, as Pieter Bont and Pieter Quackenbosch are separate entries and not cross-referenced in Minutes of the court of Fort Orange and Beverwyck, 1657-1660, Vol. II, though both are suing Pieter Jacobsen Bosboom. He has finally connected the two in the index of Minutes of the Court of Albany, Rensselaerswyck and Schenactady, 1668-1685, Vol. 1 published in 1926.

Early family historians were also likely unaware of the alias and this does bring into question the research of Adriana Suydam Quackenbush on the origins of the family as well as the family crest. Furthermore, the Pieter van Quackenbosch that Adriana found in Holland was born in 1639 and just a 12 year old student at Leiden University in 1651; from there he went on to study theology at Groningen. A Petrus Quackenbosch does appear in 1658 publishing theological books in Latin.

Our progenitor first appears in Beverwijck records in 1654, when his hand is cut by Jan Gouw.

Pieter has a wife and children with him when he arrives because Reynier's marriage record shows that he was born in Holland. To have completed major schooling, started a new family and to have brought them across the Atlantic by 15 seems quite impossible. Therefore, the two Pieters cannot be the same person.

That aliases were used by the Dutch settlers isn't surprising in the least and even early researcher Pearson discusses how embarrassing it is to try and connect these people with their aliases. [2] There were other Bonts in Beverwijck (Albany), which may have led to the use of Quackenbosch.

The History of Rensselaer Co., New York is a book contains a brief profile and pair of sketches of a Peter Quackenbush and a Mrs. Peter Quackenbush. Since the page begins with information about Pieter, the progenitor of the American branch of the Quackenbush family, the sketches above the entry have been mistakenly assumed to be of Pieter Quackenbosch and Maritje Ariens and the images have spread like wildfire on Ancestry.com. Looking at the book it is easy to see how this happened as the book is poorly worded, though the author does use the name Pieter for the progenitor and Peter for the man pictured. 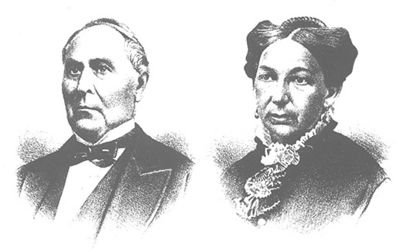 It is important to remember that Pieter, the progenitor, existed in the 17th century. This painting is The Fall of New Amsterdam by Jean Leon Gerome Ferris and it depicts the mid 17th century Dutch in New Amsterdam begging Peter Stuyvesant to not attack the English, who are about to change the name of New Amsterdam to New York. Please note the differences in the style of clothing from the above sketches. 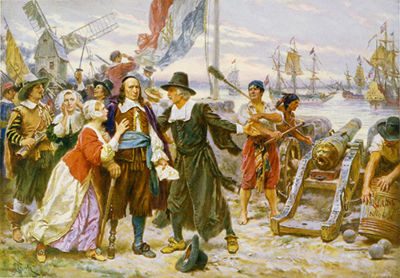 Painting of a Quackenbush House

This painting is not of Pieter Quackenbosch's house, which was destroyed by 1698, nor is it a painting of the 18th century Quackenbush house in Albany. This is a painting of Nicholas Quackenbush's house that was part of a collection of Nicholas' things that were sold at an auction. 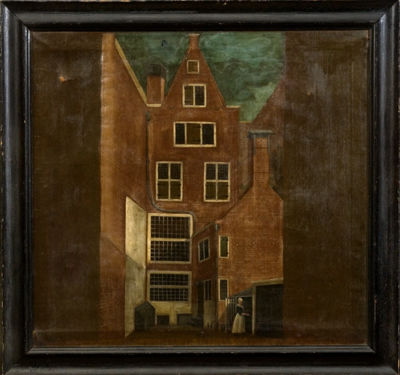 Very Unusual Painting of the Back of the Quackenbush Home,
2006, Spring Decorative Arts, June 17
oil on canvas, inscribed near center NQB Sep 24 1811 with additional, unreadable writing. An odd painting that depicts the alley behind the Quackenbush home in Albany, New York. Pictured is a cat drinking a bowl of milk and one of the servants who appears to be carrying dirty dishes to the exterior kitchen. In what appears to be its original, black-painted frame; 28" x 29.5" (w/o frame), 34.25" x 35.5" (w/frame).
Painted just two years before his death, it is unclear why Quackenbush had his back alley portrayed on canvas. [3]

One confusing thing about early Dutch records is a Jr. after a name did not always denote that the person was the son of a father with the same name. It was used to differentiate between an elder that may even share a patronymic as a younger person but wasn't necessarily a direct descendent. The Dutch word for younger is jongere.

The witnesses at baptisms were not always grandparents. The witnesses were closer to godparents that would take care of the child should anything happen to the parents. Occasionally the child would be given the name of the godparents but not always. The trend in baptism records does appear to be that the grandparents typically witnessed the birth of the first grandchild. Sometimes the other set of grandparents would witness the baptism of the second child. If the parents had passed away, aunts, uncles and even siblings would stand as witnesses.

Occasionally parents used a traditional naming convention for their children where the first son was named after the paternal grandfather and the first daughter was named for the maternal grandmother but this wasn't always followed.

Variations of the spelling of Quackenbush

The occasional usage of the use of the Dutch form of Kw in place of the Latin form of Qu in old Dutch records appears to depend on the person that is doing the recording. For example, when Domine Du Bois begins performing baptisms the name changes from the previously recorded Quakkenbosch to Kwakkenbos. [4] This is likely the same explanation for other variations of the name, whether it be the doing of the original transcriber of the record or the translator at a later date.

Upon examination of the marriage records of Pieter and Maritje, one can see that in Dutch writing the name ended with a squiggle that almost looks like an f and a g. The f character appears to have been translated as a double s by many due to the use of the character in early print to represent a double s. The squiggle definitely lends itself to interpretation.

While certain branches of the family appear to have used a specific spelling, it is more likely due to the fact that their direct ancestors were all baptized or married at the same Reformed Dutch Church, with a single person recording their records for the church. 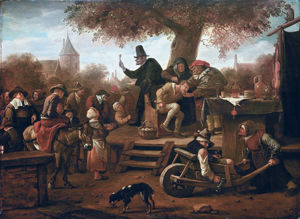 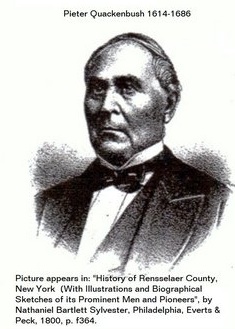 Back alley of the Nicholas Quackenbush House 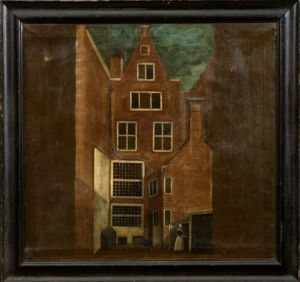