Reminiscences Growing up in Westfi

[send private message]
This page has been accessed 15 times.

Growing up in Westfir

I was one of the lucky ones. I was born in Westfir and grew up there during the best of its years.

I remember the company-owned store and the crunch of calk boots as they bit into the wooden sidewalks. I remember the tiny post office with its two windows and rows and rows of mailboxes. I remember the covered “breeze way” of the six-room grade school where we roller skated and played hop-scotch when we were in the lower grades and the baseball field out back where you were “somebody” if you could hit the ball onto or over the roof of the bus barn at the back edge of the outfield.

I grew up in company housing in the Hemlock neighborhood and later in a house further down the road that my parents purchased when Hines built and sold houses there in the late 50s. My mother still lives in that same house now several years after my father’s passing. He worked for Westfir Lumber Company and later Edward Hines from the mid 30’s until he retired late in the 1960s. They had come to Westfir from Silverton at a friend’s invitation shortly after they were married. For a while they lived in Camp 3 on the flats above the river near the top of “The Incline” and then later up the river at Camp 5. There were other camps: Camp 2, Camp 4, and Camp 6. They were temporary camps for the loggers and their families when they were working in the surrounding areas. Camp 6, up on High Prairie, is the only one remaining now still inhabited. I remember the bunkhouse building for the single loggers and mill workers. My brothers delivered newspapers there. I remember the cook house where employees could get their meals. I remember when there were two covered bridges in town and not just one. We walked across the lower one from Hemlock to catch the bus to school in the morning.

I loved the simple, local place names. If you lived in Hemlock and wanted to go to the company store, or school or office, you simply went “uptown.” If you went the back way to Oakridge, you went “over the hill.” Now the drive up the North Fork is Aufderheide Drive. Then it was just “up the river.” Everyone knew what you meant.

I started and finished high school at Westfir High School during the 12 Cinderella years of its short life.

It was truly a working man’s Camelot. There were no class differences. There were no racial or ethnic divisions. People were neighbors and friends. We visited one another in the evenings. We left our homes to their care when we went on vacations. We hunted the mountains in the autumn and swam the river in front of the house in the summer. We hiked into lakes that now have roads into them, and in the winter we went to school.

I didn’t know at the time how special and how beautiful a place it was. I thought everyone grew up like I did. To me it was just normal. It wasn’t until years later after I went off to university and out into the larger world that I began to realize that it was not the norm, that it was truly a special place and a special time.

Everyone should have the good fortune to grow up in a “Westfir”.

I was one of the lucky ones. 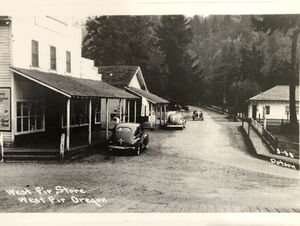 Westfir, Oregon in the Winter 1950s 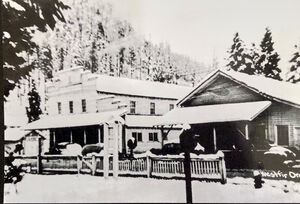