[send private message]
This page has been accessed 140 times.

What has been done

This is a list of what research has been done to date, which sources have been checked, and what leads have been examined.

Families they may have traveled with

Thought occurred to me that the family may have historically traveled with others. I think if this is the case, it will be my best bet for tracing them back before Burlington.

What can still be done

I had Vermont Archives send me a copy of William's petition (Vol 19, File 25). But when I read the transcribed petition in State Papers of Vermont - Volume Ten - General Petitions 1793-1796, it seemed to indicate more than what was listed on the petition.

Excerpt from that book:

A. I. 1793: *read and referred to a committee, 7o——*Its report read, not accepted, 88; *vote of non—acceptance reconsidered and petition recommitted to same committee, to report the particulars of the facts, 88; their report, giving a detailed account of the petitioner’s financial difficulties, read and accepted, 126—7;a bill read and ordered to lie, x31; bill read, accepted, and sent to Council, 149; passed into law with amendment, 10/30/93, (57.1 G. ¢'? C., IV; act read and concurred with amendment, 55.

These are a list of sources that may contain records but haven't yet been checked.

Discover where to look

When we did the research in Upper Canada we were lucky because the genealogist knew all of the sources as she had personally indexed them for her books. One of the main problems with Vermont / New York is that we are missing that expertise. There may be diaries and other non-conventional records out there - but we can't check them if we don't know that they exist. 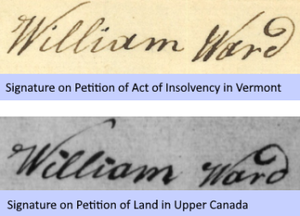