[send private message]
This page has been accessed 1,321 times.

The Roosevelt Corollary is a corollary to the Monroe Doctrine that was articulated by President Theodore Roosevelt in his State of the Union Address in 1904. The corollary states that the United States will intervene in conflicts between European Nations and Latin American countries to enforce legitimate claims of the European powers, rather than having the Europeans press their claims directly.

In late 1902, Britain, Germany, and Italy implemented a naval blockade of several months against Venezuela because of President Cipriano Castro's refusal to pay foreign debts and damages suffered by European citizens in a recent Venezuelan civil war. The incident was called the Venezuela Crisis of 1902–1903, and led to the development of the Roosevelt Corollary.[1] An international court concluded on 22 February 1904 that the blockading powers involved in the Venezuela Crisis were entitled to preferential treatment in the payment of their claims. The U.S. disagreed with the decision in principle, and feared it would encourage future European intervention to gain such advantage. In order to preclude European intervention, the Roosevelt Corollary asserted a right of the United States to intervene in order to "stabilize" the economic affairs of small states in the Caribbean and Central America if they were unable to pay their international debts.

The Roosevelt Corollary at Wikipedia 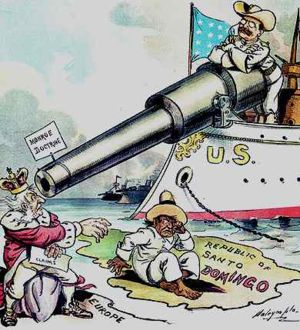