[send private message]
This page has been accessed 1,400 times.

She was the most famous privateer from Nova Scotia in the Napoleonic Wars. Under Alex Godfrey she fought two remarkable battles against strong odds. In one case, Rover single handedly attacked a French convoy of seven ships dispersing them and capturing three. In another, she beat three Spanish warships in a gunnery duel and boarding off the coast of Venezuela. These battles won praise in Britain from the distinquished magazine The Naval Chronicle and Godfrey was offered a Royal Navy commission, which he declined. Later cruises proved less rewarding. A subsequent captain, Benjamin Collins lost his commission and landed Rover's owners in trouble for several illegal captures. After French shipping vanished and prizes disappeared, she was converted to an armed merchant ship under Halifax owners.[1]

Rover was a privateer brig out of Liverpool, Nova Scotia known for several bold battles in the Napoleonic Wars.

She was built in Brooklyn, Nova Scotia (then known as Herring Cove) over the winter of 1799-1800. Rover was owned by a group of merchants from Liverpool, Nova Scotia led by Simeon Perkins and Snow Parker. Rover's captain was Alexander Godfrey, and she sailed under a letter of marque. Her crew were mainly fishermen.

After 1804, she was sold to Halifax owners who employed her as a merchant vessel. She later capsized and sank in the West Indies.[3]

"Up wi' The Red Jack! Down Helm!"[4]
"Drifting Down, Stern Foremost, Upon the Spaniard"[5]
Letter of Marque, Rover[6]
The Ballad of the Rover a song by Archibald MacMechan celebrating her famous victory.[7] 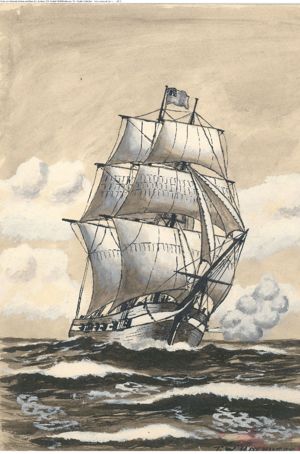 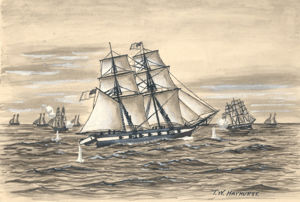 "Drifting Down, Stern Foremost, Upon the Spaniard" 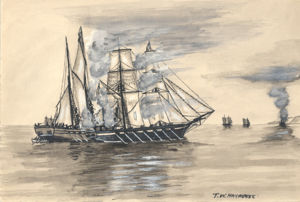