[send private message]
This page has been accessed 1,265 times.

Rudolfstadt/Rudolfov is a city in South Bohemia, about 5 km north-east of Budweis/České Budějovice.

The history of Rudolfstadt/Rudolfov is closely related to the discovery and exploitation of silver deposits in the area. The first mention of silver mining in the area is from 1385 and it reached its peak in the second half of the 16th century. Numerous mining encampments sprang up in the area near mining shafts and gradually developed into towns. Große Bergstadt and Kleine Bergstadt became one of the most important silver mining areas in all of Bohemia. In 1585 the Holy Roman Emperor Rudolf II renamed Große Bergstadt Kayser Rudolffstadt and made it a "Königliche freie Bergstadt".[1]

Rudolfstadt/Rudolfov was partially rebuilt during the remainder of the 17th century but never reached its previous importance again. A census of the parish in 1663 listed 58 houses of which 56 were inhabited with a population of 203.[3] 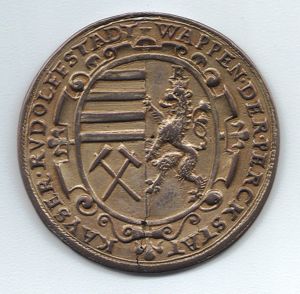