[send private message]
This page has been accessed 54 times.

SS Amerika was part of the Thingvalla Line.

Originally laid down as the Arctic but her name was changed to Celtic before she was launched in 1872. She was a 3 867 gross ton ship, 3 754 under deck and 2 439 net. Her details were: 437,2 feet long, 40,9 feet beam and holds 23,4 feet deep. (133,25m x beam 12,46m) She was an iron construction with a single screw. She had 4 masts and was rigged as a bark. 3 decks, 2 of iron and 7 bulkheads. Propulsion: compound engine with 4 inverted cylinders of 41 and 78 inches diameter each pair, stroke 60 inches, 600 horsepower. The engine was built by G. Forrester & Co. in Liverpool. She had a speed of 14 knots. She was purchased by the Danish Thingvalla Line from the White Star Line in 1893, and renamed "Amerika". She departed from Copenhagen on her first voyage for Thingvalla Line on May 27th, called at Fredrikshavn on the 28th, called at Kristiania (Oslo) on the 29th, called at Kristiansand on the 30th and arrived to New York on the 11th of June with 116 cabin and 769 steerage passengers. The company had not reckoned on her heavy coal consumption, also, the number of passengers decreased sharply, and the S/S Amerika only made eight round voyages in four years. On 7th September 1897 she started the last of the eight crossings on this service, and the following year she was scrapped at Brest. The "Morton Allan Directory" lists only four of the eight crossings. [1] 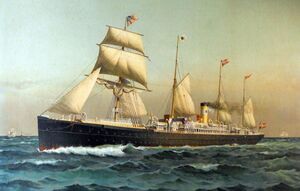 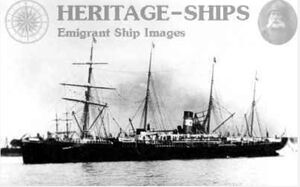 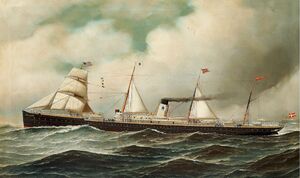 Joann Hanmer
Hej Hanne. That is amazing. I am going to add links to lists of passengers when posible, and it would be lovely to be able to start of with some Wikitree profiles. It bring the story alive, when we can add real people and read about their lives. Was it only her travelling, or did she go with her family ?

Antonie (Møller) Henriksen (1875-1956) was 17 years old and travelled alone on SS America - destination Bozeman Montana where a brother and sister were staying. A few months later a brother also joined (ship Island). One brother stayed in Montana, the other 3 returned to Denmark.