[send private message]
This page has been accessed 63 times.
Back to One Place Studies Project

This profile is part of the Salem Township, Luzerne County, Pennsylvania One Place Study.

This is a One Place Study to collect together in one place everything about Salem Twp,Luzerne Co, Pennsylvania. The hope is that other researchers like you will join the study to help make it a valuable reference point for people studying people that lived there and their contributions in history.

* Salem Twp has an interesting history,it was about the southernmost part of Pa that was claimed by Connecticut in the early days of US history. The. Connecticut legislature determined that the population was outgrowing the land area that they considered theirs so,considering they had a land grant from the King of England that said they owned everything west of them to the ocean,they set up the Susquehanna Co to explore and settle a large section of northeast Pa. The trouble was that the Penns also had a land grant,from the same King,that gave the same land to 2 different bodies. Both the Yankees from Connecticut and the Pennemites from Pa were making treaties,buying land from the Indians and attempting to settle the same area,it resulted in a few skirmishes called the Yankee/Pennemite war and left the area in a turmoil for quite a few years. After the Revolutionery War the new government of the US held a council in Trenton,NJ that,for the most part,settled the differences between the two states over the overlapping land grants but the resolution of overlapping land warrants still took most of another 20 years or so to settle. The Treaty of Trenton determined that the Connecticut land owners could stay on the property that they were on,formed the county of Luzerne,which is a large part of the area that the Yankees had claimed and determined that the land would be governed by and be in the jurisdiction of the state of Pennsylvania.

Is one of the eleven townships in which Luzerne county was divided at its formation—named after Salem, Conn. The following, being the oldest authentic account of the doings of the people of the township, is taken from the records. The first entry is back in Windham, Conn., April 1, 1773, appointing Nathan Wales "ye 3d" and Ebenezer Gray, Jr., a committee "to repair to Susquehanna river and make a pitch for a township and survey and lay out the same. Thomas Gray was chosen clerk of this new township and the name of Salem was adopted. Wales and Gray discharged their duty and reported progress to a meeting of July 7, 1773; report adopted.

It was "voted that the 7th lot in the first division now laid out belong to Mr. Nathan Beach * * * because he now lives on the same; and said Beach is to have an equal share with other proprietors in the remainder of the land that is undivided in said town of Salem; provided the said Beach pay his equal proportion of the cost of laying out said town and other necessary charges."

Lots 51, 52 and 53 "that are laid out in the first division" were declared "the three rights that was voted by the Susquehanna company to be laid out in each town for the public use."

A meeting of the proprieters of Salem was held in Windham November 7, 1774, at which the following action was taken:

[p.643] Voted, That Messrs. Ebenezer Lathrop, Jr., and Asa Edgerton be a committee to repair to and lay out the town of Salem in lots in the following manner: viz. to lay out in the best manner on the most fertile lands 106 100-acre lots; viz. two 100- acre lots to each proprietor and to each public right, and the remaining land to divide equally to every proprietor and public right; and then to make each division equal by numbering the lot, that is by putting the good and bad to the same number, so as to do justice to each proprietor in the division of said township; and that Thomas Gray be collector.

"Voted, That for the future Samuel Gray, Jacob Lyman, Esqs., and Prince Tracy be a committee to warn meetings of this proprietary and to take care of the prudential matters of this township."

It is said that the first ballot used at an election was at a meeting at the house of James Campbell, March 2, 1816, when Alexander Jameson was elected clerk and Joseph Jameson, Sebastian Sibert and James Santee a committee to settle the business of the township for the current year and divide the township into school districts. A meeting convened at the house of Henry Hepler March 28, 1818, and confirmed the divisions made. Five districts were formed, and in 1818 the children in each district numbered as follows: first, 64; second, 82; third, 72; fourth, 75; fifth, 46; total, 344. The sixth district was formed in 1839.

Nathan Beach was the first settler on the Jona Gould farm. Beach Grove gets its name from him, where he was for a long time postmaster. He was a strong character man, a longtime justice of the peace and represented the county in the legislature. He was the leading public spirit in all enterprises, and had much to do in bringing mills, the turnpike and canals to this section. He was an old Revolutionary soldier. The Crarys, of Shickshinny, are his descendants.

John A. Harmon was born in Salem township, October 19, 1795, near Stephen Hill's farm, north of Beach Haven. From youth he lived on a farm northwest from where he was born until his death, in 1878.

David Thompson, who was present in Wilkes-Barre when Judge Fell burned coal in a grate, became the proprietor of the noted Iona farm. He was a leading citizen.

The following were the taxable inhabitants of Salem in 1796:

One mile below Beach Haven the Seyberts had a store, grist and sawmill, fulling-mill, [p.644] clover-mill, distillery and plaster-mill—Sebastian and Barney Seybert. They carried on business until the war, when they got into trouble about the whisky tax, which, in the end, broke them up and destroyed all business at that place.

Sebastian Seybert settled about 1780 near the mouth of Seybert or Varner's creek, about a mile west of Beach Haven, and built a gristmill, sawmill, clothiery and distillery. The gristmill was of logs, had one run of stones, and could grind only from four to six bushels of grain a day. The sawmill was of the old "flutter- wheel" style, and would cut about 1,000 feet of lumber in twenty-four hours. The clothiery was of the most primitive kind, and the distillery was the best that could be built at that day. They have all gone to decay except the gristmill, which is now owned by Edward Lutz.

From 1825 Uriah Seybert had a gristmill and a sawmill farther up the stream for a few years. The gristmill at Beach Haven was built in 1847 or 1848 by A. T. McClintock. The original water power proved insufficient, and subsequently steam was applied. The sawmills at the head-waters of Mill creek were built since l840, the upper mill by S. Pollock and the one farther down the stream by Daniel Hill. There are also two sawmills at the head-waters of Seybert creek. A tannery at Beach Haven was built by Albert Hinsey in or about 1847. It was owned by Andrew Seeley, but is abandoned and decayed.

There is no borough in Salem township. The township is fair for agriculture. Along the river the most of its front is quite a valley, and at points, like Beach Haven, extends back where is a second bench that reaches back in some places three miles. The most of it is capable of cultivation and is not very rocky.

Joseph Walton, blacksmith, located at Beach Grove in 1803 and carried on his trade and farmed at the same time. Many of the early settlers along the river were, no doubt, attracted there by the excellent shad fishing, and "shad-fishing grounds" were purchased at a high figure.

Beach Haven was plotted by and named for Josiah Beach, son of Nathan Beach, who came to the place in 1832 and built a gristmill, water power; afterward built a new mill run by water obtained from the canal company. He lived and died a bachelor, and at his death the most of his property went to George Beach, nephew and son of Thomas Beach. One of the first settlers in the place was Elisha Courtright, of New Jersey, in 1787, and opened the first tavern in the township. The same year came Michael Seeley. John and Samuel Seeley came soon after and located at Bellbend postoffice, formerly Beach Grove. The office was first moved to the Andrew Courtright place and then to Bellbend about 1870. Beach Haven is in a beautiful valley and is a beautiful place for a town. James Lockhart was an early settler here and was a conspicuous figure in the place from 1795 to 1830. Dr. Mason Crary settled in the place in 1795. He married a daughter of Nathan Beach and was the first resident physician. This was a noted point on the canal. The people by a little diplomacy, secured here the weigh-locks as well as the regular canal-locks just below the weigh-locks. The weigh locks are built of massive square stone, strongly ironed together, and the office and scales-house is a substantial two-story building where is an agent on duty at all times. At the lock, just below, is a drop in the water level of thirteen feet. John and Jacob Gould inherited the bulk of Nathan Beach's property. Jacob Gould is still living. Campbell's mills were just above the town; he had clover and sawmill. Patrick McGraw, father of Thomas McGraw, settled at Beach Haven in 1828, when canal building was going on rapidly and the place gave many evidences of future importance. For some years it flourished greatly, but as the days of canaling began to pass away so did the rainbow hopes for the place. Thomas McGraw, who was born in the place and is now past sixty years of age, first remembers the old hotel that stood where is now the upper hotel; that D. G. Driesbach was merchandising, his store near the creek; thinks he carried on the leading business from 1840 to 1867; then he remembers [p.647] Mrs. Anderson's store where Thomas McGraw's now stands. It was burned and they closed out in 1865 and the family went to Missouri. The building belonged to J. F. Hicks. The ground was purchased by Thomas McGraw and his present brick building erected in 1888. In the place are postoffice, railroad station, two hotels, two general stores, two groceries, brickyard, blacksmith and shoemaker and estimated population of 300. 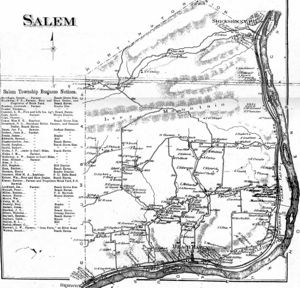 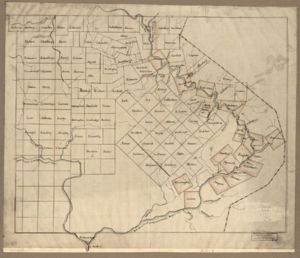