[send private message]
This page has been accessed 15,641 times.

This is a Sub-Page of the Witch Trials Project

“A great number of Americans have made the same startling discovery that Francis Dane did: They are related to...[victims of witchcraft delusion]. American presidents descend from George Jacobs, Susannah Martin, and John Procter. Nathan Hale was John Hale’s grandson. Israel ‘Don’t Fire Until You See the Whites of Their Eyes’ Putnam was the cousin of Ann Putnam. Oliver Wendell Holmes and Louisa May Alcott descended from Samuel Sewall; Clara Barton from the Townes; Walt Disney from Burroughs. (In a nice twist, the colonial printer who founded the American Antiquarian Society, where Cotton Mather’s papers reside today, was also a Burroughs descendant.) The Nurse family includes Lucille Ball...”[1]

We list here some of the victims of the Witchcraft Delusion of 1692 in Salem, Massachusetts Bay and attempt to show their various roles. This is not so easy. Many others have attempted to do this in the more than 300 years elapsed; all are unsuccessful.

A primary cause is lost records, some of them undoubtedly intentionally destroyed. There are many errors; most of them probably mistakes, but some also intentional. Other obstacles include dual or changed roles. For example, many early accusers were later accused themselves and imprisoned. Other early collaborators became vigorous protestors.

It is estimated that several thousand persons suffered during this dark time; we will never know how many. A majority of living Americans are descendants.

The list is, and, therefore, will remain incomplete. A larger alphabetical listing may be found here, Category: Salem Witch Trials.

We invite you to visit the profiles, correct the errors, improve them, and add your own discoveries.

Thank you for taking a look!

"Reverend George Burroughs...In 1690, when the Eng. frontier was forced back to Wells [Maine], there he held, doing a hero’s work until arrested for witchcraft, taken to Salem, tried and hanged…"[2]

* Giles Corey was pressed to death as a part of an interrogation; he was not executed for a crime.

"Lydia Dustin...Accused as a witch during the Salem hysteria, Lydia was found not guilty, but, died in prison before she could be released."[3]

"Procter reported that his seventeen-year-old son, William, had been tortured by being tied up 'Neck and Heels till the Blood gushed out at his Nose' and thereby forced to confess. Procter also said that the same technique had been used on two of Martha Carrier’s sons, eighteen-year-old Richard Carrier and fifteen-year-old Andrew, in order to extract confessions and accusations against their mother.”[4]

"Five year old, Dorcas Good...When led in to be examined, Ann Putnam, Mary Walcot, and Mercy Lewis, all charged her with biting, pinching, and almost choking them...The evidence was considered overwhelming; and Dorcas was, per mittimus, committed to the jail, where she joined her mother."[5]

"Legal proceedings extended from February 29, 1691/ 2...to late May 1693...encompassed legal action against at least 144 people (38 of them male),...54 confessions of witchcraft; the hangings of 14 women and 5 men; the pressing to death of another man by heavy stones; and the deaths in custody of 3 women and a man, along with several infants."[6]

The Minister that started it all

"The darkest page in the history of New England is that which bears the record of Salem witchcraft...[Pastor of Salem Church, Rev.] Parris believed or affected to believe, that the two girls were bewitched and that Tituba, an Indian maidservant of the household, was the author of the affliction...There is no doubt whatever that the whole murderous scheme originated in the personal malice of Parris...."[13]

"In February 1692, strange illnesses appeared after the girls tinkered with fortune-telling. Elizabeth [Betty Parris] acted abnormal by hiding '...under furniture, complained of fever, barked like a dog, and screamed and cried out of pain' and her body convulsed into un-human-like positions."[14]

Doctor of the “Evil Hand”

"And the whole neighborhood and surrounding country soon were filled with the story of the strange and unaccountable sufferings of the "afflicted girls." No explanation could be given, and their condition became worse and worse. The physician of the village, Dr. Griggs, was called in, a consultation had, and the opinion finally and gravely given, that the afflicted children were bewitched."[15]

"The Deposistion of Ann putnam the wife of Thomas putnam who testifieth and saith that on the first day of June 1692. the Apperishtion of Rebekah Nurs did again fall upon me and almost choak me and she tould me that now she..would kil me..."[16]

The role of witches' cakes

"Mary Sibley recommended the making of a witch's cake to reveal whether witchcraft was involved. She gave directions to John Indian, a slave serving the Parris family, to make the cake. He collected urine from the girls and then had Tituba, another slave in the household, actually bake the witch's cake and feed it to the dog that lived in the Parris household."[17][18]

"…on September 29, 1692, twenty persons had been executed and the accusations and arrests continued, including charges against…Phips' own wife. At this point Phips finally let it be known that the court of Oyer and Terminer ‘must fall’"[19]

"Chief Justice William Stoughton…he sacrificed all the better feelings of his nature, and prostituted the forms of justice to consummate a series of judicial murders that have no parallel in our history."[20]

"We do therefore hereby signify to all in general, and to the surviving sufferers in special, our deep sense of, and sorrow for, our errors in acting on such evidence to the condemning of any person; and do hereby declare, that we justly fear that we were sadly deluded and mistaken–for which we are much disquieted and distressed in our minds and do therefore humbly beg forgiveness..."[21]

Officers of the Court

"It is even told that the Sheriff [George Corwin] took his cane and pressed Giles' tongue back into his mouth just before he died at the end of the two days of being slowly crushed."[22]

"…the story resonates far beyond Salem because those accused have an estimated 100 million descendants." "In that sense, it really is our national story, our national shame and our national chance at redemption because you know if you're not a descendant of one of those people probably the person standing next to you is" --- Emerson "Tad" Baker, a professor at Salem State University[24]

"During the Salem Witch Trials, Bradstreet was Justice of the Peace for Andover. He issued warrants for the arrest and imprisonment of forty-eight suspected ‘witches’, after which he refused to issue any more. As a result, Bradstreet and his wife, Anne, were accused of witchcraft and forced to flee the area."[25]

They Dared to Oppose

"Salisbury, Aug. 9, 1692," addressed "To the worshipful Jonathan Corwin... The letter is a most able argument against the manner in which the trials were conducted, and, by conclusive logic, overthrows the whole fabric of the evidence on the strength of which the Court was convicting and taking the lives of innocent persons... The weight of evidence seems to indicate that the document is attributable to Major Robert Pike, of Salisbury.”[26][27]

"In Cases of Conscience Increase Mather forcefully related his distrust of spectral evidence to convict witches. He argued that it would be better that ten witches go free than the blood of a single innocent be shed."[28]

"After the witch trials began, Thomas Putnam and Ann Putnam, Jr, quickly became the main accusers in the trials..."[29]

The events that took place during the Salem Witchcraft Trials are odious and disgusting to most people of our current time.

Those of us who had innocent and defenseless ancestors executed, tortured, imprisoned for months in iron fetters, and put to death by prison conditions cannot find words sufficient to express our anguish and sorrow even after 320 years.

More heart-rending is the infant of executed Sarah Good, born and died in jail; or her five-year-old daughter, Dorothy, also accused, imprisoned, fettered alongside her mother until the hanging, and insane for the rest of her life.

It may be impossible for some of us, but it may be proper to countenance that nearly all participants believed themselves to be acting virtuously. 1692 was a very different time, and the relativists warn us that morality and historical truth exist only in terms of their time and place.

Perhaps, we might also remember that all participants have been forgiven in one form or another.

Lists of People in the Salem Witch Trials:

Our heartfelt appreciation goes to Clyde Perkins for the enormous task of creating this page. Thank you Clyde!! 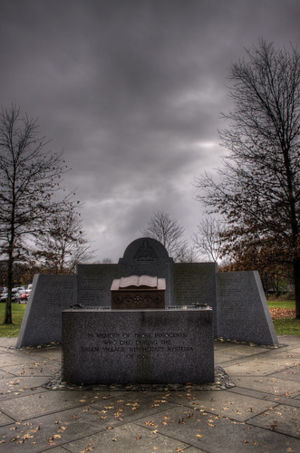 Leave a message for others who see this profile.
There are no comments yet.
Login to post a comment.
[Living Kelts]
I don't believe Giles Cory was executed. He died during interrogation. It appears to say as much on his profile.
posted Oct 20, 2021 by [Living Kelts]

Traci Thiessen
True ... he was pressed to death as a part of interrogation. "'About noon, at Salem, Giles Corey was pressed to death for standing mute,’ wrote Samuel Sewall on 19 September 1692. Corey had pleaded not guilty to the charge of witchcraft, but he refused to agree that the court (which had found all the defendants tried to date guilty) had a right to try him. The threat of pressing was supposed to frighten the defendant into cooperation, but Corey was more stubborn than expected. He may have thought that if he could not be found guilty his land could not be confiscated from his family." From AmericanAncestors.org.
posted Oct 20, 2021 by Traci Thiessen

Alice (Galligan) Glassen
I’d like to but I’m not very familiar with editing pages etc. right now I only have my parents on here lol.

Can I join even though I don’t have any experience? I do have a Ancestry page with all my info. Not sure how to get it all here.

See the information I sent you by private email; you will also be contacted by a WikiTree specialist to assist your learning. We look forward to your participation as you become able to "to get it it all here."

Please email me for any additional help.

MaryJo Blanchard
Is there HTML for "... ... ... is a descendant of Susannah (North) Martin? Similar to one for Mayflower for example:

... ... ... is a descendant of Mayflower Passenger John Billington.

Jim Angelo Jr
On-line access to a Research Guide, Indexes and Primary Sources (including materials and events in places other than Connecticut) is available free at CT State Library
posted Feb 17, 2017 by Jim Angelo Jr

Summer (Binkley) Orman
Just saw that John Winthrop (Winthrop-12) is my 11th great uncle - he was one of the judges. :(. Edit: I was messaged by someone who said I was mistaken about him being a part of the trials. This may be true, however, he was instrumental in the execution of Margaret Jones, a Puritan midwife and the first person executed for witchcraft in the Mass Bay Colony. https://en.m.wikipedia.org/wiki/Margaret_Jones_(Puritan_midwife)
posted Mar 25, 2016 by Summer (Binkley) Orman

Cheryl (Stone) Caudill
Here is an online edition of SALEM WITCHCRAFT With an Account of Salem Village and A History of Opinions on Witchcraft and Kindred Subjects by CHARLES W. UPHAM
posted Mar 18, 2016 by Cheryl (Stone) Caudill
Abby Smith
wondering why Sarah Pease (Salem Witch Trials) isn't linked to her profile. She is here: http://www.wikitree.com/wiki/Unknown-80724
posted Jan 08, 2016 by Abby Smith

Tanya Kasim
It reminds me of The Crucible, a play Arthur Miller wrote in the 1950s.
posted Jul 11, 2015 by Tanya Kasim

Tanya Kasim
I have a few ancestors who were accused of witchcraft.
posted Jul 11, 2015 by Tanya Kasim

Paula J
Really great space page! It shows the scope of the Salem Witch Trials all at once. This took a lot of work and it is very impressive!!
posted Jun 19, 2015 by Paula J