To be Let by Private Treaty, And may be entered upon either at Martinmas or in September next,

ALL that Newly-erected and Commodious DWELLING HOUSE, situated at SAND AREA, STRAMONGATE, KENDAL, and now in the occupation of DANIEL HARRISON, Esq., the owner.

On the Second Floor, Music Room, five Bed Rooms, and one Dressing Room.

On the Third Floor, five Bed Rooms, with two Dressing Rooms, and Attics over them.

Attached to the House is a small Garden and Yard, containing a Three-stalled Stable, with Hay-loft above, and a Carriage House with good Room over it.

Further particulars may be known on application to DANIEL HARRISON, Esq., Sand Area, or at the Office of Messrs. T. and E. HARRISON, Solicitors, Lowther Street, Kendal.

James Harrison became the tenant of the present premises on their erection by Mr James Thompson,

1954 - Flooding 'A boat was brought from Lake Windermere and operated on the “lake” which surrounded the Provincial Insurance Company’s offices in New Road and Stramongate, which was closed to traffic throughout the day.'[1]

2019 - Historic Listed former Insurance Hall in Kendal to be sold Simon Adams of selling agents Peill & Co in Kendal, commented ‘We are pleased to be able to offer for sale the former insurance hall at Sand Aire House, and hope that it will be of interest to a range of potential occupiers, or developers in order to breathe life back into this part of the building, which has remained vacant for a while after earlier proposals for the site did not proceed. Historically, there were plans for a bowling alley and leisure scheme (planning permission was granted by South Lakeland District Council but never implemented) and the building is be suitable for a range of uses including offices, showroom, and leisure. Our clients are seeking a sympathetic developer to purchase the property on a 999-year lease (the equivalent to freehold), and we are currently conducting viewings of the space’.

2020 - Historic Kendal listed building sold Simon Adams of Peill & Company commented “we are delighted to have acted on behalf of our property investor client in securing a sale of over 6,000 sq ft of space in the centre of Kendal and we look forward to seeing the historic listed building being brought back into commercial use”. 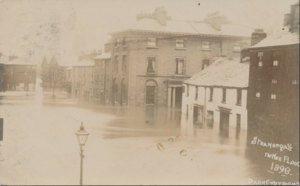