[send private message]
This page has been accessed 494 times.

This summer camp in Eliot, Maine was established by Elizabeth (Masson) Lanier daughter-in-law of American poet-musician Sidney Lanier (1842-1881). An earlier camp was created in 1908 by her husband Sidney Lanier Jr. who died in 1918. Elizabeth decided to open the camp again in 1930 with the help of her three sons, Sterling, David and Jonah (John). The co-ed camp was open to girls and boys aged 5 to 18 and usually had about 120 residents for the eight weeks each summer during the 1930s. It was located on a farm in Eliot, Maine (near Portsmouth, New Hampshire) along the banks of the Piscataqua River. In addition to the popular summer camp activities of swimming, boating, hiking, horseback riding, crafts and games, Lanier Camp placed a special emphasis on singing and dancing. Campers were taught folk tunes, sea chanteys, Irish pub songs and spirituals. Dances taught on the camp's Dancing Green were The Old Mole, Hunsdon House, Morris Dances, Kentucky Running Sets. A piano was located beside the green to provide the music. When dancers felt confident enough they dressed in costume and performed for other campers. Everyone joined in for the Virginia Reels that were performed in one of the two barns. The other barn, located near the Kitchen House was used for meals. Campers were encouraged to sing while they waited to be served which encouraged a congenial atmosphere.

Through her connections, Mrs. Lanier was able to attract performers to entertain her campers. There were singing groups, classical musicians, poets and lecturers. Wednesday nights were music nights when campers gathered on the broad back porch of the Lanier House with the rest spread out on the lawn to listen to live performances. Monday and Friday nights were for dancing on the Dancing Green. Summer Sunday Service was conducted under a grove of stately pine trees. A portable organ was brought out on a dolly to accompany the hymns, prayers and talks. They sang an anthem based on a Sidney Lanier poem: "Into the woods my Master went, clean forespent, clean forespent..." A popular annual event was HAY NIGHT. After the grass had been cut, dried and stacked in rows, the campers slept outdoors on new-mown hay, under a star-filled sky. They rose at dawn and launched a hay fight with their bedding, boys against girls, each side claiming victory. Then it was back to the cabins to clean up for flag raising and breakfast at 7.

The camp was a magical escape from the hardships of the Great Depression. It was closed by 1940. Elizabeth Lanier died in 1961.

Profiles which link to this page.

The source for this information is my father John Russell Miller (1915-1994). He left extensive notes, a rough diagram and photos. He told me many times how much he loved the camp. Emotionally it must have been even more meaningful because his mother died in 1926, his father in 1928 and he was then living with his spinster aunt, Frances Prichard. She knew Elizabeth Lanier and was asked to organize the supplies and meals for the camp. So the first summer for John Miller at Lanier was at age 14. As he grew older he took on more responsibilities as a camp worker.

Memories: 2
Enter a personal reminiscence or story.
Pat Miller
"Jonah Lanier (Elizabeth's son) took charge of the farm. He was kept busy looking after the horses and cows, the market gardens and the haying. His passion was trying to grow oversize vegetables. During the final weeks of August he would trundle a wheelbarrow down to the barn where we had our meals and parade his prizes around the dining room; carrots as thick as your thigh, squash and pumpkin too big for one person to carry. Aunt Frances (Prichard) frowned on this ritual, regarding the trophies as freaks of the vegetable kingdom, totally unfit for human consumption." Memory of John Miller
posted 23 Aug 2018 by Pat Miller   [thank Pat]
Pat Miller
"Carleton Mabee and I were assigned kitchen duties and part-time counselling in 1930. This entailed gathering vegetables and weeding the gardens. Sometimes by late afternoon following a hot day in the fields, we could be stretched full-length between rows of vegetables, removing weeds slowly one by one, while at the same time engaged in philosophical discussions. " Memory of John Miller
posted 23 Aug 2018 by Pat Miller   [thank Pat]
Login to add a memory.
Images: 8
Lanier Camp Booklet 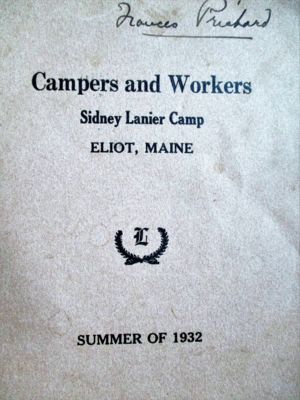 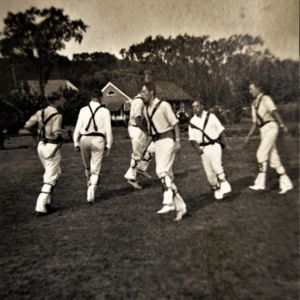 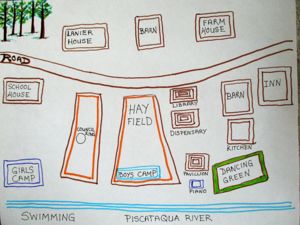 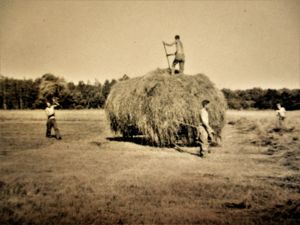 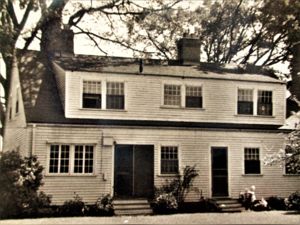 Debi (McGee) Hoag
Pat, I adjusted the tag boxes to contain only one word each. I left off 1930s since only three can be used and the start/end dates accounted for the 1930s. Feel free to adjust it as you please. Debi
posted Aug 25, 2018 by Debi (McGee) Hoag