[send private message]
This page has been accessed 990 times.

This profile is part of the Smith County, Texas One Place Study.

Smith County was created and organized in 1846 from Nacogdoches County, It was named for Texas Revolutionary General James Smith. Tyler is the county seat. [1]

1788 Frenchmen, Pedro Vial and Francisco Xavier Fragoso traveled through en route from Santa Fe, New Mexico to Natchitoches, Louisiana.[2]
late 18th century, disease as well as other Indian threats forcd the Caddos to move.[2]
1820 Cherokees (leader Chief Bowl), settled on the Niches Saline after being driven away from North Texas by other hostile Indians. led by Chief Bowl, had settled at the Neches Saline after being driven from North Texas by hostile tribes. [2]
1823 George W. Bays, was first Anglo settler, arrived on the Neches Saline. In 1836 there were forty people, three trading posts, and a salt works on the Neches Saline, but after the fall of the Alamo the settlers retreated for a while to Lacy's Fort, located nearby in what is now Cherokee County.[2]
1826, 28, 31 -Mexican government issued land grants for Smith County land to grants to David G. Burnet in 1826, Peter Ellis Bean in 1828, and Vicente Filisola in 1831. [2]
1823 - George W Bays was the first Anglo settler on the Neches Saline, but left after the Fredonian Rebellion.
1836- 40 people, 3 trading posts, and a salt works were on the Neches Saline. [2]
March 13-1836 After fall of the Alamo, settlers retreated to Lacy's Fort, in Cherokee County. Settlement was retarded due to the Cherokees. [2]
1839 war with Cherokee ended with the removal of the tribe. [2]
1840-46 -small farmers from Alabama and Tennessee arrived to homestead. [2]
July 1846 Smith County was marked off from the Nacogdoches District and named for Gen. James Smith, hero of the Texas Revolution and the Republic of Texas. Tyler was designated as the county seat and has remained so. The county commissioners' court was elected and met for the first time before the end of the year. [2]

1850 the county had population of 4,292, with 717 black slaves. There were 7 local churches, and 1 Missionary Baptist, and 1 Methodist church in Tyler. It had several stores, with 276 residents with 7 schools, being taught by one teacher, containing about 19 students each. The school in Tyler had 4 students. [2]

Trade was shipped to New Orleans via Shreveport, then hauled by ox-drawn wagons to Tyler on the Dallas-Shreveport Road.[2] Residents grew peaches, apples, grapes, blackberries, and vegetables for home use.[2]

Camp Ford was the largest Confederate Prisoner of War Camp west of the Mississippi River during the American Civil War and was where Sheriff Jim Reed of Collin County and Judge McReynolds, former chief justice of the district, were seized and lynched by "Regulators." The original site of the Camp stockade is now a public historic park, owned by Smith County, Texas, and managed by the Smith County Historical Society. The park contains a kiosk, paved trail, a cabin reconstruction, and a picnic area. It is located on Highway 271, 0.8 miles north of Loop 323.[2]
1862-65 - army physicians established a post hospital at Planter's Hotel. Medicines were made for the Confederate Army at the Confederate States Chemical Laboratory, E of Tyler at Headache Springs. The blockade ended the importing of foreign medical supplies, surgeon W. R. Johnston and his staff made medicine and liniments from native plants, as well as distilling medicinal whiskey. [2]
1862-65"Kirbyville," established near Tyler by Capt. John C. Kirby, operated as a transport depot, housing workers who made wagons, harnesses, caissons, and saddles. A local shoe shop was one of only five in the Trans-Mississippi Department of the Confederacy. Vegetables and meat, primarily pork, produced by county farmers were used to feed military personnel. [2]
Slavery Slavery movement

1866-70 Reconstruction was a difficult time. The war cost the lives of many of the county's young men and had brought drastic material loss. County residents were faced with loss of value in businesses and farms. Land values had decreased from a total of $1,764,661.[2]
1870-Tyler had become a stop on the routes of five stagecoach lines for passengers and mail and became a legal center, with 31 common schools, 45 churches, and 5 Masonic lodges were here.[2]
1871- several Anglo citizens were on trial for violence against blacks. This resulted in a gunfight in the streets of Tyler between white citizens and black state policemen that left two whites dead and several African American policemen wounded. Three years later Jack Johnson, an African American man accused of murder, was lynched by whites. Violent years.[2]
1880- Smith County contained 104 miles of track. Small industries were Taft's Iron (a rolling mill), Daniel Jones's wagon factory, and the Mechanicsville furniture factory.
1890-1924- Industries-a box manufacturer, a bottling works, and a cigar factory, 2 national banks, 4 sawmills, an ice factory, and 6 canning companies. Texas College, a black Methodist college primarily for educating schoolteachers, opened in Tyler in 1894. A second black school, Texas opened in Tyler in 1905 and changed its name to Butler College in 1924.Baptist Academy,
1920- 38,000 bushels of peaches and nectarines, and yielded 1,832,612 quarts of strawberries on667 acres. They harvested large numbers of peanuts. The cotton output remained stable, with 24,154 bales of cotton harvested. Swift and Company and the Armour Company had come to Tyler, and the number of hogs had risen by 3,000 during the decade. [2]

1920-30 boll weevil often destroyed a field before it could be harvested. The number of livestock had also fallen drastically. The rose industry continued to thrive. [2]
1932 the Southern Pacific purchased controlling interest in the Cotton Belt and intended to move the central offices out of Tyler. More than 1,000 employees faced losing for their jobs. Tyler won the case after a court trial. Tyler, however, won the case, and the offices remained there.Highway 80, which bypassed Smith County and diverted the Shreveport-Dallas traffic.[2]

1931 Guy V. Lewis drilled on the first oil well in Smith County. His well was part of the original East Texas oilfield; soon other fields, including Chapel Hill, South Tyler, Mount Sylvan, and Sand Flat, were being developed. Many oil companies and field developers established offices in Tyler. Suddenly, land was a valuable commodity. The value of county farms increased to $82,351,187.
1959- The Smith County Historical Society, a 501(c)(3) non-profit organization, was founded by individuals and business firms dedicated to discovering, collecting and preserving data, records and other items relating to the history of Smith County, Texas.

The Mexican government issued grants for parcels of land on the Neches Salone (now in Smith County). These included grants to [[Burnet-247|David G Burnet] in 1826, Peter Ellis Bean in 1828, and Vicente Filisola in 1831.

1848 Courthouse - no image Within 5 years, (3) three log cabins were courthouses for Smith County.

1851 Courthouse -
Then in Dec. 1851 a cornerstone was laid for a new courthouse to be the first brick building in Tyler. The building was 2-story, dimensions 40 X 70 feet. It was placed in center of square. [3]

1910 Courthouse - a Beautiful courthouse was built, which lasted many years..

The county has a total area of 950 square miles, of which 921 square miles is land and 28 square miles is water. It is comprised of rolling hills, many of which have timber The Sabine River forms the northern border while the Neches River and Lake Palestine form part of t he southwestern/western border In addition to the major highways (listed below), the county infrastructure includes some 1,180 miles of two lane county roads.

There were 76,427 households, out of which 34.8% had children under the age of 18 living with them, 51.8% were married couples living together, 13.3% had a female householder with no husband present, and 30.7% were non-families. 25.3% of all households were made up of a householder living alone. The average household size was 2.60, the average family size was 3.13.

There are 32 locations in Smith County on the National Register of Historic Places.

Those wishing to attend institutions of higher learning in the area can attend: 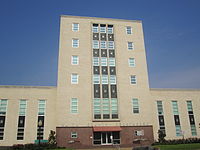 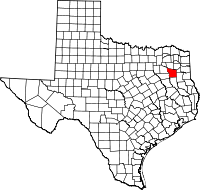 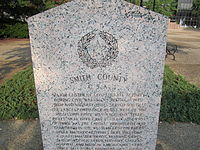 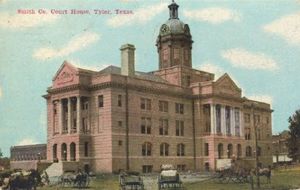 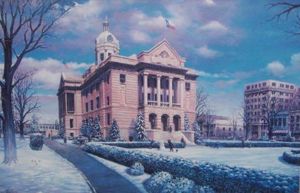