[send private message]
This page has been accessed 255 times.

This is a general guide to the categorization of the South African regional structure, locations and place names where South Africans were born, lived and died. South Africa’s very complex geopolitical history arising from many small republics and changes in political status has been considered.

The South Africa Roots Project expressed very great concern with the proposals made thus far and their entire thinking is to keep it simple so that South African users not familiar with the very complex history will not be confused.

Therefore, it has been agreed that, for purpose of categorization, the following very broad and significant periods defining South African history shall be a guide and shall define the broad basis for division and creation of the categorization structure:

The category tree will work down from the standard categorization structure for regions:

The tree structure needs to be trilingual (Afrikaans, Dutch and English). Presently there is no Afrikaans language tree for regional categories, but initiatives are in place to introduce this. This is a technical task and best not attempted without some experience in the use of the {{Aka|<name>|<language>}} template.

South Africa, as a geographic region, has both historic and current places. Before 1910, there was a proliferation of both colonial interests and free independent republics created, when South Africa was not one unified nation. It is thus agreed that the first tier, under South Africa, [[Category:Suid-Afrika]] (yet to be implemented) and Zuid-Afrika, should be:

Historic places have been simplified to broadly define the historic territories, no matter the political domination, with perhaps exception of the Cape, where the Dutch and British Capes are separate [2]:

The immediate sub-categories to these categories shall be the districts (particularly in the case of the Dutch Cape) or the towns and settlements that evolved in the geographic area during these periods. It is important that the category is clearly date defined to prevent confusion.

Ideally, the categorization of South African places should be a single entity running from 1910, time of the Union, through the Republic up to 1994 and then into the new South Africa. In 1994 and onward, there has been a significant change in the provincial name structure, and place name changes. It is proposed to have two subdivisions comprising:

Generally, there should only be one category for a district or town in each of the period defined sub-categories. Full use of Category Information Boxes (CIBs) shall be encourage to define bilingual or multilingual names, name changes, and period transitions. In principal, use is made of the town or settlement name in the language it was founded.

Place names need to be structured to ensure there is no ambiguation. Some South African place names on their own can be found in Europe and North America, or even in different South African provinces, although rare. We have Edenberg in Gauteng and in the Free State; Elim in Limpopo and in the Western Cape. A Port Elizabeth may be found in New Jersey; Margate is also found in Kent; there is also a Pretoria in Georgia State USA!

Therefore, categorization of districts and towns should be named in the format [[Category:<district or town>, <province>]]. [4] This naming format (combining town name and province) eliminates duplication. The format applies equally to places using various designations such as city, town, settlement, or village. To use our examples:

Place name categories shall only be created as and when the need for the place category arises. Every category should carry a simple sentence or paragraph outlining the purpose of the category. Your attention is drawn to these Categorisation Guidelines 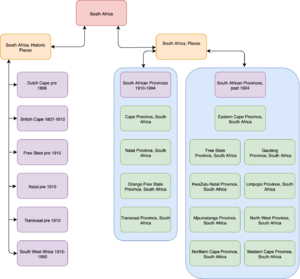