[send private message]
This page has been accessed 2,781 times.

The goal of this project is to follow the changes that happened on St Barnabas Street, who resided on the street, their occupations, and the history of St Barnabas Church, School, and work places.

Here are some of the tasks that will be completed.

To cater for a fast expanding population of the town, the original church, was built in 1863 on land between St Barnabas Street and College Street. Christening registers start in 1873, marriages in 1894 and burials in 1903.

The simple early church was demolished and rebuilt, here is an exert of the original article that was published in the Northampton Mercury on 11 January 1873.

"OPENING OF THE SCHOOL CHURCH OF S. BARNABAS. On Monday afternoon the new school church at Wellingborough, which has been dedicated to S. Barnabas, the Apostle, was opened for Divine worship, with the sermon by the Lord Bishop of Peterborough. It is an iron construction of the Gothic style of architecture, very similar to that recently erected on the Lower Mounts, at Northampton, only that it is somewhat larger, and resulting from its larger dimensions it is a little more imposing and handsome" Link to the full article[1].

By June that year they had held a concert to help pay off the debt from building the church:

The church of St. Barnabas, at the west end of the town, was erected in 1873 as a chapel of ease to the parish church. It is built of red brick with Bath stone dressings in the style of the 14th and 15th centuries and consists of chancel, nave, aisles, vestry, and south porch. Outside, at the west end, is a Weldon stone cross erected in 1920 as a War memorial[3].

An exert from an article in the Northampton Mercury date 03, January reads:

"THE CHURCH DECORATIONS: St. Barnabas Church.- The decorations hoav not been carried out so largely at this church, never the less it is prettily adorned with texts and evergreens. Over the west door, in red letters, framed with evergreens, "Unto us a child is born; unto us a son is given;" and over the communion table, in the same style, "Emmanuel, God with us." On the walls are several shields, bearing the sacred monogram and other emblems, The windows are also prettily decorated with evergreens. Taken altogether, the Christmas decorations have been carries out with good taste, and many thanks are due to those who must have given many valuable hours to this labour of love." Link to original article[4]

An exert from an article in the Northampton Mercury date 10, January reads:

"The first anniversary of the opening of St. Barnabas Church was commemorated on Tuesday, by a tea meeting held in Freeman's School, after which there was a full choral service in St. Barnabas church, which was filled on the occasion. The prayers were intoned by the Rev. R. P. Lightfoot, and the sermon was preached by the Rev. F. W. Robinson, vicar of St. Peter's, Leicester." Link to original article[5].

The attractive red brick church was completely destroyed by fire on Monday 09 May 1949[6].

This record was taken on the night of 03 April 1881 to include every person whether member of Family, Visitor, Boarder, or Servant.

This record was taken on the night of March 31, 1901 to include every Person whether Member of Family, Visitor, Boarder, or Servant.

This record was taken on the night of Sunday, April 2nd, 1911 to include every Person whether Member of Family, Visitor, Boarder, or Servant.

In December 1938 it was announced in the House of Commons that in the event of war, a National Register would be taken that listed the personal details of every civilian in Great Britain and Northern Ireland. This Register was to be a critical tool in coordinating the war effort at home. It would be used to issue identity cards, organise rationing and more.

I will be adding relevant copies of the original 1939 Register on each individual persons page (Feb 2017, numbers 70-84 completed).

Population Total inhabitants of the street: 213

May, 22 "The Surveyor also reported that St. Barnabas-street had been completed to his satisfaction by Mr. J. W. Sharman, and asked the Board to take the roads."[10].

November, 06 "Mr. R. Marriott, builder, attended, in answer to a summons from the Board, for not complying with the bye-laws, he having built a pantry to Mrs. Skyes's house, on the Victoria estate and an office to Mr. Watkins' House, in Barnabas Street, without giving notice to the board. -Mr. Marriott said it was entirely an oversight on his part, and he would take care that it did not occur gain. _The explanation was accepted and no fine levied [11]. 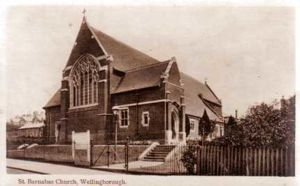 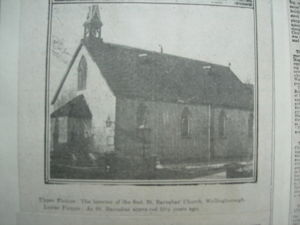 Article - Opening of the School Church of S. Barnabas