[send private message]
This page has been accessed 53 times.

Previous to 1850 the few Catholics who dwelt at Alden were obliged to journey to Lancaster, or Bennington, when they wished to hear mass on Sundays. In the early spring of 1850 Father Serge de Schoulepnikoff, who was then pastor at Lancaster, made an effort to organize a congregation at Alden. Land was bought on the 29th of April, 1850, from George Sudle [Suttel]. A little frame church was begun shortly after, and the corner-stone was laid by Bishop Timon on the 9th of November of the same year. The congregation, however, was not large enough to support a resident pastor, and the priest from Lancaster attended the little congregation occasionally until 1854, when a resident pastor, was stationed at Alden. Father Schoulepnikoff had charge of the little congregation in 1851, and again in 1853. The Rev. F. S. Uhrich came from Lancaster occasionally during 1852, and the summer of 1853. Father Rief came also a few times during the late summer of 1853. The first resident pastor was probably the Rev. N. L. Neumann, who came in March, 1854. The first baptism in the register was recorded on the 5th of March, 1854.

The first little church served the congregation until 1872, when the Rev. F. X. Kofler built an addition to the original building to give more room to the growing congregation. This building served the purposes of a church for the congregation until 1893, when the Rev. Peter Theis began the construction of the present brick building. Father Theis’ health gave way, and he was succeeded in February, 1894, by the Rev. Jos. M. Thies, who completed the church building begun by his predecessor. Bishop Ryan dedicated the building on the 29th of October, 1894.

The first school was organized about the time that the first resident pastor came to dwell at Alden. For many years after its inception lay school masters taught the children the rudiments of education and the principles of their religion. Among these teachers were: Mr. Smith, Mr. Victor Irr, and Mr. Eugene Irr, and they are still remembered by some of their pupils who are at present residents of Alden. In 1876 the sisters of St. Joseph took charge of the school, and they still successfully teach the children of the parish. The present school building was erected in 1882, by the Rev. G. Gysen.

For several years after a priest came to dwell at Alden there was no parochial residence, and the pastor boarded in the vicinity of the church with a family named Bohmer. The first parochial residence was built in 1860, by the Rev. M. Schinabeck. This was a small little building, which gave way in 1889 to the present commodious residence, which was built by the Rev. Peter Theis.

The Jesuit missionary, the Rev. Father Wenniger, conducted a mission here in 1854, and on that occasion he erected a great mission cross in front of the church which stood there until the year 1900. For several years the little mission of East Bennington formed a part of the Alden parish, and was attended by the priest from the latter place until a church was erected at Bennington Center, and these two little places formed a parish with a resident pastor at Bennington Center. 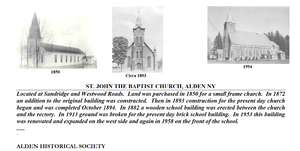