[send private message]
This page has been accessed 483 times.

Outside of daylight savings hours
Visiting hours: 7:30am - 6pm

2 graves enclosed in a white picket fence.
1) In memory of Ellen the beloved daughter of the late J.R. Harrison and wife of Maurice Kelly. Died March 28th 1876. Age 20.
2) In memory of James Robert Harrison who departed this life on the 12th January 1870. Aged 53 Years.

Cemetery Vandalism and news.
In 2009 it was reported in 2009 that a theft had occurred of a plaque, worth $1000, from the cemetery. There had also been littering and spray cans for tagging had been left at the site. The article (republished in Stuff newspaper) also had the following information on those buried in the cemetery:

The Rodney District Council is responsible for maintaining the tiny graveyard - one of two in a picturesque spot beside the water at Stanmore Bay – in which members of the Harrison family are buried.

They include Ellen Kelly, nee Harrison, who died in 1876. She was 15 in September 1871 when she married Maurice Kelly whose parents, both regarded as memorably flamboyant characters, ran the Wade Hotel at Silverdale.

She had two children before she died at the age of 20...

...Ellen Kelly's father, James Robert Harrison, who died six years before her at the age of 65, is buried in the same Stanmore Bay plot, around which the council had provided a low, white picket fence. The plaque was just in front of the fence.

A few metres away, under a bower of native trees, is a similar private cemetery in which are buried members of the Arkle family - after which Arkles Bay is named.

They include Andrew Arkle, one of two brothers who owned boarding houses facing the beach at Arkles Bay.

Near him is buried wife Winifrid, who died the same year at 45.
"Thieves prey on grave site" Jan 31 2009, Rodney Times 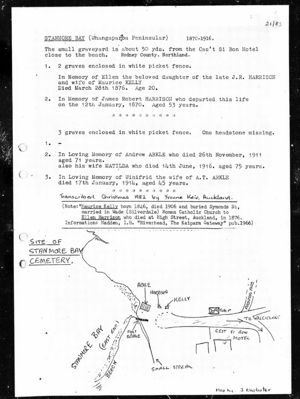