[send private message]
This page has been accessed 1,482 times.

Sterling-White Cemetery is located on a parcel of land that was under a Mexican Land Grant issued in 1824 to Reuben White, a member of Stephen F. Austin's Old_Three_Hundred. Today, this property lies within the town that is present day Highlands, Texas.

Formerly set aside as the White Family Cemetery around 1850, the grounds eventually became a community graveyard. Along with his extended families property, the land became known as the White Settlement. Although Reuben's burial is the earliest recorded (1848) in the cemetery, it is believed that older gravesites may exist.

As the cemetery expanded, new sections were developed and dedicated, now including lawn crypts, mausoleum crypts, cremation gardens and cremation niches. In 1987, the Sterling-White Chapel Funeral Home was erected on the property, and in 2005 the two entities were formally combined to become a single corporate entity called Sterling-White Funeral Home and Cemetery. Sterling-White Cemetery is recognized by the State of Texas Historical Society as a Texas Historical Cemetery, and in 1994, a marker (#10804) was erected on the property.

One of the most prominent features of Sterling-White Cemetery is the presence of a 3-bell Carillon Tower. More details on this tower and its origins are currently being researched.

Sterling-White Cemetery contains many interments for local historical figures, including:

The cemetery also contains many interments for our war heroes, and features a 'Garden of Honor' that memorializes those who served in the United States Armed Forces. 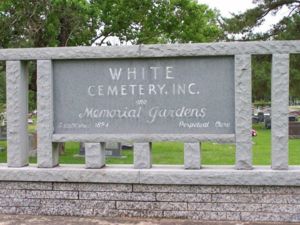