[send private message]
This page has been accessed 813 times.

This profile is part of the Sterling County, Texas One Place Study.

This area was part of the 1842 Fisher Miller Land Grant, but no settlement occurred.

1800-1860 Fur traders, Texas Rangers, and federal troops passed through the area
post Civil War -Ranching settlers arrived, this was the demise of the buffalo and the departure of Indian tribes. [2]
1853 Camp Elizabeth began as a Texas Ranger camp and later became hospital outpost facility of Fort Concho.[2]
1858 - Indian fighter and buffalo hunter, W.S. Sterling settled. S. J. Wiley also settled in the county about the same time as Sterling.[2]

1870s Frank and Jesse James hid out on Sterling Creek to raise horses and hunt buffalo.[2]
1870 - skirmish occurred on Lacy Creek at the present day Campstool Ranch, called the “The Fight at Live Oak Mott”[3]
1878 - W.S. Sterling became U.S. Marshal in Arizona and was killed in Apache ambush near Fort Apache. [3]

1879, the last battle between the Texas Rangers and the Comanche occurred on the "U" Ranch, when it was owned by Earnest and Holland.[2]
May 29, 1879 the Comanches, led by Quahada chief, Black Horse, left Fort Sill, Oklahoma, with 19 braves looking for buffalo. Within a month they had not found buffalo, so they killed a horse on the U Ranch (near Concho River ). This started a battle with the Texas Rangers. (Was this white horse thieves?) [4].

mid 1880s -Ranching was the main economy and early settlement of the area, the huge ranches lasted until the mid-1880's in what is now Sterling County .[2]
1880's During the Open Range times before fencing, the allocated land of railway companies versus the land of the state of Texas was existing in a checkerboard pattern, due to the large ranches lands not adjoining other pasture lands. [3]
1) Texas gave railway companies odd numbered sections (surveys, and the state retained ownership of even-numbered sections . [3]
2) For each section the railway received, it was required to survey the adjoining 640 Acres for the state . The railway had 12 years to sell the land.[3]

3) Large cattle ranches consisted of odd-numbered sections within each block.[3]

4) During open range, this was not a problem. Large ranches moved their cattle from pasture to pasture without having to compensate any land owner.[2]

5) The checkered pattern of land ownership did not create many problems during the time of the open range, as the large cattle outfits “controlled” vast amounts of open rangeland for grazing and could move cattle from pasture to pasture without having to compensate any other land owner or even the State.[3][2]

6) School and railroad land was available at $1-$3/acre, and a buyer could acquire as many as seven sections.[3]

1880, Colonel William Randolph McEntire purchased the 80,000-acre "U" Ranch from M.B. Stephenson. Established in 1876 by J.D. Earnest and W.J. Holland, and sold to M.B. Stephenson in 1879, the "U" Ranch, located 6 miles NW Sterling City on N Concho River and extended NW through Glasscock co. to Sterling Creek was the first ranch W of San Angelo in Tom Green County, Texas. Nearby ranches were the Renderbrook Spade Ranch in Mitchell County in the NE and J.B. Slaughter’s ranch in the NW.

U Ranch acquired more land so it included 250,000 Acres and bordered the Seven D Ranch in Pecos County in the S/SW.[3]

1870-1880 Since it was open range, the above described alternating "odd-numbered sections of land retained by Texas were accessible for cattle grazing from the cattle ranches that owned the even number sections.... i.e. the U ranch controlled an additional 250,0000 acres of rangeland totaling to 500,000 acres.. It grazed 50,000 head of cattle across 5 counties.[3]
mid 1880s Fencing began to be built by small farming settlers. built, tensions developed and clashes in times of drought. Confrontations between the settlers and established cattle outfits and eventually led to the Fence Cutting Wars.[3]

1882' W.R. McEntire, J.B. Wilson, and C.C. Slaughter drove 89 carloads of cattle, mostly overland, to rangeland in Orin Junction, Wyoming, controlled by the Driskill brothers, who owned the hotel in Austin, Texas. The cattle weighed 600 to 800 pounds upon arrival, when fattened up, in 2 years, they weighed 1,400 lbs each. [3]

1886 Camp Elizabeth was abandoned.[2]
1888 - W.R. McEntire’s eldest son, R. Billie McEntire, and his crew were driving the "U" Ranch cattle to new pasturage outside the state, or experimenting with various feed types at the feedlots. [3]
1893 - his last cattle drive, McEntire, and cowhands, with cattle, ran into a snowy blizzard. They were near Renderbrook Spade Ranch (owned by Snyder brothers), They cut the fence, drove their 1000 head of cattle to Renderbrook Spade Ranch's main horse pasture. All had to weather out the blizzard at the ranch headquarters, while the cattle were safe on the pasture. Then continued the cattle drive to Pine Bluff, Arkansas. [3]

1880 -1900 W.R. McEntire acquired or bought additional rangeland throughout Glasscock, Howard, Mitchell, Nolan, Sterling, Tom Green, and Reagan Counties, enlarging the "U" Ranch operations to include over 250,000 acres with 105,000 acres located in Glasscock and Reagan Counties. [3]
Boundary -"U" Ranch now extended from 12 miles W of Garden City to Grierson’s Spring in Reagan County, and included the section of the Goodnight-Loving Trail between Concho and Pecos Rivers This bordered the Seven-D Ranch in the SW. [3]

1883 - Drought occurred. Texas established the homestead law, and smaller settlers bought the "unowned even numbered" sections. This drought of 1883 precipitated the fence-cutting Wars.[2]Under the new homestead law, settlers began purchasing the “even-numbered” sections from the state for the benefit of the Common School Fund in 1883. this eventually led to the Fence Cutting Wars. [3]

With open range ending, W.R. McEntire realized that contiguous acreage would be increasingly important to the success of any cattle outfit. While he was in Dallas, he sent representatives from Tom Green County to acquire land and thus keep away other settlers, until he had the desired acreage. He wanted available acreage to be a buffer around the U Ranch by either selling/bartering or acquisition. Squatters and homesteaders --on his ranch land caused him to fence his ranch.. [3][2]

1890 W.R. McEntire sold 105,000 acres in Glasscock and Reagan Co., 100 horses 3,000 head of cattle to J.B. Slaughter, becoming U Lazy S Ranch. Sheep ranching began. Cotton was first planted.[3]
1890 era of the large open-range cattle kings ended. MS Ranch and Half Circle S Ranch were bankrupted, and the "U" Ranch being consolidated into contiguous acreage.[3]
1891- The county was established and organized from Tom Green County. A competition developed between Sterling City and Cummins for the county seat. Sterling City won, and most of the Cummins population moved to Sterling City by the end of the year. Cummins became a ghost town. [3][2]

1895 . Sterling City opened its first cotton gin in 1895, others, later. [3]
1896 R. Billie McEntire purchased 10,000 acres adjoining the "U" Ranch headquarters, included portions of Kennedy Ranch, Half Circle S Ranch, and the Peacock-Kellogg Horse Ranch.
1898 J.B. Slaughter sold his acreage and moved his cattle and operations to his new U Lazy S Ranch in Borden and Garza Counties.[3]
1898 -County voters elected to make Sterling a dry county, prohibiting the sale of alcohol.

W.R. McEntire’s initial "U" Ranch derivatives are owned and operated as distinct ranches by descendants. [3]

1900 136 acres were planted in cotton, (1910, 1,626 acres) [2]
1906 W.R. McEntire divided his ranching estate between his two sons, R. Billie McEntire and George H. McEntire. His daughter, Lula Elizabeth McEntire, received title to the estate not associated with agriculture.[3]
1910 - Santa Fe Railroad reached Sterling City from San Angelo, there were 135 farms and ranches in the county. [2]
1914 Boy Scout State Encampment was hosted by Colonel W.R. McEntire and George McEntire, Sr, on the "U" Ranch.[3][5]

R. Billie McEntire received title to Harrison Ranch in Dallas, and the n+ Ranch in Sterling County. He also received a cash advance from the dissolution of McEntire and Co. Of the same year, he purchased 10,000 acres in Nolan and Mitchell Counties, and had moved his family to Colorado City, Texas, to send his children to school.[2]

1915- 1925 James H. McEntire established the Campstool Ranch. The ranch was established on the Lacy Creek near the intersection with the Concho River on acreage that was initially acquired by his grandfather, W.R. McEntire, in 1884. 1955 Jamie Sue McEntire Cole, and son-in-law, Bill James Cole, first leased the agricultural production and then eventually became full owners of the ranch in 1981.[3][2]

James H. McEntire initially became the primary manager of the ranching operations in Sterling County (about 10,000 acres) while the other three brothers were primarily engaged in Mitchell and Nolan Counties (also around 10,000 acres). This partnership lasted from circa 1915 to 1928, and was dissolved as a result of the brothers becoming owners and subsequently managing their own operations in Sterling County. [3][2]

1920- Cotton gins eventually failed. Ranching expanded again.
1927 R. Billie McEntire sold the acreage in Sterling County to his sons.[3]Fowler and James H. McEntire purchased their brothers' interests (each owning 1/2 of the acreage in Sterling County.[3]
1927-1937 R. Billie McEntire ranched in Mitchell and Nolan Counties until his death..
Currently Fowler McEntire's grandson, Mackey McEntire, continues to use the original "U" Ranch brand on his ranch located on the Concho River.[3]

1980s Under Bill Cole, ranching operations were expanded into Colorado, California, and Nevada, and eventually became one of the single largest individual producers of sheep and wool within the United States.[2]
late 1980s Cole Trucking, a livestock transportation company, was established ( a fleet of dedicated trucks stretched from Texas to California). [2]
1989 Bill Cole sold all livestock and returned his focus to Texas, purchasing three additional ranches from 1989 to 1992 that totaled 40,000 acres. [2]

2008 the 9,000-acre Schleicher County ranch was sold. Bill Cole implemented over 50 years ago in Sterling County, and was recognized by the Crockett County Soil and Water Conservation District for the improvements to the natural resources on his ranch in Crockett and Val Verde Counties – fostering native vegetation through good brush management, wildlife management, and erosion control.[3][2]

This 1912 jail has 2 stories. It was built, 21 years after the organization of Sterling County, Texas. Built by Southern Structural Steel Co.. Mr and Mrs R.C. Stewart donated the deed for the property for the jail.. The Stone on the exterior was from a local quarry. It is not that the county needed 2 stories of jails.. Instead the Sheriff has a living area downstairs, and the 7 jail cells are on the 2nd floor. In 1960 an addition was completed it is located on property deeded to the county by Mr. and Mrs. R. C. Stewart. Stone for the exterior was quarried locally. The interior includes a downstairs living area for the sheriff and seven cells on the upper floor. 1960, an addition to the rear was completed.

3rd Courthouse, 1938- current The current courthouse is a Modern design by architect David S. Castle of nearby Abilene. The building is in very good condition.

Economics- The county continues to be a cattle, sheep county. The land and lack of rain is not conducive to farming a lot.[2]

Oil was discovered in Sterling County in 1947 and helped to bail out the area's declining economy. Petroleum production in the county increased, by 1990 2,455,579 barrels of crude were removed since the discovery of oil.[2]

Politics - Sterling County supported the Democratic candidates in virtually every presidential election between 1892 and 1964; the only exception occurred in 1952 and 1956, when a majority of the county's voters backed Republican Dwight D. Eisenhower. The county went Republican in every presidential election between 1968 and 1988, however, and in 1992 a plurality of the county's voters supported Republican George Bush [6] 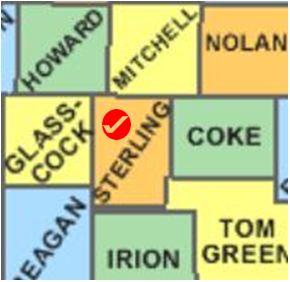 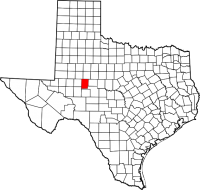 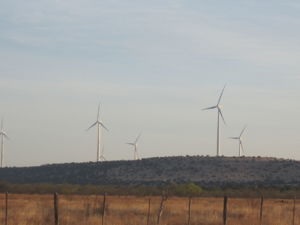 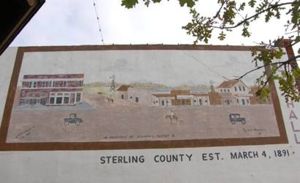 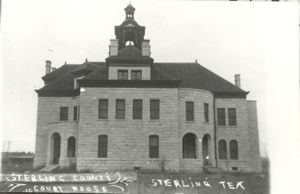