[send private message]
This page has been accessed 101 times.

Symonds Street Cemetery is a historic cemetery and public reserve in central Auckland, New Zealand. It is in 5.8 hectares of deciduous forest on the western slope of Grafton Gully, by the corner of Symonds Street and Karangahape Road, and is crossed by the Grafton Bridge.

Excerpts from Heritage New Zealand (see links below) are indicated by quotation marks: "Symonds Street Cemetery is one of New Zealand's oldest urban cemeteries, and possibly the earliest established under direct colonial government control. Located on Auckland's Symonds Street ridge, it accommodated burials from 1841, the same year that Auckland became capital of the new colony of New Zealand. Prior Maori use of the ridge had included pa sites and cultivations to the north, and a track may have run through or close to the site. When first established the cemetery lay well away from the colonial town, including its churches. This differed from earlier graveyards in New Zealand, such as those at Kororareka and Paihia, which followed the traditional British model of burial in churchyards. Physical separation was partly a response to prevailing concerns about the effects of burial grounds on public health, but also reflected the influence of broader Enlightenment ideas on the new colony, which stressed the separation between church and state."

"Major changes occurred through the 1860s and 1870s, when ideas about cemeteries as places of moral contemplation and edification led to a general beautification of the burial grounds. Trees were planted and paths were laid out. Monuments also often became more elaborate. Burials were subsequently restricted due to overcrowding but the cemetery remained Auckland's main burial ground until a new cemetery was established at Waikumete in 1886."

A large portion of the cemetery was destroyed for the construction of the Southern Motorway in the 1960s.

It is estimated there are over 10,000 interments, but less than a quarter of these have surviving memorials. Information on the challenges of recovery and restoration work is on Our Auckland Stuff preface on Symonds Street Cemetery by Geoff and Shirley Kendall (includes transcriptions).

"The cemetery still contains many of the trees planted during beautification, which themselves had symbolic meaning. The cemetery remains an outstandingly important repository of information about colonial New Zealand and New Zealanders, and is still used for commemorative events, heritage walks and wedding ceremonies."

Prominent individuals laid to rest in the cemetery include New Zealand's first colonial Governor, William Hobson (1783-1842), who was responsible for the signing of the Treaty of Waitangi in 1840, missionaries such as the Reverend John Hobbs (1800-1883), and early traders such as Frederick Maning (1811/1812?-1883) author of Old New Zealand.

Significant events commemorated by burials include the sinking of the HMS Orpheus in 1863, New Zealand's worst maritime disaster, and the battle of Rangiriri in the third New Zealand - or Waikato - War (1863-4). 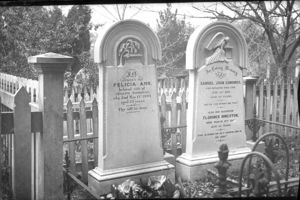 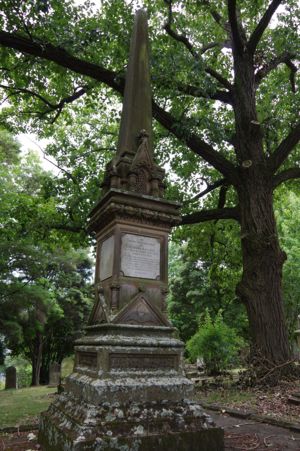