[send private message]
This page has been accessed 622 times.

This page is part of the Antrim Cemeteries Team.

Parking: Approaching from Ballycarry there is a slip road off to the left leading to a car park at the gates of the Graveyard.

Information: Templecorran Graveyard sits on what is believed to be an extensive early Christian monastic settlement. None of the original monastic buildings exist today but a Cross-engraved stone from this period stands in the Graveyard.
Throughout most of the Medieval period it is believed there was a Parish Church on the site.
In about 1613 a Scottish Presbyterian Minister, Rev. Edward Brice, was appointed to Templecorran to minister to the Presbyterian Ulster Scots who had settled in great numbers in the area. The present ruin in the northern section of the Graveyard dates from this period although it may be a renovation and extension of a pre-existing building. The shape of the early 17th century building is noteworthy in that it is in the shape of a Greek Cross where all the arms are of equal length. This church was short lived and was in ruins by the end of the 1600s. This was primarily a result of the disfavour of Presbyterianism at this time. In1847 the new St. John’s Anglican Church was built in Templecorran on a site adjoining the old Graveyard. It is still in use to this day.
The Graveyard at Templecorran contains many locally important memorials. The main one of note is that of James Orr the Bard of Ballycarry. He was one of the most important of the Weaver Poets of Ulster, a member of the Society of United Irishmen and took part in the Irish Rebellion of 1798.


Images: 2
Entrance to Templecorran Graveyard from the car parking area. 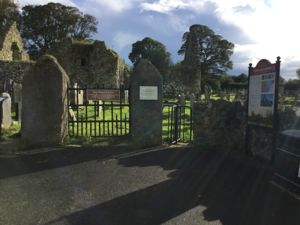 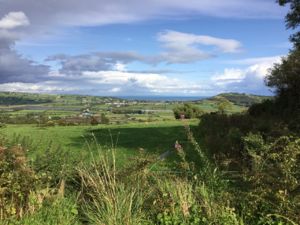