[send private message]
This page has been accessed 1,012 times.

By 1967 Hanoi had concluded that the war had reached a stalemate. The more militant members of the Politburo felt that the time was right to go on the offensive. They had heard about the growing anti-war movement in the USA, they also knew that the majority of the city dwellers of South Vietnam did not support the Saigon Government and they hoped that this offensive would liberate the towns and cities which would lead to an uprising against the Americans by the South's war-weary soldiers, discontented peasantry and rebellious youth while breaking Washington's will to continue the War. A plan that was presented to them earlier in the year was handed to their most audacious commander, General Võ Nguyên Giáp, who modified it to fit his style of fighting. The Politburo decided it would begin during the Vietnamese New Year, Tết.

On January 21, 1968, the People's Army of Vietnam (PAVN also know as the NVA) forces began a massive artillery bombardment of the US Marine base at Khe Sanh, located in the Quảng Trị Province on Route 9. As General William Westmoreland focused his attention on the defense of Khe Sanh (a battle whose importance that was being compared to that of the doomed French struggle for Điện Biên Phủ in 1954), Giáp's troops poised to begin their real objective: the Tết Offensive. Throughout the offensive Westmoreland believed Khe Sanh was the main objective and that the offensive was a diversion. Many strategist now believe Khe Sanh was the diversion.

The PAVN had moved major units into the area as early as the fall and winter of 1967 and in response a build up of US Marine units occurred. Beginning in late January 1968 Khe Sanh Combat Base and the hilltop outposts around it were under constant North Vietnamese ground, artillery, mortar, and rocket attacks. Maneuvering PAVN units shrunk the perimeter of the now isolated base and the Marines tenaciously defended it under siege conditions. Westmoreland ordered other major US ground and air units to help the beleaguered base and it was finally reinforced on 11 April when the US Army's 7th Cavalry Regiment entered the camp. In June the Marines were ordered to start withdrawing from the base and on 9 July the flag of the National Liberation Front (NLF also know as the Việt Cộng or VC) was set up at Khe Sanh airfield. The Battle for Khe Sanh had diverted 30,000 US troops away from the cities that were the main targets of theTết Offensive.

Stars and Stripes Article: The Bloody Battle of Khe Sanh: 77 days under siege

Despite having sufficient intelligence that something was going to happen and a request from General Westmoreland, South Vietnam's President Nguyễn Văn Thiệu refused to cancel the Tết cease fire and ARVN units were allowed to go on leave to celebrate the holiday.

"Crack the Sky, Shake the Earth"

Shortly after midnight on 30 January Nha Trang, headquarters of the U.S. I Field Force, was attacked, followed shortly by Ban Mê Thuột, Kon Tum, Hội An, Tuy Hòa, Da Nang, Qui Nhơn, and Pleiku. These operations, however, were not well coordinated. By daylight, almost all communist forces had been driven from their objectives. All US forces were placed on maximum alert and similar orders were issued to all ARVN units. The latter, however, still responded without any real sense of urgency. Orders cancelling leaves either came too late or were disregarded.

The last attack of the initial operation was launched against Bạc Liêu in IV Corps on 10 February.

Approximately 84,000 PAVN/NLF participated in the attacks while thousands of others stood by to act as reinforcements or as blocking forces. PAVN/NLF forces also mortared or rocketed every major allied airfield and attacked 64 district capitals and scores of smaller towns.

Huế (pronounced Hway) was a major autonomous city that had an important supply line running through it, Highway 1. The Sông Hương River (Perfume River) also runs through Huế, dividing the city into northern and southern parts.

In the early morning hours of January 31, 1968, a division-sized force of PAVN/NLF soldiers launched a coordinated attack on the city of Huế. They quickly overran most of the poorly fortified and defended city. Over the next month they were gradually driven out during intense house-to-house fighting, one block at a time. A large portion of the city was destroyed, more than 5,800 civilians had lost their lives during the battle and 116,000 were left homeless out of an original population of 140,000 but, the worst was yet to come.

During the months and years that followed, dozens of mass graves were discovered in and around Huế. Victims included women, men, children, and infants. The estimated death toll was between 2,800 and 6,000 civilians and prisoners of war. The Republic of Vietnam released a list of 4,062 victims identified as having been either murdered or abducted. Victims were found bound, tortured, and sometimes buried alive. Many victims were also clubbed to death. To make matters worse, reports soon circulated that South Vietnamese "revenge squads" had also been at work in the aftermath of the battle, searching out and executing citizens that had supported the communist occupation.

Saigon, home of the National Radio Station, was the most important NLF target. It had planned to broadcast a tape recording of Hồ Chi Minh announcing the liberation of Saigon and calling for a "General Uprising" against the Thiệu government, but they were unable to broadcast due to the cutting off of the audio lines from the main studio to the tower. They eventually blew-up the station with themselves in it.

There were five other primary targets in the downtown area: the headquarters of the ARVN General Staff at Tan Son Nhut Air Base; the Independence Palace, the US Embassy, Saigon, and the Republic of Vietnam Navy Headquarters.

The US Embassy and the RVN Navy Headquarters were attacked within minutes of each other, but both objectives were defended and secured by anti-communist forces within hours. Again NLF forces sought out specific people and executed them, which led to the very public execution of a NLF officer by the National Police Chief.

By dawn most of the attacks within the city center had been eliminated, but severe fighting was still going on in the Chinese neighborhood of Cholon around the Phú Thọ racetrack, southwest of the city center, which was being used as a staging area and command and control center by the North Vietnamese. Fighting in this area ceased only after a fierce battle between the ARVN Rangers and PAVN forces on 7 March.

The polictical posturing that borne the Tet Offensive was a failure, not only had the Politburo failed to calculate the capabilities of their enemies, but they also miscalculated the amount of support they thought they would have in the south. Objectively the offense was the beginning of the end of the war. South Vietnam slid further into turmoil, American public opinion was wanning, General Westmoreland (arguably) was replaced and the sitting President of the United States of America did not seek re-election. 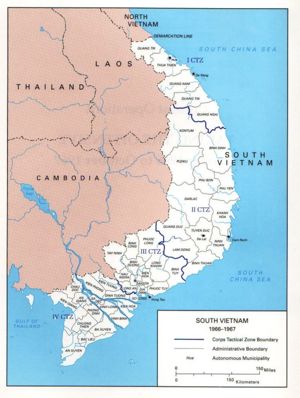 A map of communist targets during the Tet Offensive 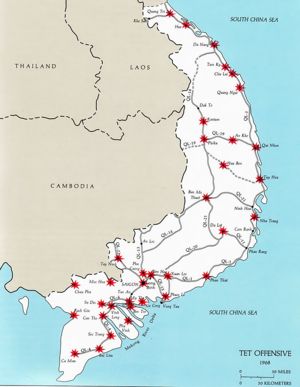 Cholon, the Chinese section of Saigon, after the Tet Offensive 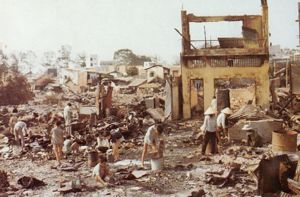 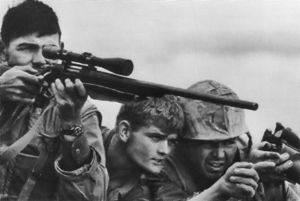 Bits of tattered clothing, sandals and slippers are examined by South Vietnamese women who lost relatives in the Huế massacre. 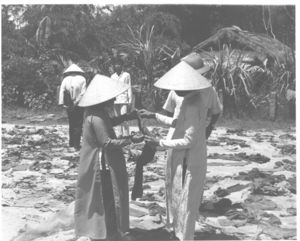