[send private message]
This page has been accessed 2,071 times.

In 1817, John Bell, a farmer from North Carolina,encountered a
strange-looking animal sitting in the middle of his corn field.
This started what would become America’s greatest ghost story.
The Bell Witch,or more likely a Spirit haunted,the Bell family
from 1817 - 1821.[1]The Bell Witch was so well known, it attracted
the attention of Andrew Jackson, future president of the United States.

In 1804 [2] John Bell,his wife [3]Lucy and their five children, moved from North Carolina, to Robertson County Tennessee.Their 350 acre farm was on the Red River. The family were members of the Red River Baptist Church, where John Bell became a deacon.The family led a peaceful life, and prospered for the first 13 years.They would have, four more children.[4] John Bell built a double log house, that was one and one half stories high, with six large rooms and a large reception hall. The house had a wide porch across the front, there was a large orchard at the back of the house.It was one of the best houses, in the county at that time 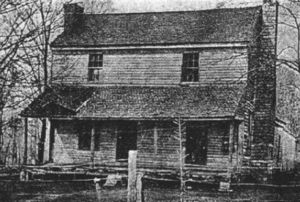 In 1817, [5]John Bell was in his corn field, when he saw a strange looking animal, who had the body of a dog and the head of a rabbit. John Bell shot at it several times, but the animal vanished. John Bell thought nothing more about the incident,and continued inspecting his corn. It was that evening, that the Bell family began hearing the first beating sounds, on the outside walls of their house. The sounds continued each night,getting louder and louder. John Bell and his sons, checked outside to see who was there,but it was always the same, nobody could be found. It wasn't long before John and Lucy's children, began waking up frightened and complaining of sounds, like rats gnawing at their bedposts. They also said, their bed covers were being pulled off the bed, and their pillows were thrown on to the floor.

The family began to hear faint, whispering voices too soft to understand, it sounded like a old woman crying or singing hymns. [6] It was Betsy Bell, the Bell's youngest daughter, that first began experiencing physically encounters.It pulled her hair and slapped her, leaving visible marks on her face and body, that stayed for days at a time. The disturbances had gotten worse over the next year, at which point John Bell told his friend and neighbor, James Johnston, about the strange things that were happening to his family. James Johnston and his wife, spent the night at the Bell home.They also heard and saw, the same terrifying disturbances, that the Bell family experienced.

Word of the Bell's problems, spread as far as Nashville.Where [7]Andrew Jackson became interested. John Bell, Jr. and Jesse Bell fought under General Andrew Jackson in the Battle of New Orleans. In 1819, Andrew Jackson decided to pay a personal visit. Andrew Jackson took with him a [8]witch slayer, and an entourage of men.As the Jackson party approached the Bell property, the wagon suddenly stopped. The horses tried pulling but the wagon simply would not move. After several minutes Andrew Jackson said that it must have been the witch. As soon as Jackson uttered these words, a female voice spoke, telling Andrew Jackson and his men that they could proceed, and that she would see them again later that evening. Once they arrived at the Bell's farm,the witch slayer tried to contact the Witch. "He cursed her, laughed at her and then finally attempted to shoot the Bell Witch with a silver bullet. He was slapped, battered and tossed about the room by unseen hands". By mid day the next day, Andrew Jackson and his men had already left the Bell farm.He later said "I'd rather fight the entire British Army than to deal with the Bell Witch." Andrew Jackson later became the President of the United States.

The Spirit continued to torment John Bell or Ol' Jack Bell, as the spirit called him. And vowed to kill him. John Bell's health grew worse, the Spirit would torture him, slapping his face while he was having a seizure. On the 20, December, 1820 , John Bell died. The family found a small vial of unidentified liquid ,that John Bell had drank the night before his death. It is said that after John Bell, Jr. gave some of the liquid, to the family's cat, the cat died almost instantly. The "Spirit" suddenly spoke saying, I gave Ol' Jack a big dose of that last night, and that fixed him." John, Jr. quickly threw the vial into the fireplace, where it shot up the chimney in the form of a bright, blue flame. The spirit was at at John Bell's burial site, where it laughed loudly and sang a cheerful song, about a bottle of brandy

After the death of John Bell, the spirit was still active through 1821.The spirit told the Bell family, it would be gone for seven years.The family that stayed on the property, Lucy, Richard Williams, and Joel, said the Witch did return in February 1828, once again shaking beds and the family hearing unexplained noises. It soon vanished again, the spirit said it would return to haunt the Bell descendents again in 1935. But no other hauntings of the Bell family or their property, have been reported.Over the years there have been a number of encounters near the property, and in the [9] famous Bell Witch Cave . The Bell Witch has been the subject of countless books, documentaries and movies. The 2006 motion picture An American Haunting, was loosely based on the Bell Witch legend.

When James Johnston (who hosted bible meetings and prayer studies at his home) ask what are you really, the spirit promised not to lie,said it was '"old Kate Batts imp come to torment old Jack Bell out of his life".Mary Catherine "Kate" Batts, was believed by many to have been behind the disturbances known as the Bell Witch. "The story is that John Bell and Kate Batts had the quarrel, over the sale of some slaves, and that the Bell Witch was Kate Batts come back, to get revenge on John Bell" 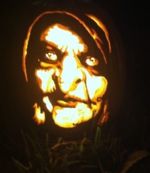 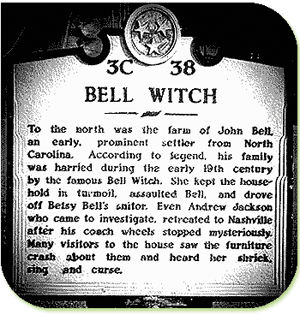 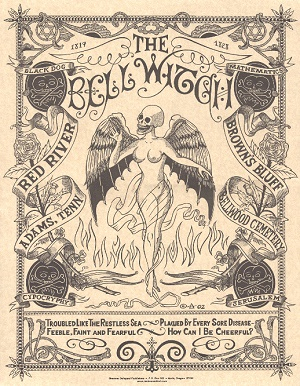 Liz (Noland) Shifflett
Hi! Could you change the WikiTree ID for the link to this John Bell's father at the bottom of this page* to Bell-9551? That's the William Bell who married Ann Jones. The other William Bell is of the Stone Church Bells (a different family).

* update - name & link was removed. That solves it too :D

Summer (Binkley) Orman
This happened less than an hour from where I grew up. I've read the books, studied, I've even visited the property. It's fascinating!! Legend has it that if you take anything from the property (rocks, etc) that the "witch" will come haunt you. My cousin took home 3 rocks from the cave when we visited. I refused to let her because I didn't want to risk getting in an accident on the way home, so she sneaked them into her purse. Nothing happened of course, but I was still furious. We didn't hear or see anything strange while there, but it was fun just to visit such a historical place.
posted Mar 24, 2016 by Summer (Binkley) Orman

Berry Henderson Jr.
Great ghost story Terry! There is another ghost story that as a teenager I went to investigate with 6 of my friends. We camped out at The Devil's Tramping Ground here in North Carolina. Strangest adventure of my life. I told the story to my children every Halloween when they were young.
posted Oct 24, 2014 by Berry Henderson Jr.