The Voegele and Halter Farms

[send private message]
This page has been accessed 62 times.

Joseph Voegele (1790-1868) immigrated to the United States from Soufflenheim, Alsace, arriving in New York City July 9, 1847. He was accompanied by his wife and seven children. Joining the Voegele’s on that journey was Martin Halter (1796-1879), his wife, and their five children. The Halter’s were also from Soufflenheim.

On September 3, 1847 Joseph Voegele and Martin Halter together purchased land in Lancaster. The deed tells us that they paid $600 to Hiram Clark for the northern part of lot 57 in the southern part of Lancaster. The parcel of land contained 50 acres. It was on Schwartz road and was originally part of the Buffalo Creek Indian reservation.

In August 1867, Joseph Voegele sold his farm to George Zaepfel, who lived a few doors up the road. Then in March 1873, George Zaepfel sold those 25 acres to his son Joseph Zaepfel.

More about the Voegele’s and Halter’s is available here:
https://drive.google.com/file/d/1wh5LPP1nUUg7z6FXRKyLgLIezB1lipgN 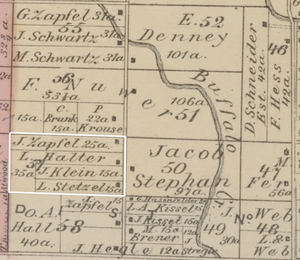