[send private message]
This page has been accessed 4,888 times.

As Westward Expansion of major parts of North America became possible with the Louisiana Purchase by the United States from France in 1803, the swell of immigrants from Europe and elsewhere had pushed the population higher, and toward the current boundaries of the United States. Feeling the building pressure of limited space, it was several decades after the Lewis and Clark expedition before most average folk began making the trek west.

From 1840 to 1870 more than 500,000 people made journeys to find a better life in the west. When these people decided to venture out, whether for economic, political or religious reasons, it was usually entire families bringing their possessions by covered wagon. With little exception the travel was made in groups or "trains" of wagons organized by wagon masters hired to guide them to a common midway or end point. From that terminus the individual or family made the short trip to their final destination, typically a homestead.

Many of these travelers endeavored to make the entire journey to the Pacific region. However, a good number stopped short in areas that became Montana, Colorado, and Utah. Regardless of their final destination, these "pioneers" or "settlers" were part of a great migration into the wilderness by foot and by wagon. Over time ancient trails became named routes, used repeatedly and becoming well known to contemporaries and history alike.

The most famous of these trails led west. Originating in Independence, Missouri, and called the Oregon Trail, it spanned over 2,000 miles. Other westward paths included the California Trail and Mormon Trail. There were also southern routes including the Santa Fe Trail, Southern Emigrant Trail, and the Old Spanish Trail (not to be confused with the Mormon Trail, the Mormon Road was a successor to the Old Spanish Trail). Stories of these trails and the people who traveled across the vast distance are etched into the culture and folklore of the United States. Whether the journey ended well or in tragedy (e.g.

Donner Party), their courage and fortitude is still celebrated more than 150 years later.

Listed below are brief descriptions of each major trail with resources and links to WikiTree profiles or pages that explore the lives and stories tied to each route.

The Oregon Trail is a 2,200-mile (3,500 km) historic east-west large wheeled wagon route and emigrant trail that connected the Missouri River to valleys in Oregon.

The California Trail was an emigrant trail of about 3,000 mi (4,800 km) across the western half of the North American continent from Missouri River towns to what is now the state of California.

The Applegate Trail was a wilderness trail through today's U.S. states of Idaho, Nevada, California, and Oregon, and was originally intended as a less dangerous route to the Oregon Territory.

The Old Spanish Trail (Spanish: Viejo Sendero Español) is a historical trade route that connected the northern New Mexico settlements of (or near) Santa Fe, New Mexico with those of Los Angeles, California and southern California. 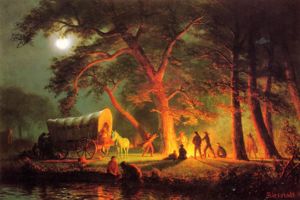 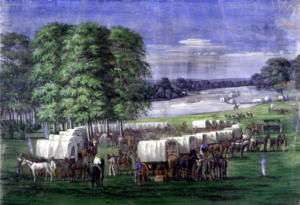 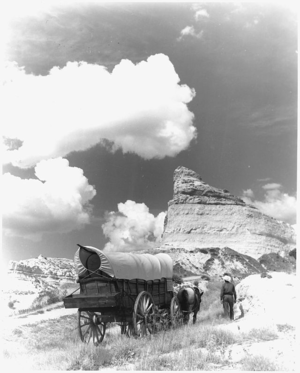 Leave a message for others who see this profile.
There are no comments yet.
Login to post a comment.
Jim Crigger
The Crigger Wagon train, Started in New York area, made it to Cumberland Gap, some settled in that area. Left the next spring and made it to Irwin Tennessee, on the Cumberland river. Irwin or Erwin, don't remember the way it is spelled. Then the next spring it headed out and made it to Kansas. The Sluss falily was with them to Cumberland Gap. And a history book is written about the Sluss family massacre. Mary Sluss is one of my ancestors in my Crigger/Krueger/etc.. line,
posted Nov 19, 2018 by Jim Crigger

Paula J
This is a new page an we will be adding more information about trails an overland travel companies.
posted Sep 18, 2014 by Paula J