[send private message]
This page has been accessed 835 times.

Looking for a Trant on WikiTree?

The TRANT name study is in the infancy of it's collection. Here's what I do know so far:

According to recent published Name studies dictionaries, it is established that there may be two entirely separate groups of Trants but the discovery of how and where Trants evolved is a primary goal of the Trant Name Study.

Although this is a worldwide study, I began my data collection in England and Ireland.

Trant was always considered among researchers in Ireland as a "Kerry" surname and it's quite numerous in county Kerry, Ireland. In Ireland, Trant is considered to be a derivative of the surname "Trewent".

It is also prominent in Devon, England. One of the goals of this Trant name study is to possibly collect all the Trants back in Devon and in the rest of the United Kingdom as well as in Ireland.

Sir Patrick Trant was the first Trant to register a coat of arms. He was created a Baronet of Ireland in 1686 so his Arms date to that time

Trant seems to be a surname in it's own spelling of "Trant" with early derivatives and/or deviants of Truant, Truan, Tant. It may also be derived from Treamhant, Treant. It is possible that Trant is of Norse origin. [1] However, In the IGI [2], I counted over a hundred Trants in Holland.

I became personally interested in it's "Kerry-ness" because it's the surname of one of my ancestors. My fourth great grandmother, who was born about 1770, was Mary Trant. She lived, married and died in Kerry.

If you have a Trant ancestor in Kerry, contact me and we will try to fit our Trants into the jigsaw puzzle of the Trants of Ireland and elsewhere.

The 1881 census for England and Wales listed 157 individuals with the exact surname of Trant.

Household numbers of the surname TRANT, by county, in the Griffith's (1847-64)

Please contact the project leader Maggie N. or leave a comment at the foot of the page. If you need help connecting your Trant relative to the global WikiTree or finding sources, just drop me a line.

To see the Trants listed in the Trant Name Study, check here:

To add a Trant profile, copy and paste

The prime goal of this Trant Name Study to collect together in one place every being who bears this surname and, maybe at some point, the variants of that surname. At this junction of the Trant One Name Study, there is no collection of variants. The hope is that other researchers will join our study to help make it a valuable reference point for people studying lines that cross or intersect.

The secondary goal of the Trant One Name Study is to improve the profiles with sources. When proper sources are found, the family reconstruction begins.

I have not selected a variant for the surname Trant at WikiTree yet. Of course, through the course of time in records, there are many deviants, like Trantt, Tant, Trent, Tront but those spellings could be entirely different surnames. 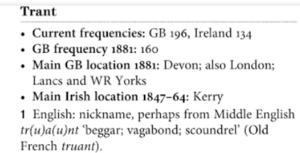 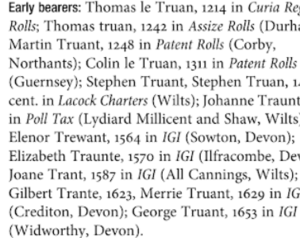 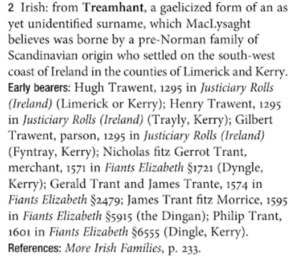 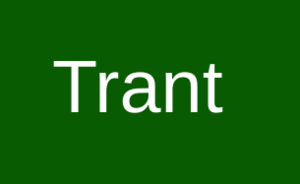 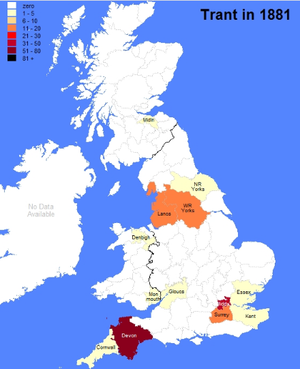