[send private message]
This page has been accessed 2,655 times.

Twillingate is currently a town of 2,269 people located on the Twillingate Islands in Notre Dame Bay. It is located off the northeastern shore of the island of Newfoundland in the province of Newfoundland and Labrador, Canada. It was incorporated on September 30, 1965. The Town of Twillingate includes such localities as Back Harbour, Bayview, Durrell, Gillard's Cove, Jenkins Cove, Manuel's Cove, and Wild Cove.

It was initially called Touillinquet, presumably by the French who fished there since the 16th century. Before them there is evidence of a long history of native people. The first British settlers (the only ones to leave descendents) to the area arrived in the mid 1700s[1].

The First European Settlers of Twillingate

In the early 1700s, when the first four permanent British residents settled there, the area around Twillingate was primarily Beothuk. Conflicts between the early settlers and the natives were common. By 1798 there were 139 European men and women in the area, and 176 children. By 1818, the "last of our aboriginals" was caught.

Much of the early growth in the community is due to the shipping business of John Slade (and later, his nephews John, Robert, and Thomas, the sons of his brother Robert), and many of the early inhabitants were his employees, or otherwise in business with him[2].

Excerpt from FIRST SETTLERS AT TWILLINGATE, And Their Conflicts with the Red Indians. By A. A. Parsons.[3]

Early in the seventies (nb. 1870s), the late Mr. T. D. Scanlon (one of the best informed Newfoundlanders of his day) found under the ruins of a “West Country fish-flake” at Back Harbor, Notre Dame Bay, a tin canister containing a very old and highly interesting “Diary of Events.” Some of the entries, he assured me, when talking the matter over with him a few years before his death, were made by the Peyton family, one of whom took a prominent part, on March 5th 1818, in the capture of Mary March, “the last of our aboriginals.” According to this diary, some two hundred years ago Twillingate was settled by four Englishman, namely: Moore, at Back Harbor; Smith, at the Point; Young at South Side, and Bath, at Jenkin’s Cove. Their social visits were few and far between--not oftener than three or four times a year...

Mr. Peter Picket, the oldest inhabitant of Fogo, used to tell his friends that he often, when a boy, heard the old folks talk of a peculiarity of the Red Men in putting out their fires ... When surprised they never left a fire burning behind them.

An old fisherman named Pilley, who came from Dorset to Slade & Co., some eighty years ago, said he often saw the Red Indians running along the strand of the Exploits as he sailed up the river in quest of wood. They always ran from the White Man.

Apropos to Slades: The founder of the house was “old Captain Tommy”, a mighty fisherman and a bachelor. His dress comprised a swanskin pants and blouse, protected when “on the ground” by a leather barvel. Cape Ann’s and rubber coats were not then invented.

In a ca 1770 letter, denouncing the Sabbath-breaking fishing trip of one Captain De La Rue[4], the following fishermen and townspeople signed:

In a letter, published 1799 in "The Missionary Magazine", the townspeople of Twillingate request a minister for the town, signed by 15 men[7].

We, the undermentioned principal inhabitants of Twillingate, contiguous to and under the government of Newfoundland , beg leave to lay before you our distressed state for want of the Gospel...Including families, and individuals, we are about 139 men and women, with 176 children, many whereof are approaching fast to the age of maturity...Hence we most humbly and ardently beseech you to send over and help us.

It is with sorrow we are constrained to say, that our finances will not enable us to offer more than L. 50 per annum towards the support of a minister. We do not speak by any authority from the people of Fogo...the inhabitants of that island are more numerous than ours, ...We therefore hope, that if a minister could be sent here, as he would have frequent opportunities of going there, that much good might be done among them also...

We remain, pious Gentlemen, your most humble and very obedient servants,


Images: 2
View of Twillingate, from the sea

Twillingate, on map of Newfoundland 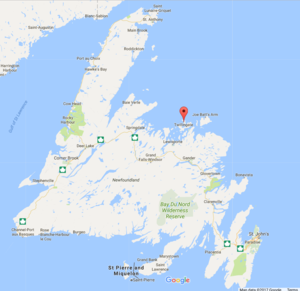