"The plane was flying at 22,000 feet and made a normal routine radio call at 2035 (8:35pm Zulu time, 2:35pm local Michigan time), but by 2040 the plane had crashed in a wooded area. The aircraft was observed by witnesses to have emerged from overcast clouds at about 3000 feet in a diving right turn. It then made a left turn and then back to the right before plummeting to the ground. It was estimated that the plane crashed at a speed of just over 500 miles per hour and at an angle of 60 degrees at the time of impact."

"The P-3A Orion weighed about 63,000 lbs and the Navy recovered approximately 53,000 pounds of wreckage from the crash site." The cause was unable to be determined.

A new re-investigation by Dave Trojan is still ongoing as of 2017, using modern techniques and new information gathered from historical research and interviews to determine the most likely cause of this accident.

All four crewmembers were killed in the accident: 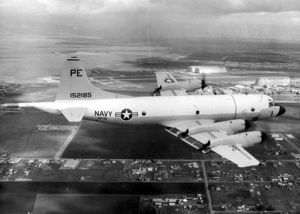