[send private message]
This page has been accessed 347 times.
This Study has been included in the One Place Studies Project.

The goal of this project is to create a comprehensive history of the city of Umatilla, Florida with the help of locals and with input from the families of the founders of this small town in Central Florida.

Right now this project just has one member, me. I am Cindy Williams Lesure and I am looking for more folks to help me gather the information needed to complete this page.

Will you join me? Please post a comment here on this page, in G2G using the project tag, or send me a private message. Thanks, lets make some history come to life!

Umatilla has a rich history that spans back over 100 years. We have compiled some interesting tidbits for you starting with the founding of Umatilla in 1856. Umatilla was founded in 1856 by Nathan J. Trowell. The name, Umatilla, was registered with the U.S. Land Office in Gainesville in 1876; was taken from an Oregon town of the same name; is an Indian name meaning "laughing waters."

In 1880, the first railroad, the St. Johns and Lake Eustis Line, came from Astor to Eustis, through the settlement now known as Umatilla. The earlier settlers began selling lots, dividing their properties into subdivisions, and the town experienced its first real growth. Truck farming and cattle were the major businesses of the earliest pioneers. They later began planting orange groves, the "big freeze" of 1895 killing most of the trees.

A general store, a hotel, a grocery store, a post office, a blacksmith shop, a packing house and four churches had been built by the turn of the century. The first schoolhouse was built in 1874. It had one door, no windows and hewed log benches for the pupils. The first teacher was paid $15.00 per month.

On November 8, 1904, an election was held for the purpose of incorporating Umatilla. Of 43 votes cast, 35 were in favor of the incorporation.

During the 20th Century Umatilla prospered, with citrus as its dominant business until the freezes of the late 1980's. Current businesses include shops, restaurants, a honey co-op, doctors & dentists, a pharmacy, banks, and a weekly newspaper. Our community also features active civic clubs, churches, a library, exemplary schools and ample recreational activities.[1]

See this website Umatilla Florida Code of Ordinances - Part I Charter to read more about the city ordinances.

52 Medflies Turn Up in Lake Traps

In April of 1998, it was reported that 52 Mediterranean fruit flies were found around the Umatilla area in the traps that state officials from the Florida Department of Agriculture had found. They began a spraying program to combat the flies.

Golden Gem of Umatilla, halted their operations to avoid spreading the flies. This in turn, caused financial hardships for the workers who could not work because of the infestation of Medflies.

"We've found a bunch," said Liz Compton, a spokeswoman for the Florida Department of Agriculture. "The number's going to be higher. The situation could change from day to day. We've found all the flies in a very concentrated area north of Umatilla. We think we've gotten it early, and we're going to be very aggressive."[3]

Most of the infestations in the state have occurred near major airports or seaports. Umatilla is inland and is an unlikely place to find a Medfly colony. Medflies are a threat to the state's $7 billion agriculture industry, particularly citrus as the adults bore into fruit and deposit eggs that develop into maggots and ruin the fruit. In previous years, nearly $25 million was spent to eradicate an infestation that started in Tampa and stretched to Orlando. Since this is the first time in memory that Medflies have been found in Lake County, growers and processors have only one choice and that is watch and wait.

Compton said the agriculture department has asked growers not to harvest fruit. Even backyard growers are asked to leave their fruit alone. "We don't want people picking oranges and giving them to their friends or family in other areas. That might just help spread the infestation."[3]

"Luckily, it is the end of the season, and we were winding down," said Golden Gem spokesman Phil Conant. He said the impact should be minimal and said juice operations were continuing normally. He stated state agriculture officials planned a visit to the plant.[3]

The agricultural officials used a ground spray on the Medflies in Lake County using Malathion, which is used routinely to spray for mosquitoes, but in a weaker concentration.


Images: 2
Gateway to the Forest Mural 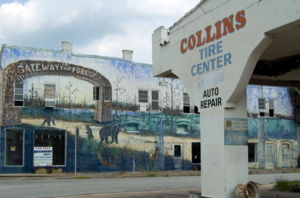 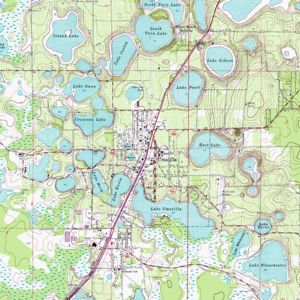