[send private message]
This page has been accessed 107 times.

Volhynia is a sub project of the Germany project

Welcome to the Volhynia Project! 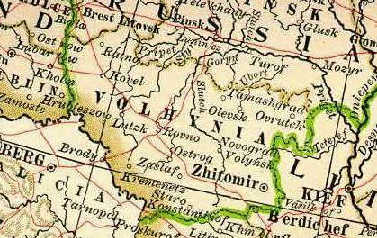 The Germans from Russia were descendents of ethnic Germans who settled in Russia in the years about 1763 through 1862. By the end of the 19th century, Volhynia had over 200,000 German settlers. The Germans in Volhynia were scattered about in over 1400 villages. Though the population peaked in 1900, many Germans had already begun leaving Volhynia in the late 1880's for North America, especially to the midwestern plains of the United States and Canada.

Volhynia itself was a gubernia, or province, of the Russian Empire until 1919, when the western part of Volhynia once again became part of Poland. In 1945, the entire area of the Volhynia Gubernia was absorbed into the Soviet Union, but the gubernia system was no longer used and the Volhynia name was used to identify a smaller region, called an oblast, in the western part of the old gubernia. Most of what was the Volhynia Gubernia is now in Ukraine, with a small part of northern Volhynia in Belarus. Its capital was Zhitomir.

Today, Volhynia isn't a Volga German area but is part of the Ukraine, Poland, and Belarus now. The Germans who settled made up a minority. Ethnic Germans in these areas were then expelled from these areas by 1945. Volhynia was annexed to Soviet Ukraine after the end of World War II. Most of the remaining ethnic Polish population were expelled to Poland in 1945.

If you would like to be involved in the Volhynia Project, please do the following:

Project Mission and Tasks at WikiTree

The mission of the Volhynia Project is to spot Volhynia profiles on WikiTree.