Surnames/tags: Webb Levesque Kupchun
No Profile Manager [adopt this profile]
This page has been accessed 373 times.

This is a mysterious family, indeed. My drive behind this is for my son, Landon Austin - he is also a Webb. I want to be able to help him go back further on his dad's side of the family.

I'll start with Marie Antoinette Levesque. I have collected many census records that give me a dim timeline of her life.

Marie came from Canada to New York on a ship with her sister in 1920. Marie was French and her family lived in Quebec. Her name and her sister's are clearly written out (see above ship manifest). Interestingly, her father is listed on the log as the name of the nearest relative from the origin of travel. I have found records citing Marie's father as Joseph. But, the "father" is listed with a different name. The name is illegible to me, but as it clearly is not the name Joseph. Maybe Joseph is not the father of this particular Marie. Either way, the bottom line here is that I have no idea what name that states.

Below is the US 1930 Federal Census. Marie is now living with John J. Murphy (her first husband). She takes the last name of "Murphy". It shows her mother being from Maine and her father being from Canada, which is the case in past records. Her approx birth date is very close as well. It seems that this is the Marie Levesque in question, just now married to John J. Murphy at a very young age. I have not been able to locate a marriage certificate, I'm still trying to accomplish that. They have two children together as listed above, Margaret and Marie. Both are toddler age. I did find John's Death record. He died in 1972 in Haverhill, MA.

From 1930 to 1940 I cannot find much on Marie. However, in that ten year time period a lot obviously happened.

The reason I write that is because this is now the 1940 US Federal Census listed above. Marie is now going by the name "Webb". I have no record of a marriage or divorce to/from John Murphy. I also cannot locate a source for Marie marrying a "Webb". However, she is listed as the "head of household" and her status on this census is divorced. From who, I'm unsure. One possibility is that she divorced Joseph Murphy and is living alone with her kids fathered by someone else, but it's unlikely once you read the questionnaire filled out by Marie at the bottom of the census. The likely scenario is that she divorced John, remarried a Webb, had his children and then divorced him......a lot of unanswered questions.

Additionally, you will see that now she has three new children all under the age of 3. Eleanor Webb, William J. Webb and Gerald Webb (which is my son's grandfather). This is now a total of 5 children. Where are the first two Murphy girls? They were not living with Marie at the time of the census in 1940. Where is the mysterious "Webb" whose name she has obviously taken but there is no proof she ever married, let alone divorced?

Another peculiar fact if you look at the supplemental questions at the bottom of the census....you will see that Marie filled out some marital information. Her first marriage was at 17 years old and she has been married more than once by 1940. That means there has to be some kind of info about that somewhere. She has also noted that she has had 7 children. (Not including still births). 5 of them are accounted for. Where are the other two? And who are they? What happened to them?

Below is a marriage certificate for Marie's son, William Webb. This certificate ensures that the particular Marie Levesque I was following, turned out to be the correct one.

Vital information was taken from the newlyweds on this marriage certificate. If you look at William's (their son) information, it shows his mother as Marie Levesque. It has her full name, her residence as Nashua, New Hampshire, and that she is still living. When looking at William's father it has his full name, William Joseph Webb and that he was born in Vermont. Notice that his residence is listed as "unknown". Whether he is alive or dead is also listed as "unknown". Because William's family has no idea where he is tells me that he, at some point right before the 1940 census, left them and didn't return. Whether he left of his own accord or met foul play.....at this point we just don't know.

Marie went on to marry again after 1940. She married Julius Kupchun and had more children with him.

That brings me to the end of this mystery. It's a brick wall, a big one. I have tried to pinpoint the particular William Joseph Webb, but there are many out there. Narrowing it down just isn't possible, at this point and only with the few facts I do have.

If you have any light to shed on this, please pm me. I would greatly appreciate it. 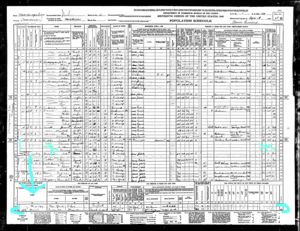 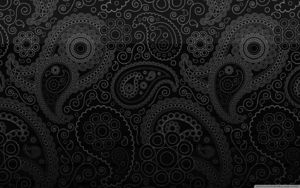 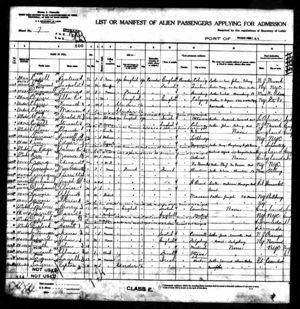 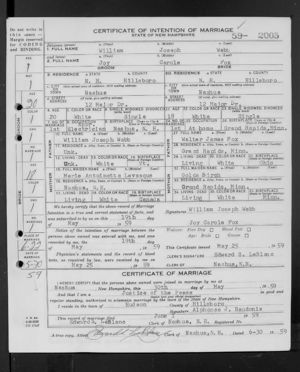 1930 Census for Joseph and Marie Murphy 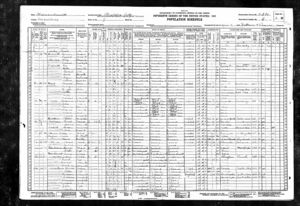