Please feel free to get involved with this topic and contribute and add to the profiles.

Purpose of the Topic

The 64 Westbridge Cottages were built in 1850 for the 7th Duke of Bedford. At the 1851 census there were 408 residents. This study attempts to follow those early residents.

History of the Cottages

in 1845, the Devonshire Great Consolidated Copper Mining Company began to mine what would rapidly become the world's most productive copper mine. A decade later more than one thousand miners were employed at the six different mine shafts, not to mention the railway and the specially constructed port that became necessary on the River Tamar where it became navigable at Morwellham Quay. The duke, who owned the land the mines were on and most of the town of Tavistock, arranged for new housing to be built. The Westbridge Cottages were part of this new building.

The Cottager's address to their Duke

The following is a copy of an address presented by a deputation of the occupiers of the cottages erected by His Grace at Tavistock, in 1850:

May it please your Grace – We, the undersigned, beg leave to offer to you our earnest and humble thanks for the invaluable boon conferred upon us; we refer to the Westbridge Cottages just erected on your Grace’s property in which we now reside.

Your Grace’s visits to our town would be a reproach to us if we did not gladly avail ourselves of the opportunity now afforded of acknowledging this deep and lasting obligation conferred upon us in having such homes provided for us at a rent like that we are to pay.

We are, your Grace, fathers of families, and up to this time have had to live, many of us in single rooms, with few comforts, - nay, few of the decencies of life; but your Grace, feeling with us, more than merely for us, has now provided houses in which we find all that we could desire in every way put within the reach of our small earning, and we cannot let you now depart without offering, from the bottom of our hearts, our thanks for sympathy like this.

We believe that your Grace’s Tavistock property does not stand alone in its labouring men thus feeling your Christian liberality and care. We hear that in other parts of England you have been first and foremost in thus building up comfort for the poor man’s home. If so, we only trust the more that your Grace will be richly rewarded for works like these – rewarded in this world by the cordial affection and unfeigned respect of all connected with you, and in the world to come by the blessings promised by God to those who never forget the poor.

We have the honour to remain, with humble and earnest thanks, your Grace’s obedient and dutiful servants.

Retrieved from the 1873 book The History of Bedford and Visitor's Guide by Thomas Allen Blythe (page 88). :

The Blocks and their Tenants

Blythe also lists the following table published in the Bedfordshire Mercury in 1850 at the Duke’s request:

Many thanks to Martin Allen for creating this Topic. 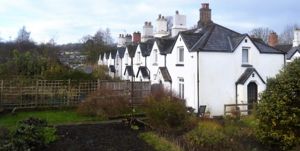